By Jenna Schnuer September 15, 2011
This story appears in the September 2011 issue of Entrepreneur. Subscribe »

Ted Williams' store on The Rock was in a hard place. After a grand Grand Opening for the 2008 holiday season, House to Home, his home décor shop in Mount Pearl, Newfoundland, faltered quickly. Williams, formerly an executive with Piper's SuperStore, a Canadian mass-merchandise department store, was heartened by the customer response during the first few months.

"Then I started messing up," he says.

His brain and business ways were stuck in big-box land. Within seven months, Williams had sunk $40,000 into advertising. "I applied what I had learned in terms of marketing from my previous stint," he says.

Although he'd originally planned House to Home as a higher-end home décor store, his marketing ways soon attracted a hodgepodge of customers who didn't like to spend much (the average sale was a paltry $22.50) and preferred browsing to buying (the conversion rate hovered just above 18 percent). And his inventory had started to tip toward hodgepodge, too.

Worse, Williams' strategy was a bust. "My plan was to get as many customers in as humanly possible and sell as much merchandise as possible, which is basically what we used to do at my last job," Williams says. "The place that I worked is almost like a mini Walmart. It carries everything from food to clothing to whatever--and you know, fliers out every week and that sort of thing."

Before and After Thrive
Sales through June 2011 were up 38 percent over the same period in 2009.

Though Williams had purchased a pricey point-of-sale system with a loan from the Canada Small Business Financing Program, that platform sat idle while his business tanked.

So he called Bill Jackman, a Newfoundland-based marketing consultant he'd met years before. The timing was just right. Jackman and his business partner, Andrew Goldsworthy, were in the midst of developing Thrive, a web app that encourages small retailers to track their business numbers and serves up targeted advice.

"We knew the expertise that a lot of these business owners really needed--the help that they desired--they couldn't afford," Goldsworthy says. "They knew there was something wrong with their business and sometimes they couldn't exactly put their hand on it, but to bring the expertise in to diagnose the issue--that's where the first problem existed."

The budget-friendly app was still a long way off when Williams first called, so Jackman stepped in as the human equivalent of Thrive.

"When [Williams] approached us, in his own words, he said, ‘I was literally two hours from getting my power cut.' He didn't know where to turn," says Jackman, who made several suggestions right away. He encouraged Williams to cut the cord on radio ads, start using the POS system to develop a relationship with his customers, work to increase average sales and start collecting "ideal brand customers" who would be both shoppers at and evangelists for House to Home. 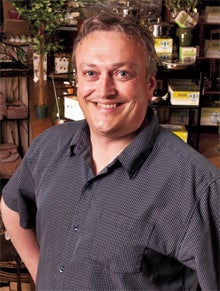 Now House to Home's average customer sale is around $35, and the conversion rate is 40 percent. Sales through June 2011 were up 38 percent over the same period in 2009.

Before the app launched, Williams fed the stats he collected at his store to Jackman and received advice in return. He also gave the Thrive team feedback to help them gauge what kind of assistance small retailers needed most. Now he's getting to see his input in action. Since Thrive's web app launched in mid-2011, Williams has been using it to run his numbers and collect further recommendations.

After an initial setup, users enter daily sales figures into Thrive and get their "business vitals" in return. Williams uses that information to see "how I'm tracking in terms of where I am and where I want to be," he says. Thrive even helps users understand if their time investment into social media is paying off.

"As [businesses] continue to use the system they will continually get new recommendations," Goldsworthy says. "As their situation improves, they'll get strategies and recommendations that will help them improve even more. It's kind of like a continuous improvement loop."

While in beta, Thrive costs $20 per month. The cost will increase to $49.99 per month once the service is fully up and running.

The Thrive team plans to amp up the app's services and advice as time goes on. Thrive is in talks with retail experts to add their recommendations to the system and have started providing customers with digital traffic counters that will integrate with POS systems. And as a finalist in the Intuit Partner Platform Apps Showcase (winners were announced after press time), Thrive could get a serious business boost of its own. The winning app will be integrated into the Intuit Partner Platform, so users could easily send info from QuickBooks to Thrive.

Williams admits he still has his bad days ("It's like any startup business"), but he's feeling far more confident than he was a year ago. "I made it through 2008 [and] 2009--I can survive anything," he says, adding that he's even considering opening a second House to Home location. That store, of course, will run on Thrive from the get-go.