How to Make Employee Training a Winning Investment

By Gwen Moran November 4, 2011
This story appears in the November 2011 issue of Entrepreneur. Subscribe »

When Javier Muchado joined Gentle Giant Moving Company in 2004, he thought he would be there for a few months and then move on. But Larry O'Toole and John "J.P." Pacocha, the Somerville, Mass.-based company's owners, had other ideas. They observed Muchado on a few jobs and recognized that he was physically strong and smart--a winning combo for a business that requires equal measures of muscle, troubleshooting ability and people skills. 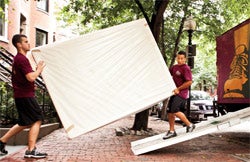 Muchado--who sailed through the company's two-day training period, which focuses on basic moving skills--easily could have gotten stuck in a basic role. With his quiet demeanor and shy nature, he was often the "silent helper" on jobs and was reluctant to take a bigger role in the company. "I wanted to do small jobs, not big jobs. I was always afraid of driving [the bigger] trucks," he says.

However, with the encouragement of the company's management and some one-on-one training, Muchado began to overcome his fears, and when a co-worker was injured, he nervously stepped in to oversee the job. Since then, Muchado has taken on increasingly larger roles and received several promotions, moving from a strong, silent helper to a sought-after driver, crew chief and trainer. 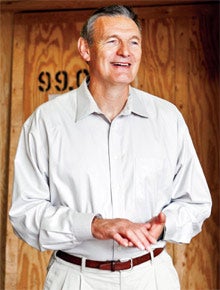 Gentle Giant's training program wasn't always sophisticated; formalizing and developing it has been key to the company's success, O'Toole says. In the early years of the company (founded in 1980), O'Toole trained everyone himself. However, by 1998, Gentle Giant was hiring as many as 50 seasonal employees. At that point, Pacocha says, the company needed a more structured approach. A full-time director of training was hired and a formal, two-day, hands-on introductory session was created to teach new "Giants" how to meet the company's quality standards.

That devotion is unusual for small businesses, which often look at training as an optional expense, says Rick Conlow, co-author of SuperSTAR Leadership Model and co-founder of WCW Partners, a Minneapolis-based sales, leadership, customer service and training firm.

The American Society for Training & Development (ASTD) has found that companies with fewer than 500 employees devote fewer training hours per employee than do larger companies--and they spend more per employee. That's because it's hard for small companies to avail themselves of some of the large-scale training options, such as bringing outside trainers on-site, says Pat Galagan, executive editor of the nonprofit membership association. However, smaller businesses should make training a priority, she says: "Because of all the turmoil from the recession, new demographics in the work force and the influence of technology, it has created a climate where ability and innovation are extremely important for companies to grow and thrive. That means acquiring skills in those areas."

Types of Training
Training comes in many forms. Beth Goldstein, an adjunct professor at Boston University and founder of Holliston, Mass.-based Marketing Edge Consulting Group, consults with small businesses that are trying to grow and runs training programs throughout the U.S. She says choosing the right program depends on the resources of the business and the type of training required: If your aim is to solve a very general problem or something that can be mastered in a classroom setting with interaction, it may be a good choice to go to a respected off-site training program; however, depending on the number of people being trained, it may be more cost-effective to bring a trainer on-site. Many training programs offer that option for larger groups.

How to Train
Ready to get the most out of your employees? Start by teaching them right.

Pinpoint sectors that will most benefit from a training program. Spot specific areas of your business in which training will help to produce revenue, increase productivity or reduce inefficiency, says Rick Conlow, co-author of SuperSTAR Leadership Model.

Define your metrics. Before putting a program in place, outline your version of success, says Boston University adjunct professor and consultant Beth Goldstein. Be specific about what you want to achieve, whether it's a 5 percent increase in sales or a 10 percent improvement in your customer satisfaction score.

Look for a hands-on approach and follow-up elements. The most effective programs include role-playing or other interactive components in which trainees are "experiencing" while they learn. That's the best way to make the information stick, Conlow says. Make sure your employees, once trained, have access to follow-up information and tutelage.

Share the wealth. When employees return from external training, have them engage in some form of show and tell to get more mileage out of your training dollars, Goldstein suggests. This could take the form of a presentation, video or other format.

Go beyond 101. Advanced training in leadership and management skills can groom promising individuals for senior posts within your business, which will save you the time and expense of recruiting people from the outside who may not fit into the company culture. --G.M.

At IT consulting firm Digineer in Plymouth, Minn., founder and CEO Michael Lacey instituted a peer-to-peer training program, Digi-U, to allow employees who are particularly knowledgeable or enthusiastic about a topic to share it with their colleagues. Digi-U also provides a platform for employees who have received external training to take their newfound knowledge and pass it on to others in the firm, extending the value of each external training investment. One recent Digi-U program on project management was so successful that two follow-up sessions were held. What's more, Digineer reimburses employees for certain external training programs and offers two weeks paid time off to attend.

San Francisco-based Thumbtack.com, an online consumer marketplace for local services, has routinely added 10 new employees in the Philippines each month for the past year, for a current total of 120. Company founders Sander Daniels, Jonathon Swanson and Marco Zappacosta developed an in-house training program in late 2010.

"We saw that with each new hire, we had to repeat the same basics about our company. So, we spent two weeks putting together about 12 training documents and a dozen training videos that review every aspect of our business," Daniels says.

While the training program varies by job, once Thumbtack's new hires review the documents and YouTube-hosted videos--which Daniels says cover employment policies and business operations--they move on to a breaking-in period of two to four weeks, during which they work on the easiest tasks associated with their jobs and receive regular feedback from supervisors.

After that, managers engage in ongoing training, providing weekly feedback and access to "knowledge databases" with answers to frequently asked questions and information about best practices. Some staffers in the Philippines have weekly Skype calls with the San Francisco team to review their progress.

Videos, webinars and the like can be appropriate for disseminating introductory-level information, author Conlow says. But, he adds, the most effective training programs have the kind of backup that Daniels describes, which reinforces the concepts and allows for personalized support if an employee isn't immediately "getting it."

Of course, it's not always as simple as, "Train them and you will earn." ASTD's Galagan advises against "sheep dipping"--offering management or project-development training to absolutely everyone.

Conlow agrees that training should be specifically focused. "You have to be a student of the game and know your business," he says. "What are the areas where you're weak? What areas would improve productivity or sales? Where are you losing money and how can you improve that? Those are the questions you need to ask yourself."

When developing an in-house program, it may be a good idea to work with a training professional to identify the best format for your employees to learn, he adds.

Reaping the Benefits
Effective training can offer significant bottom-line benefits. Daniels estimates that Thumbtack's program is worth approximately $10,000 per month in time saved. At Digineer, Lacey has found that investing in training has increased sales: One entry-level employee who took advantage of the company's paid-time-off and reimbursement programs to earn additional certifications increased his billing rate from $125 per hour to $175 per hour, resulting in about $100,000 of additional annual revenue for the firm.

Gentle Giant's team has found several areas of savings. The company estimates that an efficiency program that trained crew chiefs and managers to spot and reduce "white slips"--time on a job that was not billable to the customer, such as truck preparation or transit--has saved more than $100,000. Another important area of return has been in employee retention. Pacocha says turnover hovers around 6 percent per year, which the team credits to its robust training programs that support planned growth opportunities. "We've saved about a half-million dollars by not having to replace people and being able to promote our own people into new roles instead of recruiting," he says.

For employees like Muchado, the benefits go far beyond the business.

He says the training he received at Gentle Giant has changed many aspects of his life. "I've always been afraid to interact with people, but because of the training I have more confidence. It's helped me improve myself," he says. "I don't think I could ever leave here. I love the culture and the opportunities I have."