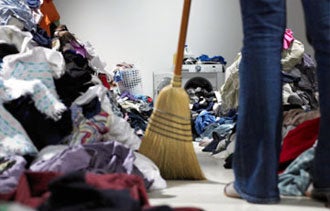 As I write this, I'm on a 10-hour train ride from Cuzco, Peru, to the shores of Lake Titicaca, the highest navi-gable lake in the world. For the past three weeks, I've been hiking the Peruvian Andes, living out of a 46-liter backpack--and I'll continue to do so for three more weeks.

Whenever I travel like this--carrying only my camera, my laptop and a few changes of clothes--I'm struck by how little I need to really be happy. If I can get by with a handful of possessions on the road, then why do I need so much stuff at home?

Related: Why Your Business Should Be a Great Workplace

We Americans live in a materialistic culture. It's part of who we are. And there's nothing wrong with owning things that make life easier or make it more enjoyable. But like many people, I've begun to discover that I own too much stuff, and that this materialism carries a high price.

Stuff costs money: It costs money to buy, money to maintain and money to store. It even costs money to sell. Plus, there's a very real mental cost associated with owning too much stuff: You think about it and worry about it; it becomes a burden. (Remember the quote from Fight Club: "The things you own end up owning you.") What can you do to guard against the invasion of stuff? Here are some ways to keep your life clutter-free:

On the first night of my Peruvian odyssey, I met my roommate, Stephen. He'd flown from Sydney to Lima, Peru, by way of Buenos Aires, Argentina. Somewhere along the way, the airline lost his luggage. "Bugger.

I don't know what I'm going to do," Stephen told me that first night. "Everything I need was in those bags."

Related: The Year of Living Dangerously

But for the past three weeks, Stephen has managed just fine. "I never thought it was possible to travel without heaps of stuff," he told me, "but I was wrong. In many ways, this has been liberating."

Travel is instructive. It teaches us about who we are and what we value. From this trip, I've learned that stuff is less important than I thought it was. When I fly home from Lima in a few weeks, I'm going to spend some time evaluating the things I own.