An aviation enthusiast's invention leaps from the road to the wild blue yonder.
Next Article Add to Queue

"Aha" moment: In 2004, the Federal Aviation Administration eased regulations related to developing light sport aircraft and acquiring licenses for operating them. "That's what got me thinking about doing something entrepreneurial in aviation," says Dietrich, Terrafugia's CEO and CTO, who got his bachelor's, master's and Ph.D. from the Department of Aeronautics and Astronautics at MIT. In 2006, he and his co-founders (three of the original five remain with the company) launched Terrafugia--the name is Latin for "escape the earth."

Taking off: Terrafugia was initially funded with $40,000 after Dietrich won the Lemelson-MIT Student Prize for Inventiveness and the company's business plan was a runner-up in the MIT $100K Entrepreneurship Competition. The team brought a model of the concept to Wisconsin's EAA AirVenture Oshkosh, the largest annual U.S. gathering of aviation enthusiasts, and convinced seven people to put down deposits on vehicles. In December 2006, Terrafugia closed on a $250,000 first round of investment. In 2009, The Transition completed flight tests in Plattsburgh, N.Y. To date, Terrafugia has brought in more than $7 million from angel investors and others.

Why? Beyond his lifelong fascination with "aviation, aerospace, spaceships and airplanes--all that sort of fun stuff," Dietrich wanted to create a unique product with a big impact that addressed the standard obstacles faced by recreational pilots: weather sensitivity, high ownership costs and the little or no ground transportation at public-use airports. Dietrich and his team determined that "all of these problems could be solved if we had a flying car," he says. 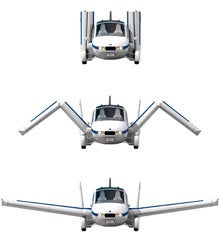 The Transition converts in 20 seconds and gets 35 miles per gallon on the road.

The Transition's wings can be folded for driving and extended for flying from inside the cockpit. It is fuel-efficient (35 miles per gallon on the road), and its small size alleviates the need for hangar storage--it can be kept in a garage. "We've not only proven that we can make a vehicle that flies and drives and converts in 20 seconds, but we've also overcome all the major regulatory barriers," Dietrich says.

Customers: The prime demographic is retired or near-retired recreational users, Dietrich says, as well as business travelers. Only about 10 percent of early adopters are not pilots.

Marketing: Terrafugia is focusing on aviation trade shows to market its product. "Terrafugia really is the first company that I think has a realistic shot at creating what the pop culture's vision of a flying car is," he says, "but it's going to be done in stages and in concert with regulatory evolution."

Up next: Terrafugia is testing two production prototypes and plans its first customer delivery by the end of this year. A controlled rollout with low-volume production is planned for 2013, Dietrich says,"so it can be done in a very safe way."