How to Become Your Company's Storyteller

Piles of credit card debt. Sleeping in parents' basements. David-and-Goliath showdowns. These are just some of the popular elements of startup mythology that show up on the "About Us" pages of company websites--and with good reason.

There was a time when a company's "About Us" page didn't matter quite so much: A short bio, a mission statement and boom, done. These days, corporate-weary consumers care more and more about buying locally, supporting independent businesses and owning products that are made sustainably and responsibly. They want to know the story of what they're buying, who is selling it and what causes it may support. In a business landscape where success hinges on establishing a personal connection with customers and investors, the "About Us" page has become prime real estate. 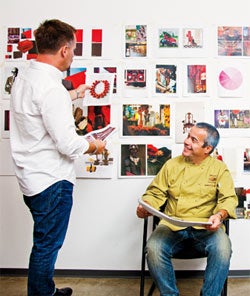 His tale begins in 1999, when the native of Venezuela ditched a 14-year career in that country's telecoms industry for a longtime dream: becoming a chef. He went to France to study cooking, and three years later, returned with his brother Richard to Southern California--where they'd been undergrads at the University of California, San Diego--and opened their chocolate company.

"I like to say I went from following my ego to following my passion, and this really speaks to our customers," says Antonorsi, showing off the goods in Chuao's flagship cafe in La Jolla, Calif.

The company has grown to encompass a factory in Carlsbad, three retail locations and national distribution through high-end chains like Whole Foods Market and Crate&Barrel. Antonorsi's bars and truffles--such as the Parchita, with fresh passion fruit and soft caramel--have scored food awards, magazine placements and TV spots.

Chuao's "About Us" page is a straightforward narrative that focuses on the brand's Venezuelan heritage: that it is the first chocolatier from that country based in the U.S.; that it is named for a famous cacao-producing region; and that the Antonorsi brothers come from a long line of cacao farmers. "We always thought the story was important, because every time we told it, we would get attention," Antonorsi says. "But we never capitalized on it enough, because we've been so focused on what we are creating that we never considered what our audience really needed to hear."

Now, Antonorsi wants to make this legend a bigger part of the business. In June, Chuao plans to roll out a revamped brand experience in which every element--the website, colors, logos, packaging, core values--will have a stronger tie to the company's story.

To accomplish that, he brought in Shawn Parr, founder and CEO of San Diego innovation and design consultancy Bulldog Drummond, which counts startups as well as Fortune 500 companies among its clients. According to Parr, early stage companies often overlook the importance of telling their story--a major oversight, because when a personal or company history is consistently and effectively articulated through products, services and branding, it can generate customer loyalty and help a company stand out from competitors. 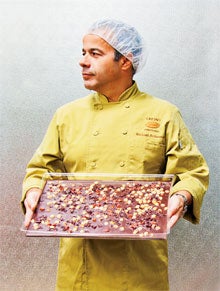 In Chuao's case, Parr says the company should retain the story of its proud heritage but can better communicate its passionate belief in high-quality, natural ingredients and its focus on unusual flavor combinations. "Our naming process can be confusing," concedes Chuao CEO Sergio Alvarez. For example, he says, some customers might not be drawn to a confection simply because it is named "Caracas," but chances are they'd be interested if it were immediately obvious that it contains dark chocolate with toasted hazelnuts, pistachios and almonds.

Additionally, and perhaps most important, the voice and language on Chuao's "About Us" page, as well as the brand's logo and color palette, will be revised to better reflect a premium chocolate company with a more playful personality than big-name competitors such as Godiva and Lindt.

Related: How to Get Customers to Help Build Your Brand

This is a strategy endorsed by Neeru Paharia, co-author of a Harvard Business Review paper titled "Capitalizing on the Underdog Effect." She says a company can benefit by positioning itself against giant competitors through storytelling. In a series of studies, Paharia and her colleagues assigned biographies (underdog, top dog, victim and privileged achiever) to various types of companies and presented them to focus groups to see what resonated. In one study, 71 percent of participants indicated they identified most with businesspeople who had overcome "external disadvantages" (competition, lack of resources or doubting friends and family) with passion and determination.

"People love underdogs because they identify with them and this idea of the American dream, where you can pull yourself up by your bootstraps," Paharia says.Such tales have proved successful for Clif Bar, whose owner talks of once living in a garage, and Nantucket Nectars, which started with "a blender and a dream."

Since all startups are underdogs, constructing a good narrative is a way to inspire and connect with customers and investors, Paharia says. "You can talk about being eco-friendly and a locavore, committed to artisanship or family, or having historical authenticity--this influences how people perceive you, and can turn disadvantages into competitive advantages."

People and Products
Crafting an effective story was crucial for Erin Condren, founder of online custom stationery store erincondren.com, which launched in October 2005 as a tiny home operation; now it has more than 50 employees. Condren took great pains to convey her personal story on her website, talking candidly about her transition from a career in fashion to becoming a mother of twins, an unsuccessful stint creating children's videos and her fears after going two years with-out income. Condren includes a blog, full of photos of her family and friends, and a section of "favorites"--unrelated products and services she enjoys.

Condren says having a human face behind the brand facilitates an emotional connection with customers, many of whom send her e-mails sharing their personal stories and asking for advice.

"I can't tell you how many people have told me, 'I went to your "About" page,'" she says. "My name is on the business, and I wanted my demographic to relate to me in the beginning, so I knew I had to put a lot of time into the story."

In addition to personal histories, companies can tell great stories about their products. (This concept was taken to the extreme in the 1980s and '90s by apparel manufacturer The J. Peterman Company, whose catalog spun quirky yarns for each item--a strategy that was mocked mercilessly on Seinfeld.)

The website for Stauer, a Burnsville, Minn., retailer of jewelry, watches and accessories, not only gives president Mike Bisceglia's bio, but relays the "history" behind every item. Consider the description of a Machina watch, which goes something like this: According to legend, an 18th-century Paris watchmaker seeking attention for his small workshop removed the face and plates to reveal the inner workings and delicate skeleton of his timepieces. A fascinated public flocked to his door.

Bisceglia says such storytelling distinguishes Stauer from the competition and resonates with his target audience: educated men with disposable income, often buying gifts for women. In 2010, sales topped $200 million; 2011 sales are estimated at $280 million.

"A lot of business owners fall in love with their own product and forget that other people need to be romanced by a story," Bisceglia says. "A brand should make you feel something when you say the name. Without context, it's just stuff."

These days, having that "About Us" page paint a complete picture is more important than ever, according to LLR Consulting's Rubin. "We have fewer discretionary dollars, so we want to feel good spending that money," she says. "Whether the story is about sustainability, buying local or being an underdog, we want to feel there's a person behind the company that we're buying into, and that there's a sense of purpose we can relate to."

"Good stories open doors," says Laura Rubin, a branding expert and founder of New York-based LLR Consulting. "Without one, you may not get the attention you deserve."

Brainstorming Session
LLR Consulting founder Laura Rubin says her first step in creating a compelling story for clients is to ask them "nosy, rude and irrelevant" questions. "There's rich 'About' page fodder to be found in personal history," she says.

If you're brainstorming on your own, keep these tips in mind:

Effective Messaging
If anyone understands the elements of a good story, it's this guy: Peter Guber, chairman and CEO of Mandalay Entertainment Group, who has produced or executive produced films that, in total, have grossed $3 billion worldwide. He's also the author of Tell to Win, a book about how purposeful stories are the best way to persuade, motivate and lead people in business. "Stories with emotional propulsion move people to action and naturally shorten the distance between companies and customers," Guber says. He suggests you address three questions:

Who is your audience? Consider the gender, demographics, industry, interests and situation of your customers, employees or investors, then tailor the narrative to them. "If you're trying to be interesting instead of being interested in them, you'll never convert listeners into advocates," Guber says.

What is your goal? Make sure you know exactly how you want your audience to act after hearing your story. Do you want them to buy your product? Join the company? Invest? Stories can power you toward a goal only if the message is crystal clear.

Is your story genuine? A purposeful story is emotionally compelling. Provide believable, personal context. Suppose you're telling the story of a company that sells golf clubs. "Don't claim you can play like Tiger Woods with them," Guber says. "You'll have more success with a story about how the clubs took 10 strokes off your own game."