Singing the Joys of the Detroit Airport 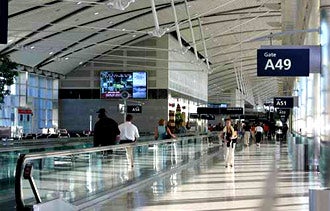 What makes an airport great, or even serviceable? Flying into the McNamara Terminal at the Detroit Metropolitan Wayne County airport recently, I considered the question.

I'd been a big fan of Detroit's airport in the mid-2000s, near the end of Northwest's run, when I found myself frequently changing planes there. The monorail connected distant gates within minutes. Corridors were wide and bright. There was even a high-quality sushi bar that catered to the Japanese businessmen who came to town for the auto industry.

"The last great thing Northwest ever did," says Randy Petersen--whose InsideFlyer magazine has spawned websites and brands that include FlyerTalk, MileageManager and SeatExpert--"was pump money into that airport."

Maybe all that investment left the carrier vulnerable when the 2008 downturn hit. I don't know. But in October of that year, Delta spent $3 billion to swallow up Northwest, McNamara Terminal gate slots and all.

Recently, I went back for the first time since the merger. I was anxious to learn if Delta was treating McNamara as well as Northwest had, especially since Atlanta, Dallas and Minneapolis seem to be the airline's priority hubs. When I arrived I didn't get on the tram, because I wanted to walk the concourse. It was even more spacious than I'd remembered, more like something you'd find in a top European airport, such as Munich or Barcelona, than the cramped, claustrophobic hallways of, say, Atlanta and Dallas.

It was lunchtime, and I headed right to sushi at Sora (which, I learned, has lately opened an outlet at Liberty Airport in Newark, N.J.) at Gate A35. My futomaki was authentic, though prices were seriously steep.

Runway Runners-up
As a business traveler, all you need to know about travel guru Randy Petersen's bona fides is that he has 13 million frequent-flyer miles. I was happy to learn Petersen also thinks Detroit Metro might be the best airport in America. "All in all, my favorite," he says. Here are three other contenders:

Minneapolis-St. Paul International Airport:
"It's a pleasure to spend time there. They've redone all the restaurants, and you can find some really good food from some of the local Minnesota brands." Among them: D'Amico & Sons Café and Ike's on Summit.

Boston Logan International Airport:
"I enjoy the local flavors [Legal Sea Foods, Boston Beer Works] there, too. It gets a lot of flack because of what it used to be like before they made some improvements, but now I think it's really an underrated place to fly in and out of."

Ronald Reagan Washington National Airport: "Clean and easy. The new terminal [Terminal B/C] is terrific. And I don't think I've ever waited at security more than five minutes."

While I ate, I pondered what makes a good airport. Sensible geography is a must. That means no lugubrious people-movers like those at Washington Dulles; no airlines with gates spread across distant terminals, as Delta has in Atlanta; and no satellite terminals that require stop-and-go shuttle bus rides across the runways, such as in San Francisco.

These days, the layout of the security checkpoints and how well the TSA staffs them can affect your travel as much as anything else. So the epically long lines at the US Airways terminal disqualify Philadelphia, while the lack of a premium lane demerits Baltimore/Washington International.

Running down the checklist, I realized that Detroit qualifies on every count. Especially considering it serves a top-10 market, it's surprisingly easy to retrieve bags, rent a car and get out on the highway. (It's a long way from downtown, sure, but these days most business in Greater Detroit is transacted in the suburbs.)

I was visiting a nearby company on this trip, so I pulled my carry-on directly into the new Westin, which ranks with Vancouver's Fairmont as the nicest in-terminal hotel I've visited. The next morning, I passed through the empty security checkpoint off the hotel's lobby, where the ratio of TSA agents was three-to-me. My room had been so close to the gate that I could have stayed in it longer--but I wanted a hummus-and-pita breakfast at the Mediterranean Grill on the concourse.

These days, the major airlines are all pretty much the same. But their hubs aren't, and they can mean the difference between an easy trip and an onerous one. Most of us will still base our ticket-buying decisions on price, schedule and frequent-flyer programs, but you can bet I'll also be factoring in that futomaki.

Corrections & Amplifications: The image on an earlier version of this article was not the McNamara Terminal at the Detroit Metropolitan Wayne County Airport. It has been updated.