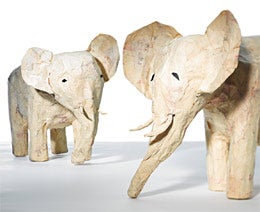 "There's a lot of crap out there sold by a lot of companies, and they pretend it's not crap. Could I actually sell product that is crap?"
--Michael Flancman, PooPooPaper
Photography by Devon Jarvis

Entrepreneurs: Michael Flancman and his wife, Tun, created Toronto-based PooPooPaper, a line of recycled paper products made from, as the name suggests, poop. The odorless stationery, notepads, greetings cards and journals are crafted from a pulp made with the dung of fiber-eating herbivores such as elephants, horses, cows, donkeys and pandas.

"Aha" moment: "There's a lot of crap out there sold by a lot of companies, and they pretend it's not crap. Could I actually sell product that is crap?" Flancman wondered after meeting a papermaker who was experimenting with products made from elephant dung. "It was so bizarre and interesting," Flancman says. "I thought there was a sexiness to it--to the story and to the idea of taking something that seemingly has no purpose and giving it a purpose and making a wild product out of it. I thought it was a unique niche that might be fun to market."

What possessed them? In the early 2000s the Flancmans were living in Thailand, exporting handicrafts made by local hill-tribe people. They leveraged their skills to create a small collection of the eco-friendly papers and sent it to a zoo in Flancman's hometown of Toronto to test the idea's viability. The products flew off the shelves. In 2005, the couple incorporated and spent about $100,000 of their savings to get into as many zoo gift shops as possible.

Why? Flancman initially used just elephant, er, leftovers, thanks to the animal's large population in Thailand. As PooPooPaper gained steam, he started using the waste of other animals with fibrous diets. "There's an underlying message of sustainability, which we want to convey, but we want to do it in a fun, memorable way." Flancman is proud to provide employment and wages to the artisans who create his products in Chiang Mai: "We're helping them continue a craft that's been part of their local livelihood for hundreds of years."

Drop a line: As the U.S. presidential election draws near, Flancman is focusing on a "poo-litical" collection made from donkey and elephant waste, with slogans like "There's an ass in every party"; "Eliminate log jams in the Congress"; "Dung stop believing"; and "I'm behind our nation's freshest new movement."

Sales: PooPooPaper products can be purchased online, but Flancman sells mostly to retailers and institutions such as Busch Gardens, the San Diego Zoo, the Smithsonian Museum and Chicago's Shedd Aquarium. Buyers cover the age spectrum, from 18 to 55, and kids are also big fans.

Cost: Products are priced from $5 (for individual greeting cards) to $65 (for sets).

Up next: Flancman expects revenue this year in the seven figures. Meanwhile, he recently expanded into another line of goods made from alternative-fiber materials such as pineapple and corn husks, hay and coconut shell hair.