How to Get Back on Track After a Business Trip 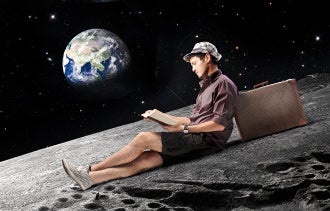 Baseball tryouts? But wasn't it just soccer season? Many of us who travel delude ourselves into thinking that life when we return from a trip will be the same as it was when we left. We assume we can pick up where we left off with our spouse, our kids, our friends.

It won't, and we can't. Traveling for business can feel like one of those science fiction novels in which a spaceman takes two years journeying to a distant planet and returns to find that two decades have passed at home. It's amazing how the world turns when we aren't there to experience it.

What's the remedy? Traveling less, sure, but that's usually not an option. Keeping in touch from the road, but you already try to do that. Faced recently with a week on an upside-down schedule in the Middle East and then at least another week adjusting to home life on my return, I started asking around about a better way.

The first step to staying connected, says Newport Beach, Calif.-based clinical psychologist, author and lecturer Dr. Robert Puff, is to have connections to begin with. If you've taken the time to participate in a regular tennis game, have date nights with your wife and know the topics of your kids' term papers, your reentry process will be that much easier.

It also helps if you've stuck to a regular communication schedule on the road, such as a bedtime call each night or a check-in with friends via e-mail or Twitter, almost as if you were in your office or living room. Try to set up something that you can look forward to doing together when you get back, like a picnic or movie night. That won't just get you updated, but will also create a new experience to share.

Keep in Touch
Paper Trail: Create--and mail--paper postcards from your iPhone or Android. Download the Postagram app, choose a photo and write a note. The service will ship your card for 99 cents to U.S. addresses, $1.99 to non-U.S. addresses.

Moving Pictures: Share your trip with family and friends. Viewings on Givit's free video-sharing service are by e-mail invite only. Available online at Givit.com and as an iPhone or Android app.

Playtime: A business trip is no reason to miss family game night. Log onto free service Ohanarama.com for games that entertain kids while you find out about their day through a video chat system. --Katherine Duncan

Even if you've kept in touch, you need to know that life will have changed at home. "Maybe your child has lost a tooth, or has a new best friend," says Ellen Galinsky, co-founder and president of the New York-based Families and Work Institute. "Understand and accept the landscape. Don't try to impose your view of reality." And go easy with war stories to a spouse or friend about the client who kept ordering more drinks at that bar in Paris.

"You've had these dramatic experiences, but back in the neighborhood it's often whose dog is following whose," Galinsky says.

It's tempting to cram 48 hours of work and play into a day to make up for the time you've been gone. Puff advises against this. "When you're with the people you love, be with them," he says. "Pay attention. Stay in the moment. Get rid of the mind chatter."

I thought about that as I drove my son to a baseball clinic in a neighboring town. I didn't make calls from the car or surreptitiously check e-mails, didn't plan out the week's schedule in my head. Instead, I spent the ride catching up on not just what my son's been doing, but also on what he's been thinking.

Later, I took my 4-year-old to lunch and saw a movie with my wife. Less than a week after returning, I actually felt up to speed. Were it not for the jet lag, I could almost pretend I'd never been gone.

When in Ukraine...
Toasts with strong alcohol while doing a deal are standard operating procedure. And it's part of the culture that businessmen inevitably show up late to meetings and negotiate by saying no, often in dismissive terms. Don't despair, though. The yes often comes at the very end, as you're heading toward the door.

If your wife's cousin's ex-roommate is a government minister, you're in. Official contacts are prized in this bureaucratic country. Don't have an in? Prepare for multiple requests for documentation you've already submitted and seemingly endless rounds of permits and inspections.

Given that context, the strong alcohol probably makes sense.