Among the lasting cultural innovations this country has created, the chain hotel ranks up there with the personal computer and the hot dog.

When U.S. businessmen took to the road en masse after World War II, deciding where to sleep was a perilous undertaking. As the sun set, they'd pull off the highway and into the lot of an anonymous motel. It may have been clean or squalid, secure or unsafe. With no recognizable name, let alone a TripAdvisor rating, who could say?

Chains such as Holiday Inn gave us the security of knowing exactly what we were getting, right down to the regulation-issue slab of soap. But we're way past that now. As a modern business traveler, I'm bored with sameness. I can navigate a Residence Inn room with my eyes closed and recite the Westin breakfast menu from memory. So I'm always looking for a hotel that looks and feels like nowhere else. At the same time, I'm loath to surrender the perks I've earned from frequent-stay programs--suite upgrades, free internet, points toward a future vacation--and the reassurance I feel from seeing a familiar name on the sign.

Fortunately, the big hotel chains are thinking like I am. In recent years, nearly all have started acquiring properties--many in retrofitted historic buildings--that have personalities all their own. "I think, in general, our industry is getting away from that cookie-cutter mentality," says Janis Milham, vice president and global brand manager for Courtyard by Marriott. "We recognize that customers are looking for variety."

Recently I visited a Westin in Columbus, Ohio, in a 19th-century building that once included an opera house. A Courtyard by Marriott in Kansas City is in a 1925 apartment house listed on the National Register of Historic Places; there are antique milk closets in the halls. The Residence Inn in Hartford, Conn., is in a former department store by renowned architect Henry Hobson Richardson.

Most cities have such a property, usually under the umbrella of a major brand. When the location and price are right, I always try to book one. If the level of service and facilities matches the ambience, it can make a trip.

That's how I felt when I discovered the Stanford Court Renaissance in San Francisco. I paid less than $200 and earned a stay toward elite status. I even got upgraded to a suite. It had an unusual layout, making nighttime navigation a challenge. But after so many nights spent in rooms I could stroll through in my sleep, I was perfectly happy to switch on a light to find my way. 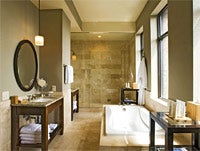 Hotel Ivy, Minneapolis. A Depression-era tower built for the Second Church of Christ Scientists, the Ivy debuted as a luxury hotel four years ago. The ziggurat style evokes ancient Persia, the high ceilings and spaciousness make even standard rooms feel suite-like, and the spa ranks as the city's finest. 201 S. 11th St., starwoodhotels.com 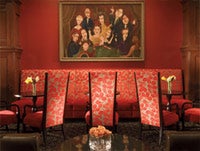 Skirvin Hilton, Oklahoma City. Exquisite detailing--and the lobby's blood-red color scheme--makes this historic hotel unforgettable. First opened in 1911, it was relaunched as a Hilton in 2007 after a massive renovation. Rumor has it some ghosts stuck around. 1 Park Ave., hilton.com 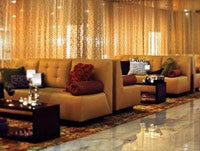 Stanford Court Renaissance, San Francisco. Built in 1912 on the post-earthquake rubble of Leland Stanford's former mansion, the Stanford Court, with its L-shape design, driveway fountain and stained-glass dome, evokes the Nob Hill of the 1920s. Aveda toiletries, a touchscreen information system in the lobby and a locally sourced menu are very much of today. 905 California St., marriott.com

When in Sri Lanka...
Blunt, plain speaking is perceived as a positive attribute in American business. On the island nation of Sri Lanka, it'll quash a deal fast. Sri Lankans are nonconfrontational, bordering on opaque. They'll rarely say no and will never criticize. But the real message is hidden somewhere between the words, so listen hard.

Titles are important, so make sure yours is on your business card; when presenting the card, use two hands. Shake hands only with others of the same gender, using last names or "sir" and "madam" until told otherwise. Be prepared for intuition to trump logic, and for completed deals to be vetted by the family astrologer.