Young Entrepreneur Challenges the Way Americans Think About Their Cellphones 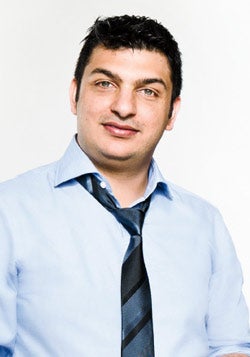 In the fall of 2004, when 18-year-old Pakistani squash champion Ahmed Khattak arrived at Yale to play for the university and take advantage of a full academic scholarship, his first priority was to buy a cell phone to call his family back home. But he couldn't. With no Social Security number and no established credit, he wasn't able to get a cell phone service contract.

"I couldn't believe it," he says. "I'd just arrived in the most technologically advanced country in the world, and no one would sell me a phone."

Eventually, his roommate co-signed for a phone. But throughout his studies in electrical engineering and history, Khattak remained bothered by the peculiarity of the U.S. cell phone business model, which forces consumers to commit to pricey two-year contracts, with onerous fees for cancellations. He was also less than thrilled about the $50 per week he was spending on calls to his family in a remote region of Pakistan.

It was a 2007 internship in London, however, that provided the spark that would become his startup, GSM Nation. "At the airport in London, I walked out of customs and right up to a vending machine where I bought a £15 ($23) SIM card for my phone to make calls at cheaper local rates," he says. "I thought, Why can't America be like this?"

After graduation, he got his chance to do something about it. With his student visa set to expire and facing bleak job prospects back home, Khattak moved forward with his idea for an e-commerce site that would show Americans the money they could save by approaching mobile the way most of the world does. At GSMNation.com, consumers buy manufacturer-unlocked phones, which can be used with any network, and then sign up for significantly less expensive month-to-month voice, text and data plans through a third-party carrier such as Simple Mobile or H2O Wireless that resells blocks of voice and data they've purchased from T-Mobile and AT&T.

For help negotiating the ins and outs of building a business in the States, Khattak turned to the Yale Entrepreneurial Institute, which also helped settle his visa issue. For funding, he turned to his dentist--yes, his dentist--for a $200,000 investment. In March 2010, Khattak sold his first phone; by the end of the year, he'd grossed almost $9 million.

For individual consumers and small businesses, it's easy to see why GSM Nation has been so successful--the savings add up. Khattak convinced his PR agency, Astonish Media Group, that switching would result in savings of $10,000 a year. "Each month, my six-person [senior staff's] cell phone bills ranged from $1,200 to $1,700," says Astonish president Paula Conway. "It was expensive, and I never knew what to budget for. When I get all of our phones set up through GSM Nation, my bill will be $360 per month, end of story."

Kevin Price, who negotiates wireless and wireline mobile contracts on behalf of enterprise companies for G2, is also a proponent. "If you have 10 or so people in your company, the type of service GSM Nation provides is a viable option," he says. "And if you travel out of the country regularly for extended periods of time, the pay-as-you-go model becomes attractive."

Khattak's message is catching on. In 2011, he booked $35 million in sales of phones and a $5 commission for each customer activation with a carrier listed on the site. For 2012, he expects to gross $50 million. "When I got to America, I had no intention of becoming a millionaire," the 26-year-old says. "I started GSM Nation simply to show people a better way."