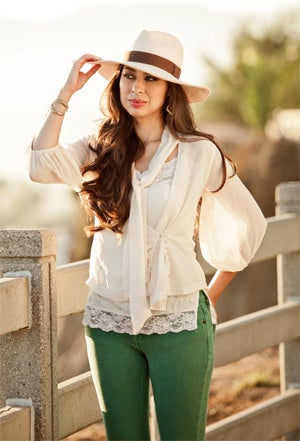 Consumers keen on ethically minded shopping choices may want to skip out on the mall this holiday season in favor of a visit to FashioningChange.com. The San Diego and Santa Monica, Calif.-based recommendation engine and shopping site directs shoppers to "stylish, eco-friendly and ethical" alternatives for men's and women's apparel, accessories and shoes. So, instead of jewelry from Banana Republic, the site suggests accessories from Austin, Texas-based fair-trade indie brand Raven + Lily that were handmade by a group of HIV-positive women in Ethiopia.

Founder and CEO Adriana Herrera, who launched Fashioning Change in November 2011, is banking on the belief that, when given options with the same look and price point as major brands, consumers will have no reason to shop elsewhere. The company has partnered with more than 84 emerging brands offering more than 22,000 products--up from 4,600 in January.

Everything on the site looks like it could be sold at a mall but is designed independently and ethically; many brand partners have a "corporate social involvement" component, such as Madrid's Ananda Pascual, which employs people disenfranchised by India's caste system.

Brands submit new applications daily, but Herrera won't budge on the selection requirements--even if it means taking some heat. For example, despite requests for more plus-size clothing options, she says she would prefer to convince existing Fashioning Change brands to create a new line than accept products that don't meet the standards.

Herrera says her ethically minded stance was influenced by her father, who had family and friends in the manufacturing industry and taught her the importance of supporting low-pollution factories that were considerate of their surrounding communities. "Buying something is more than just an exchange of money," she says. "It can be a vote."

Herrera started out in business on the design side, with an eco-friendly handbag company in 2009. Her new direction came from seeing many designer friends struggling to make money. "I knew there had to be a way to connect designers and customers through styles, brands and prices they liked," she says.

With that as her goal, Herrera was accepted into the Founders Institute incubator--the only woman in her 2010 class. She taught herself to code; found a CTO, Kevin Ball; and started building out Fashioning Change's proprietary "Wear This, Not That" platform in October 2010. Now the company has four full-time employees and recently closed on a seed round that allowed Herrera to expand staff and inventory and launch a mobile app.

While positive social change is at the heart of her venture, Herrera asserts that a truly sustainable business is a profitable one, and her ultimate goal is to scale and compete against big fashion brands and e-commerce giants like Zappos. Demand shouldn't be a problem.

"We want to redirect the flow of consumption to our brands and make them household names," she says. "We believe people want to do good, and given the opportunity, they will. That's why we've done all the homework."