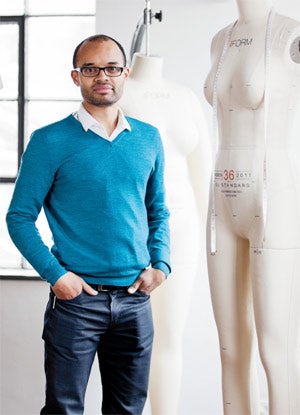 Apparel is one of the fastest-growing online retail segments in the U.S. Last year, thanks to better merchandise visuals and free shipping on returns, sales were up 15.4 percent to $224.2 billion, according to a report by eMarketer. Despite the positive news, high return rates--which occur in large part because consumers order multiple sizes of each item, then return the ones that don't fit--are costly for retailers. Metail, a London-based technology company, may have the answer to this dilemma.

Shoppers can upload a photo of themselves and information about their body size--height, weight and hip, chest and waist measurements--and the service creates a 3-D avatar that is 94 to 96 percent accurate, according to Metail's research. On the retail side, the company digitizes clothing collections by photographing items on a mannequin at various angles. The software then merges the garment images with the customer's avatar. So, if someone chooses a pair of pants, they can see where the rise and hem fall, whether the waistband lies properly and even how the fabric drapes on the body. They can add a jacket and check out the length and fit in the shoulders. They can even select alternative hairstyles to see which looks complement the outfit.

Founder Tom Adeyoola came up with the idea a few years ago while on vacation from his job as head of gaming product development at a U.K. company. In Vietnam with his girlfriend, he watched her indulge in the country's inexpensive custom-tailored clothes, because she was often frustrated by the poor fit of off-the-rack garments back home. Adeyoola wondered: What if one could facilitate the traditional buying process by "trying on" clothing virtually? Roberto Cipolla, a professor of information engineering at Cambridge University, recommended a former student to help Adeyoola build out his idea.

Metail launched last year with its first client, U.K. retail giant Tesco. In October, fashion-forward retailer Warehouse added the technology to its website. This year Adeyoola hopes to secure customers in the U.S., but says he's going after only the top 20 e-tailers. Since Metail doesn't charge for its service--it takes an undisclosed cut of any orders that are placed--its model depends on volume to work.

And does it work? Fiona Harrison, Warehouse's head of e-commerce, says it's too early to tell, but she believes Metail will be an important part of her company's push to reduce returns by more than 3 percent in 2013. Plus, she says, "we're hearing feedback from customers who are saying, 'I love this' and 'This is really exciting.' It's been really positive."