What Makes a Great Hotel Bar

Let's meet at the bar in your hotel," my former colleague Lloyd suggested when it became clear that our intersection in Toronto would be limited to a late-night drink.

My one night in Toronto spent in a hotel bar? It sounded grim. Hotel bars have always been ideal for gathering a group together before you head off to dinner somewhere else, or for sipping a glass of wine while waiting for your spouse to finish dressing. As the sole venue for an evening's entertainment, though, most are sorely lacking.

It's one thing if you're in London and stop in for a drink at The Lanesborough or the Connaught; that drink doubles as a visit to a cultural artifact. In New York, I've made a pilgrimage to The Algonquin to commune with the spirits of Dorothy Parker and Robert Benchley.

But in most places, a visit to a hotel bar usually means unreasonably expensive cocktails made from gloppy mixes, wine I wouldn't drink even on an airplane and acoustic renditions of '70s hits sung by a street busker someone evidently invited in out of the rain.

Even at their best, hotel bars have tended to be faceless, placeless and generic, filled with itinerants (like me) passing through from somewhere else. I've always ranked hanging out in one just a half-step higher than drinking at the airport.

My thoughts on the topic took a turn that night at The Bar at Toronto's Shangri-La hotel. The seats at the tables were sleek and low, like in a sports car. They were so comfortable that I had to force myself to stand up to greet Lloyd when he walked in.

The cocktail menu, which was one of a set of linen-bound books my server delivered to the table with a flourish, replicated what were billed as classic drinks from the 1930s, like the Gin Basil Smash and the Pink Lady. I settled on a Ti-Punch: Havana Club Añejo rum, fresh lime juice, simple syrup. It cost $18 (more than I wanted to pay), but it couldn't have been more delicious.

Even more impressive, the wine selection included by-the-glass options from Charles Melton, Lailey Vineyard and Niagara River, among others. The music in the adjacent room was jazz-inflected pop by a group called the Sara Dell Trio, whose lead singer had a hauntingly smoky voice that I couldn't get out of my head for days.

With all that, I guess I shouldn't have been surprised to learn that the crowd seemed anything but transient. The servers knew customers by their first names. The three men at the table beside me had just attended the Maple Leafs-Islanders game at the nearby Air Canada Centre and were having a heated discussion about the local team. "It's a winter Thursday night in Toronto," Lloyd said over Sara Dell's crooning. "This is where people go."

Richard Cooke, the Shangri-La's general manager, explains, "The bar has become a place where a hotel seeks to entertain the community. Banquets and catering can get you a couple of pieces of business a month, but that's about it. So the bar is the main intersection point between a hotel and the place where it's located. We work hard at making ours somewhere that people want to visit--and then return to again and again."

In the weeks that followed, I made a point of stopping in to the bar at every hotel at which I stayed. Some were just as dull and faceless as I'd remembered. But a surprising number had something singular and even site-specific to offer. At each of the good ones I had the sense that there were more locals around me than hotel guests. That felt good, like the bar was a place I'd have actively sought out even if I'd been staying somewhere else.

I don't get to Toronto often, so I can't become a regular at the Shangri-La. But Lloyd can. And the next time I'm in town, I'll see him there.

Worth the trip: Four that get it right 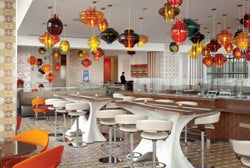 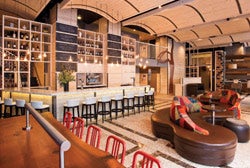 The Gastro Bar at 35th

Tryp by Wyndham, New York City
The bar in Tryp's new Manhattan outpost below Times Square isn't just in the lobby, it pretty much is the lobby. Tryp is a Spanish chain, and the Gastro Bar has the feel of an Andalusian bodega, minus the dangling hams. Nearly two dozen tapas are offered daily; with a selection of five comes a free bottle of wine. 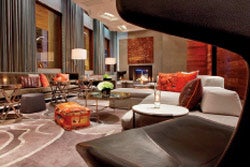 W Austin
This is a lobby bar spread over four rooms, each with a distinctly different feel. In a nod to the city's musical heritage, stacks of classic vinyl records are playable by guests. The drinks, too, have Austin ties--local favorite Tito's Handmade Vodka is a staple--and bartenders have just the proper dose of slacker-meets-hipster attitude. 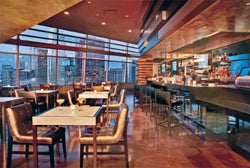 Ritz-Carlton, Los Angeles
Overlooking downtown, the lounge at Wolfgang Puck's WP24 restaurant serves as a clubhouse for the sports and entertainment acts playing the Staples Center 24 stories below. Puck's brother Klaus is the hotel's food and beverage director, so the wine list is dotted with Austrian picks--18 whites and five reds at last count. Cocktails feature herbs from the hotel's rooftop garden.
loading...
More from Entrepreneur