How Homeboy Industries Landed a Distribution Deal With Supermarkets

Talk about a fortuitous lunch.

A few years ago, Kendra Doyel, vice president of public affairs for Ralphs Grocery Co. and Food 4 Less, toured Homeboy Industries' headquarters and stayed to eat at the Homegirl Cafe.

"We started having the most incredible food," she says. "I said, 'It needs to be in every Ralphs and Food 4 Less.'" Now it is.

As an initial test, Ralphs sold Homeboy's chips and salsa in the deli section of one store. "We were selling out of it by 11 a.m. or 12 every day. They couldn't keep up with the demand," Doyel says.

That one store expanded to 233 California outlets of Ralphs and Food 4 Less. Since January 2011, Homeboy products have generated grocery-store sales of more than $4.3 million. But more than the money, the placement drives awareness of Homeboy's mission.

"Quickly after we got it in into our stores, the chips became the No. 1 snack item in the deli section," Doyel says. "It overtook hummus and pita chips and has stayed at the top of that list ever since." The chips retail for $3.29; the salsa for $3.99.

Going from one store to more than 230 took planning and education. For the salsa served at the Homegirl Cafe, chef Pati Zarate grabbed herbs grown behind Homeboy's headquarters. That wasn't sustainable for mass production. 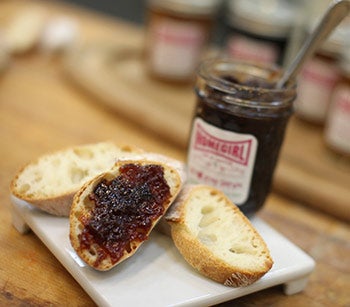 Ralphs paired Zarate with a manufacturer that took her complicated salsa recipe and simplified it for mass production, as well as a manufacturer for the chips. Next came packaging (each bag carries the Homeboy logo and the "Jobs Not Jails" slogan), marketing and distribution. Ralphs donated $50,000 to Homeboy to help get the pipeline going, and made another $50,000 donation this fall.

Homeboy now pays two vendors to make the chips and six types of salsa and then sell the goods to Ralphs. This summer, Ralphs added Homeboy macaroni, red potato and jalapeño potato salad to its deli sections.

Homeboy CEO Tom Vozzo, who has high praise for Ralphs, declined to reveal how much Homeboy has netted from the deal, other than to say that it is profitable. "Ralphs has been a good partner from day one," he says. "Honestly, they were willing to bring us in and accept a lower margin on their side than what they would expect … because they knew we were a nonprofit and they were helping us out. They got the message of it."

Now Vozzo hopes to expand Homeboy's grocery business with Ralphs and other retailers. One idea is to bottle the specialty flavored drinks that are served at the Homegirl Cafe for grocery-store distribution.

Vozzo looks to Newman's Own, the charitable food line developed by Paul Newman, as a shining example of doing good by tasting good. "It's a tremendous success story," Vozzo says. "They've made a product that's compelling, and people buy for the flavor and not just for the charity."

Lessons About Marketing Complacency I Had to Learn the Hard Way