How Levi's Became a Brand With Staying Power

In our consumer culture of shiny-new-object syndrome, it is increasingly unlikely that a brand will survive—much less thrive—for more than a few seasons. But for 162 years, Levi Strauss & Co. has done just that. The staying power of the Levi’s brand stands out boldly in this era of pop-up stores, Snapchat-style startups and fleeting loyalty.

For perspective, consider that when Levi Strauss emigrated in 1853 from Buttenheim, Bavaria, to the U.S. and founded his company, there were only 31 American states. Another 32 years would pass before the automobile was developed. Among iconic U.S. brands, only Anheuser-Busch (founded in 1852) has been around longer than Levi’s. (Coca-Cola came about in 1892; Ford in 1903.)

And yet Levi’s remains a formidable brand today. Fiscal 2014 revenue increased 2 percent over the previous year to $4.68 billion, and the company commands the highest share of the global jeans market. Retailers credit Levi’s for having unique brand assets they can’t get from other lines. As Gary Oneil, former creative director for J.C. Penney, explains, “Levi’s has become a brand titan that scales across lifestyle, gender … this allows retailers to cast a broad net that captures a diverse customer base.”

Moreover, Levi’s continues to be considered hip. Complex, a website devoted to twentysomething males, listed Levi’s among its “15 Brands Hipsters Love,” alongside Band of Outsiders and other indie designers. Sightings of Levi’s-clad celebrities fill the pages of style and pop-culture media.

Shawn Parr, head of San Diego-based brand and innovation consultancy Bulldog Drummond, whose clients include adidas, American Eagle Outfitters and Nike, observes, “Levi’s is like the Rolling Stones or Johnny Cash. They’re one of the all-time greats who defy and define the category, and without them, the genre wouldn’t be the same.”

The secret to the longevity of Levi’s actually isn’t a secret at all. The company uses classic brand-building principles to maintain and grow its brand equity. These are fundamental ideals that remain the keys to building a brand with staying power.

Above all else, Levi’s is authentic—and fiercely committed to maintaining and reinforcing that authenticity.

The company got its start by selling built-to-last pants to miners during the California gold rush. Demand spread across the nation, and as pioneering gave way to manufacturing in the economic landscape of the early 1900s, Levi’s became the clothing of choice for the working class.

During the midcentury deindustrialization period, the company’s denim became popular among rebellious youth subcultures. Its proposition as a genuine, original brand resonated with greasers and hippies alike. 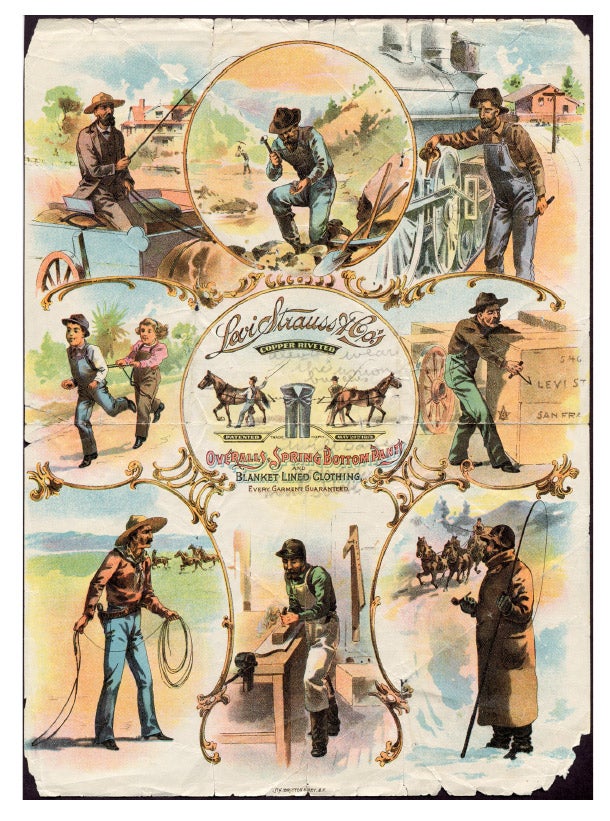 In the mid-1980s, Levi’s launched a campaign promoting its classic 501s, which rekindled excitement and demand for the five-pocket jean originally introduced more than 100 years earlier. The company returned to the effort again in the late 2000s.

“People love the original 501 because it is timeless,” comments Levi’s CMO Jennifer Sey. “As a brand that’s been around for  more than 160 years, we have clothed a lot of people and been a part of many great, pivotal storytelling moments.”

These days, authenticity is one of the most common business buzzwords and desired brand traits—and with good reason. The Authentic Brand Index (ABI) has shown that the stronger a brand’s perceived authenticity, the more likely people are to become advocates for it. Authenticity, ABI’s analysts observe, helps fuel success in today’s markets as consumers search for greater meaning and sincerity from the brands they choose. People desire to connect with products that feel safe and certain. Levi’s clearly identifies its core purpose, attributes and value—and then uses them as a compass for everything it does. This resonates particularly with today’s influential young consumers.

“Brands that create purpose win Millennials’ hearts, and brands that are different and authentic win their minds,” says Jeff Fromm, co-author of Marketing to Millennials.

Go for an emotional response.

The quality and integrity of Levi’s products is unquestionable. The rivets on the jeans have become a standard around the world, and the signature red-stitched selvage and double-needle stitching are superior design details. But the company’s brand messages have made a more culturally significant appeal.

Starting in the 1950s with print ads featuring celebrity bad boys like Marlon Brando, and continuing into the late ’60s with counterculture radio spots set to psychedelic music from Jefferson Airplane, Levi’s sought to make a powerful emotional connection with its audience. In the ’70s and ’80s, Levi’s turned to TV, capturing consumer attention with vignettes that were risqué at the time, including a commercial starring model Nick Kamen stripping down to his boxers in a laundromat. The spots inspired a visceral response. 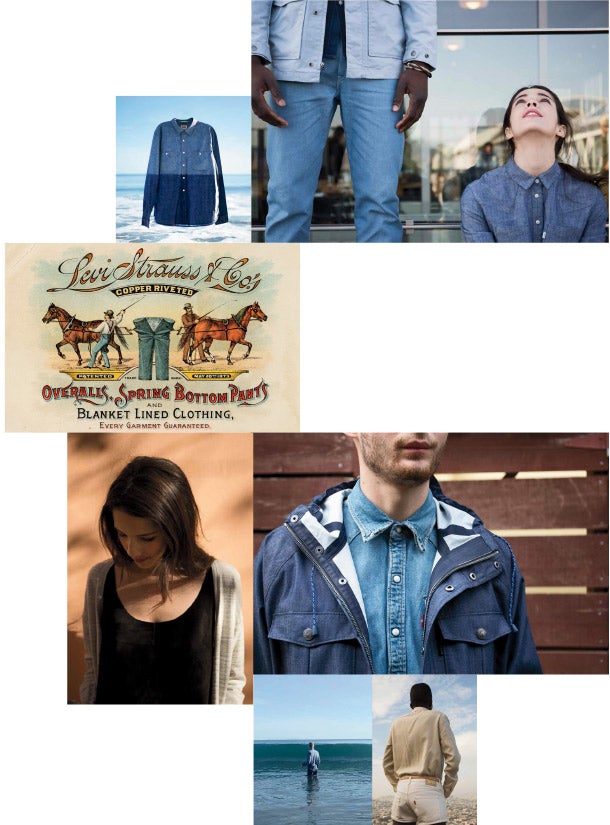 More recently, in 2009 Levi’s stirred viewers with an expertly crafted and beautifully shot campaign titled “Go Forth.” The series of mini-films sets black-and-white images of a Hurricane Katrina-ravaged New Orleans against a soundtrack of Walt Whitman poetry. By celebrating the “brand for pioneers who are in the process of building a new America,” Levi’s once again managed to capture and convey a unique spirit.

In each of these campaigns, Levi’s stoked passion for its brand without describing its wares or promoting product features. In fact, it could be said that Levi’s advertising has systematically avoided selling its products—aiming instead for an emotional connection with consumers.

“We’ve been there with people for many of their great and defining life experiences—big and small,” Sey explains. “From first dates to the first day of school … our job as marketers is to facilitate and amplify that great storytelling to drive deep engagement.”

All brands need to evolve to remain relevant. Levi’s, despite the powerful brand equity it has established, is no exception. But the company favors maintaining its brand integrity over jumping onto the latest trends.

“What has kept Levi’s in the forefront of the ever-changing jean world is their market research— how they test product with a variety of diverse retailers and use that feedback to address various fits, washes and fashion elements to stay current,” says Billy Rudnick, general merchandising manager for New York retailer Dr. Jays. “But they never go too far into the gimmicks that have misled many good companies.”

At times, this stance caused the company to fall behind. In the early 2000s, for example, the design team was late to move into popular new fashion directions like colored denim for women and tailored jeans for men. As a result, sales plummeted.

But in many other instances, Levi’s was ahead of its time, especially in areas of social responsibility. Way back in the 1890s, Levi Strauss established scholarships for students at the University of California, Berkeley, and ever since, the company has pursued a mission that executives call “profits through principles.”

Strauss’ great-great-grand-nephew Robert Haas, CEO from 1984 to 1999, launched a manufacturing code of conduct for overseas suppliers. He was also the first Fortune 500 CEO to extend medical benefits to employees’ domestic partners and one of the earliest corporate executives to champion funding for HIV/AIDS research. 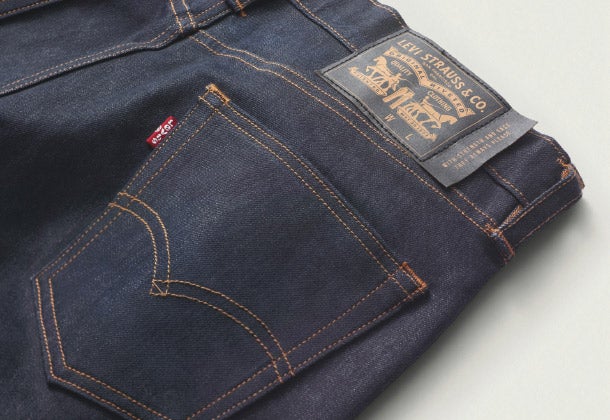 Adds Sey: “We invented the blue jean, provided the first-ever women’s jean, and continue to innovate today based on consumer need with greener products, including the Water

While most companies search for ways to modernize, innovations at Levi’s often invoke the brand’s history. For example, the latest version of its visual identity features an updated logo based on the original batwing designed for the company nearly 50 years ago by Walter Landor. Other elements of the “new” identity include the shape of the stitching that has been on the back pockets for more than a century, a modernized rendition of the two-horse mark and the message “Patented 1873.”

Marketing strategies also tie strongly to the brand’s history and values. In 2013 Levi’s held a series of concerts along the oldest U.S. railway route, with stops in small towns. Social media marketing communications, meanwhile, serve to educate consumers about issues such as water conservation, or to support social justice leaders, as much as to promote products.

Levi’s recognizes that trend-following may be the simplest way to attract attention and raise short-term revenue, but following someone else’s lead usually causes a company to stray from its own brand identity. At times in Levi’s history, its managers learned this lesson the hard way. Branding consultant Parr says Levi’s has “always got to watch that they’re not trying too hard or to be something they’re not. They’ve been at their best when they are comfortable being Levi’s, leaning on the past, but being risk-takers.”

A look at Levi’s offers insight into the commitment, courage and consistency that goes into making a great brand. One of the nation’s longest-standing companies, it thrives on its identity as an original American brand in an increasingly global marketplace. It represents individuality and rebelliousness while appealing broadly, and it offers accessibility in an industry that thrives on exclusivity.

The cultural resonance of Levi’s has withstood the ups and downs of the economy, fashion trends and the business itself. Even more than its products, the Levi’s brand was built to last.

How Two Designers Created A Weed Brand With Whimsy

Tapping Into the DNA of the Playboy Brand

These Are The Best-Selling Pot Brands In The Country