Entrepreneurs: Twentysomethings Gabi Lewis and Greg Sewitz met while attending Brown University, where they were roommates. After graduation, Lewis turned down a job with a hedge fund and Sewitz deferred grad school so they could launch New York-based Exo, a company that manufactures cricket-based protein bars.

“Aha” moment: Sewitz, who studied cognitive neuroscience and English at Brown, attended a conference at the Massachusetts Institute of Technology, where he learned about insects as a sustainable food source. (The Food and Agriculture Organization of the United Nations, among others, have pointed to insects as an inexpensive source of protein, calcium and iron that emits fewer greenhouse gases during production than livestock.) Sewitz suggested that Lewis, who was making homemade protein bars as an alternative to sugary mass-market versions, consider adding crickets to his DIY recipe.

Bugging out: The duo ordered a box of live crickets to their campus apartment and started experimenting. After drying the insects in the oven, they ground them into a fine powder. To their surprise, the inaugural recipe for cacao nut protein bars tasted great. But they knew that to make their product marketable, they’d have to overcome the ick factor associated with eating insects.

“We knew we needed to knock it out of the park with taste because we have the extra hurdle of perception to overcome,” Sewitz explains.

Chirping in: To test their concept, the pair distributed the bars at farmers markets and CrossFit gyms. They called the protein “cricket flour” (a term now ubiquitous in the growing insect food industry). The bars were a hit. 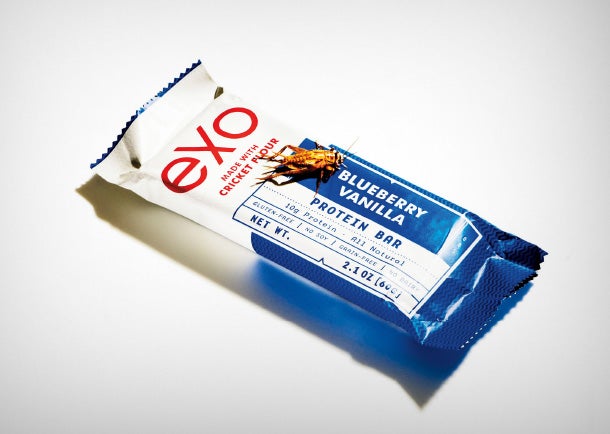 After a few months of selling handmade bars packaged in sandwich bags, Sewitz and Lewis made their business official. They launched a Kickstarter campaign to fund their first manufacturing run and reached their $20,000 goal in less than 72 hours; the 30-day campaign raised a total of $54,911. Exo launched in 2014.

Buzz kill: The entrepreneurs quickly discovered that it takes more than just consumer demand for a business to take flight. The first challenge: finding an organic cricket farm willing to raise crickets in separate facilities than those used for animal feed. After overcoming that hurdle, they still had to find a manufacturer willing to produce the cricket-based protein bars.

“There is a very slight overlap in allergens between crickets and shellfish,” Lewis explains. “It wasn’t just that we were asking manufacturers to take a chance on two recent college grads with a crazy idea and not much backing; we were also asking them to introduce a new allergen to their operations.”

With a domestic manufacturer secured, Exo ordered 50,000 bars in March 2014. Within weeks, the bars sold out on exoprotein.com, buoyed by buzz from the Kickstarter campaign. The partners then placed a second order for 100,000.

Although other startups make insect-based protein bars, many, according to Lewis, are still in conceptual stages or limited to regional sales. Exo is sold in several national retail outlets, including some Whole Foods locations.

“At any given store, there are 50 to 100 protein bars on the shelf, and they all look the same; it’s a very saturated market and very hard to stand out,” Lewis acknowledges. “We want to connect directly to consumers.”

The approach is working. Lewis declined to provide sales figures but says the startup, which raised $1.2 million in venture capital in September and has grown to include six full-time staffers, has sold “a few hundred thousand” bars and achieved 10 percent month-over-month growth. Seventy-five percent of sales are direct to consumers via exoprotein.com.

What’s next: In addition to spreading their “passionate evangelism” for insect proteins, Lewis and Sewitz are experimenting with new products made from cricket flour, including baked goods, shakes and pizza dough.