News came out recently that Facebook remains the most popular social network among American teens. Wait … WHAT? I thought teens hated Facebook. Time, The Washington Post and others (even Entrepreneur) have reported that teens are shedding Facebook like a winter coat in springtime.

Not so fast. The fact is that teens continue to use Facebook, although they do seem to be diversifying their activity among additional social media platforms.

This spring a survey by the Pew Research Center, a Washington, D.C., “fact tank,” found that 71 percent of teens use Facebook, making it the most popular social networking platform among 13- to  17-year-olds. Instagram is the second most popular (used by 52 percent), followed by Snapchat, Twitter and Google+.

If you market or sell to teens, it’s a no-brainer that this news matters: You need to understand where members of that age group hang out online and how they behave there, so you can direct your efforts accordingly. But even if you don’t market to teens specifically, understanding their behavior offers insights into broader trends. Today’s teens are tomorrow’s adults—important to remember if you want your company to remain viable for the long term.

So what’s going on? Is Facebook dead or not? And what do these seemingly contradictory reports say about its long-term viability as a marketing platform for you? My hunch is that teens haven’t abandoned Facebook—and probably won’t anytime soon. But they are using the site in ways that are unique to their age group.

Here are my unsubstantiated and unscientific but nonetheless firsthand experiences and observations of the teens I know, along with my insights based on studying social media marketing almost since its inception.

Kids use Facebook differently than adults. Most teens don’t use Facebook widely as a social networking platform. Instead, they see it as a news-curation feed, and they post less frequently than adults, using it only to broadcast announcements to friends (where they are working this summer) or to show support for things they care about (such as political candidates).

Teens update their profile pages infrequently. Teens tend to lurk way more than they post. This could give the impression that they are wandering away from Facebook, when in reality they’ve just gone “underground.” (See next point.)

Teens post less publicly but are more active privately. Teens actively use Facebook Chat and Groups to announce to classmates where they are going to college, connect with people they’ll room with at camp, plan parties or events or make sure no one else has the same prom dress. The bottom line is this: For adults, private groups augment the Facebook experience; for teens, private groups are at the center of how they use the platform.

For better or worse, it's the social web of their lives. Today’s teens are the first generation of true digital natives. They couldn’t wait to get on Facebook in middle school because it was cool. But now they pretty much consider it a burden, or view it with ambivalence—or, as my teenage daughter, Caroline, just told me, “Eh, it’s aight.”

Some see it as a place they’d like to leave … if only all their friends weren’t there. And really, what’s the alternative? (Which sounds a lot like high school itself, now that I think of it.)

So where does that leave us, from a marketing point of view?

There are public, searchable groups that anyone can join and access. However, there are two types of private groups on Facebook: “closed,” a searchable group that anyone can ask to join, but only members can read and add posts; and “secret,” a group that is not searchable to the public, and only members can read and add posts. Trainers, educators or consultants might consider using secret groups as a way to engage a small, select set of customers or prospects.

Where are teens hanging out these days? 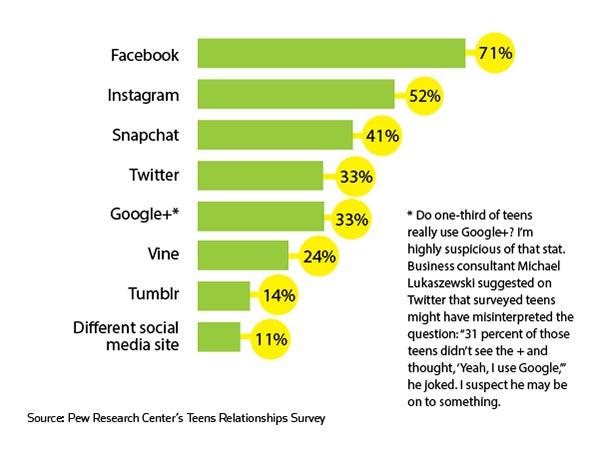 Lessons About Marketing Complacency I Had to Learn the Hard Way