This Entrepreneur Created a Hangover Cure on Wheels

Entrepreneur: Jason Burke worked as an anesthesiologist in Las Vegas for seven years before he decided to launch a company that would help people with hangovers get back on their feet.

“Aha” moment: While on duty in the recovery room, Burke—who still practices medicine a couple of days per week—realized that the same meds used to help post-op patients suffering from nausea, headache or dizziness could be a boon to the city’s party people.

Tying one on: In 2011 Burke attempted to launch a business administering IV meds for hangovers from a location across from the Hard Rock Hotel & Casino. The financial realities of real estate on the Strip put an end to that. However, while driving around the city, he hit upon the idea of offering his services on the go, via bus. Hangover sufferers would get a remedy faster, he theorized, and he’d minimize his overhead. Nevada officials saw no problem with the plan, and in 2012 Burke launched Hangover Heaven in a 45-foot bus.

Dr. Feelgood: The common misconception about hangovers, Burke explains, is that they’re all about dehydration. “That’s completely false,” he says. “The major issues are oxidative stress and inflammation. The problem as you get older is that your recovery time slows down.”

Hangover Heaven delivers its mix of medications, electrolytes and vitamins via pediatric IVs—“the same size as used on 4-year-olds,” Burke says, “and we hire people who are really skilled.”

Because even a bag of saline is a prescription item, every Hangover Heaven client sees either Burke or one of the staff’s physician’s assistants or nurse practitioners. The team also includes registered nurses and assistants. 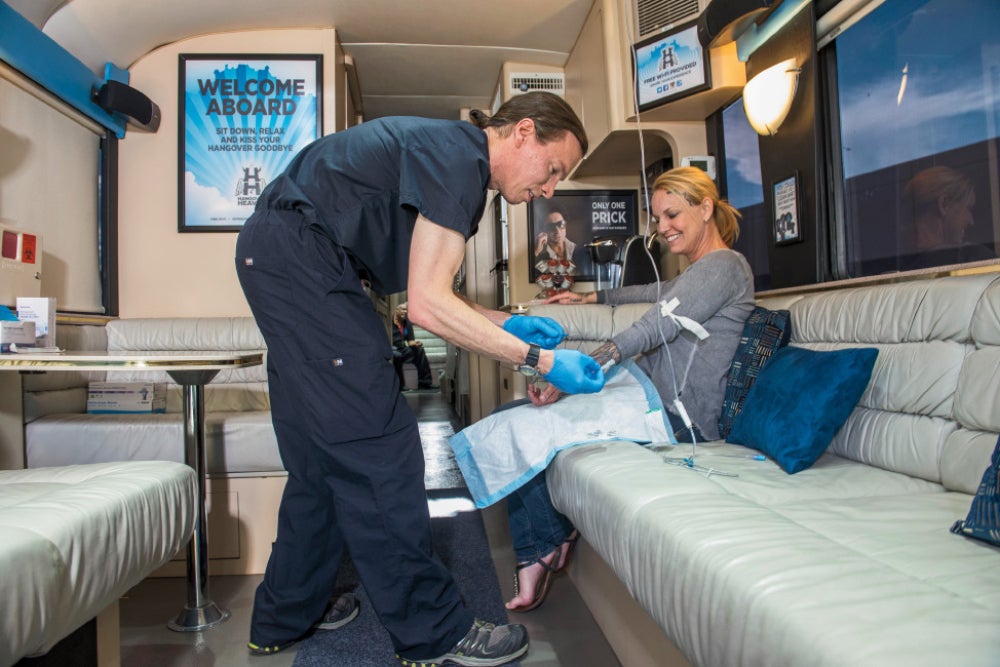 Mobile miracles: The bus was retrofitted to serve up to 14 people at a time. In addition, Burke eventually opened a brick-and-mortar location off the Strip. He points out that receiving treatment on a moving vehicle can be problematic for women, whose hangovers tend to include nausea. (He says men are more prone to headaches.) The company also treats clients in hotel rooms and operates a fully equipped ambulance service that is sometimes used to bring post-partiers to the storefront. “People think it’s fun,” Burke says.

What price relief? Hangover Heaven’s Redemption 3.0 treatment, which includes a choice of nausea or headache medicines, costs $159. The Rapture Package—which includes meds for nausea, headache and heartburn; 30 minutes of oxygen; and a shot of B vitamins—goes for $259. Burke admits it’s pricey but points out, “To spend $200 to fix a hangover to get a day of their vacation back—it’s a pretty easy equation for most people to make.”

Hair of the dog: Burke won’t disclose revenue details but says the company is set to hit the “double-digit millions” in the next two years. Full-service locations overseas are in the works.

But Burke expects his biggest growth to come from an over-the-counter vitamin and antioxidant blend he has developed “based on treating more than 20,000 hangovers.” He is selling the capsules at hangoverheaven.com under the name Hangover Heaven Nightlife Prep Supplement and is seeking international distribution deals.