What This Casket Maker Learned from Honda, Tesla and Steve Jobs

This story appears in the July 2016 issue of Entrepreneur. Subscribe »

When Joseph Ledinh’s grandfather passed away, in 1998, he and his father went casket shopping. “Every funeral home in New Jersey had the same product,” he says. “Hillenbrand, Matthews International and Aurora controlled the market. It was frustrating, but there was nothing we could do -- we had to buy that day.”

Ledinh figured there was a business in making modern caskets, but the timing was wrong: He was focused on becoming an automotive designer. He soon got a job at Honda, which was less glamorous than he expected. “In the beginning, you think you’re going to be designing the coolest car, but I got put on the Honda Accord,” he says with a laugh. “Working on that project, however, I understood it’s their bread and butter. You can’t design a product so outrageous that only five people buy it. You need 5,000 -- or 500,000.”

After 10 years, he arrived at Peugeot and got to make the cool stuff -- the “cars of the future,” those conceptual designs that draw crowds at trade shows. It was, he felt, the pinnacle of his career. “After that, I thought, Where next?” he says. Then he remembered the caskets. He googled the phrase “modern casket,” and nothing came up. Bingo.

This wasn’t Ledinh’s first crack at the risk-averse funerary industry. Back in the early 1990s, as a graduate student at the ArtCenter College of Design in Pasadena, Calif., he had pitched his thesis on tombstones. (He’d envisioned an embedded, solar-powered screen that played a memorial video). Now he imagined sleek, beautiful caskets -- a vision that didn’t impress his friends and family. 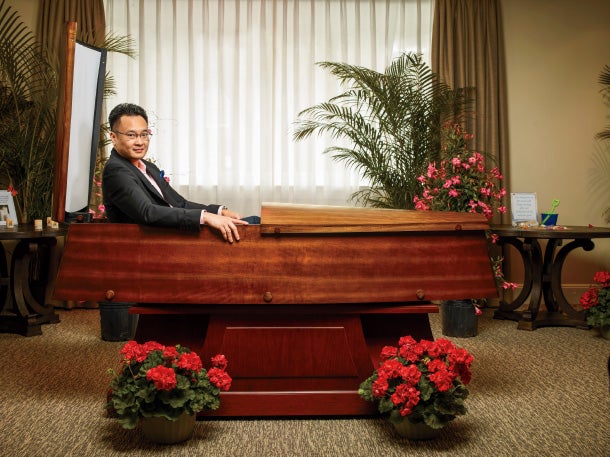 “It’s as if I took the most undesirable career choice in existence,” he says. The Ledinhs immigrated to the United States in 1980 as refugees of the Vietnam War. “My parents were in shock when I told them. Even yesterday, my mom said, ‘Isn’t there a better profession you could choose than this?’” But he found a cheerleader in his wife, fashion designer Emma Lee, who encouraged him to work nights and weekends on his caskets while he was still at Peugeot. When he was ready to launch, she took over as the sole breadwinner.

Ledinh chose the name Able Caskets because trade shows list companies alphabetically -- a trick he learned from Steve Jobs. He wanted to manufacture with a furniture company, but “as soon as I said I was working on caskets, they wouldn’t return my calls,” he says. Eventually he found a Los Angeles company that makes pool tables and other gaming tables; their market had shrunk with the recession, and they were looking for new revenue streams.

He then spent two years on prototypes and preproduction runs. He created a coffin with streamlined curves, an echo from his car-designing days. He chose plywood over hardwood for its relative malleability and quicker burn time (for eco-friendlier cremations). He made the lid open from the top like a canopy, instead of from the side—“like how Tesla had an SUV with a falcon door,” he muses. And manufacturing domestically had its perks: it allowed him to tweak the design
as issues arose.

Able Caskets debuted in 2013. He thought about how the auto industry would market his product; there’d be no uninspired words like memorial and remembrance. So he created the slogan “Love, beauty, soul.” Where competitors’ catalogs showed caskets silhouetted against white backdrops, he set his against memory-triggering travel photographs. His cherrywood-finish coffin, for instance, foregrounds a nighttime shot of the Louvre. “The marketing is not geared to the deceased,” says Ledinh. “We sell to the living—to the families.”

Year one was painfully slow for Ledinh’s casket startup. He barely eked by in year two. But now, after three years of travel, networking and trade shows, he’s breaking through. Orders are strong in Europe, and he’s making inroads in Japan. A Hollywood prop company just placed an order.

Ledinh likes bucking the industry, but he’s learned its limits: Yes, he could sell directly to consumers, but it’s not worth upsetting the middlemen—funeral directors—who control the bulk of the market. And anyway, he’s found a shared spirit in them—a younger, savvier generation now taking over their family businesses. “They’re hungry for newer product,” he says. “Caskets haven’t changed in 112 years. They say, ‘It’s about time!’”