The Heat Is On: How Drybar Continues to Blow Past Its Competition

When Alli Webb launched Drybar in 2010, she invented a new industry -- and now the competition is heating up.
Next Article Add to Queue

This story appears in the October 2017 issue of Entrepreneur. Subscribe »

In 2008, after five years as a stay-at-home mom, hairstylist Alli Webb was ready for some grown-up time. She started traveling from home to home in Los Angeles, providing affordable blowouts (that’s a wash, a dry and a style, gentlemen) to other moms who, like her, were eager for a small break from nonstop responsibilities. Nearly a decade later, Webb’s brainchild has grown into Drybar, a blowouts-only salon chain beloved by women across the country. The bar-themed business -- styles offered include the Cosmo (loose curls) and the Mai Tai (beachy waves) -- is chic and girly, and serves up as many mimosas as hairstyles in a given day. As the business prepares to open its 100th location and eyes international expansion, Webb is the first to admit that she and her co-founders -- who are also her husband and her brother -- are still learning as they go.

Related: 9 Ways to Profit From Your Passion

Drybar is approaching 100 locations after just seven years in business. How do you keep the service consistent at scale?

It’s one of the biggest challenges we face. We’ve learned how to make good stylists great through our training programs and audition processes, but it is tough, especially in some smaller cities. New York and L.A. are ripe with stylists with a lot of experience, but we definitely have challenges in smaller cities. And we don’t run an actual school -- not yet, anyway -- but we’ve got a robust training program to teach our signature tricks and styles. The best compliment I can get is from a woman who travels a lot and can depend on Drybar in any city.

The company has really made blowouts ubiquitous and inspired quite a few copycat businesses along the way.

It’s funny because when we first opened, customers would come in and I would tell them literally everything about the business, because I was so proud. And then we started seeing similar models open up.

Yes! One woman came in, asked me a bunch of questions and then opened her own store. She even wrote me a letter almost apologizing, saying I was so generous with my time and she was feeling guilty. But we always knew that if this took off, there would be competition. We didn’t know people would take actual verbiage from our website and put it on theirs, which has happened, but we knew there would be competition. But you can’t really duplicate what we do just by hiring some stylists and making a space look cute. We’ve got a secret sauce.

The Drybar experience really is unique, from the chick flicks that play on a loop in the salons to the actual cocktail-themed hairstyles. Do you ever worry about it feeling gimmicky?

Oh, I worry about that. I’ve always worried about that. When we were starting out, my brother thought naming the styles the Manhattan or the Cosmo was cheesy. My gut told me women were going to love it, but moving forward we have tried to maintain a kind of sophisticated whimsy. There are a lot of checks and balances to keep it from feeling silly. If my husband shows me something new for branding, there have been times when I’ve had to say, “I don’t know, babe; it’s a little too far.” When we talk about ideas among us three co-founders, if one of us really doesn’t like it, we don’t do it.

Related: 5 Rules of Branding That Will Make You A Sought-After Superstar

Do you feel pressure to expand beyond blowouts?

Everyone asks me that question. From our investors’ perspective, we have this captive audience of 100-plus women a day coming into each shop -- we can probably sell them a lot of things. But it feels like it would take away from the authenticity of the brand. Nobody likes being solicited to, and I don’t want to upsell people. And from our customers’ perspective, a lot of women have asked me, “Can’t you just give me a manicure while I’m sitting here getting my hair done?” And sure. We could. We could offer a lot of services and probably be OK at all of them. But I’d rather be really great at this one thing. We’ll never do anything outside of blowouts. Not in Drybar. Tools and products make sense -- you want to replicate your hairstyle -- but I couldn’t sell you, say, a lipstick in good conscience. 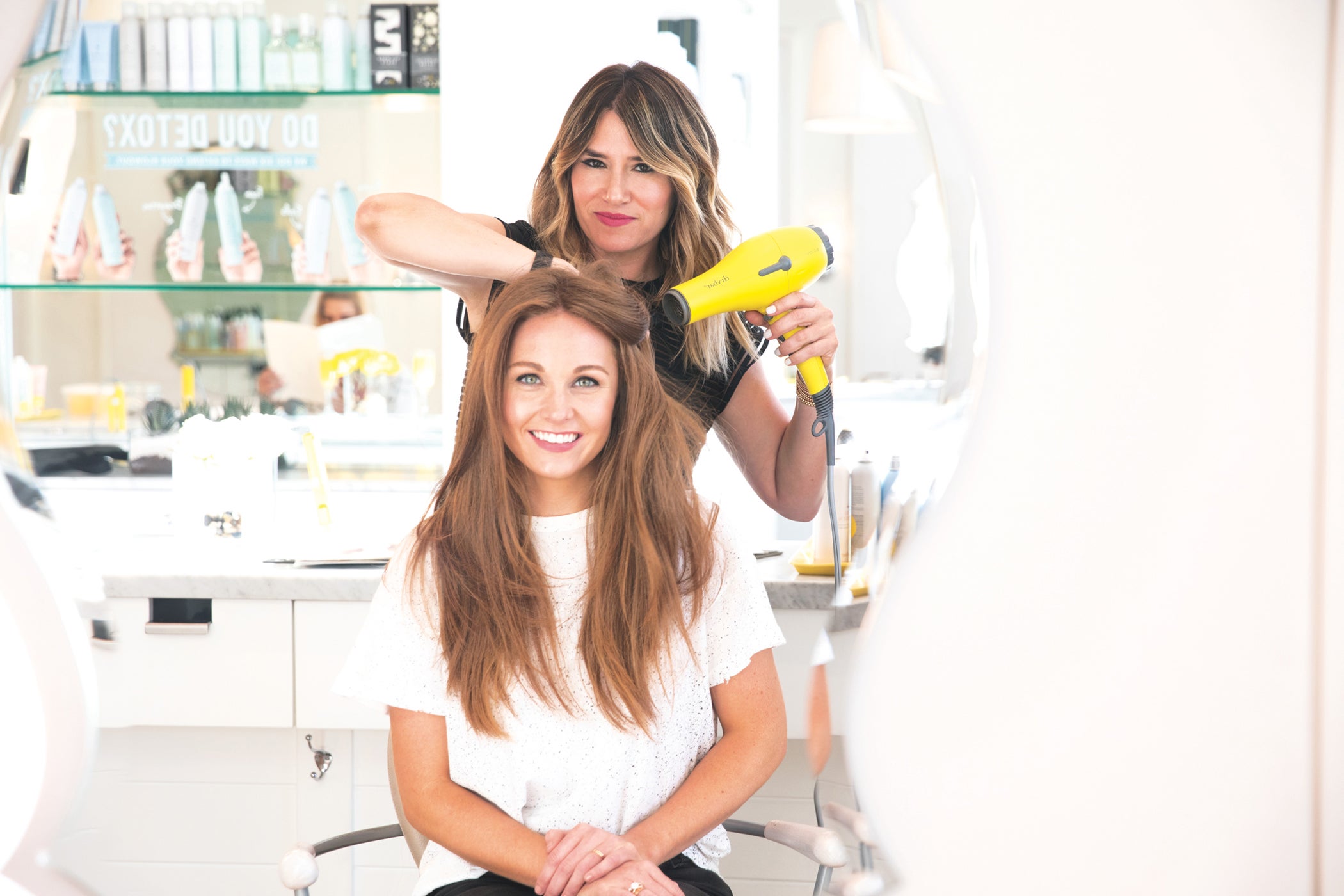 You started selling your own haircare tools and products a few years ago. The growth was rapid, and they’re now sold in your shops as well as Sephora and Ulta. Are those retail outlets helping people discover Drybar?

Absolutely -- and the products account for almost 30 percent of our revenue now. When we started taking off, we were courted by a lot of hair-­product companies that wanted to create a co-branded line with us, but Janet Gurwitch, one of our investors at [private equity firm] Castanea Partners, told me to do it alone. Janet had founded Laura Mercier Cosmetics, and her guidance and expertise became instrumental in product development. She opened a lot of doors for us and introduced me to all the best labs. I always say: Find people who know how to do the shit you don’t. Without Janet, these partners would not have talked to us.

In 2014 you replaced your brother and co-founder, Michael Landau, as CEO and brought in John Heffner, who had served as president at OPI. How tough was that decision?

It wasn’t one I was particularly excited about. Our equity partners at Castanea started that initial conversation with Michael and me, and at first, I was like, “No.” I was kind of a brat about it. I thought it would change the company culture, and I didn’t think a professional CEO would be able to do anything we weren’t already managing.

So what changed your mind?

It wasn’t until we met John -- whose exterior does not match his interior. He walked into our office in a suit, very corporate-looking, and my initial thought was Ugh, no. But after five minutes with him, Michael and I were both pretty much in love. [Landau remains chairman of the board.] Unlike a lot of people we had spoken to, John really wanted to partner with us. He didn’t want to come in and totally shake things up, because we didn’t need that. Castanea’s thinking was, if this thing was going to get huge, we weren’t going to know how to deal with it. And they were right.

What’s different under his leadership?

We were on a rocket ship a little bit, opening stores so fast. And as entrepreneurs, we didn’t have the skill set to scale a business. But John did -- and he immediately put systems in place, hired great people, and let them do their job. He also hit the brakes -- we slowed down on openings and made sure all the trains were running on time in terms of operations. He helped create a calming sense throughout the company. It’s like the adult in the room of this very family-run business.

Related: 8 Questions to Answer Before Selecting a New CEO

It can’t be easy running a company with your husband and brother as co-founders.

I’d say 95 percent of the time, it’s really great. They’re my two best friends, and we all have very specific skill sets and really trust each other. That said, there have been fights. There are times when we disagree, and the family-ness of this all gets crazy. Sometimes if I’m being really nice to my husband, he’ll be like, “Are you fighting with Michael? Is that why you’re being nice to me?” But we’re good about hashing it out -- especially my brother and I, because we grew up in a family where you don’t let things linger. My husband grew up kind of differently. But that’s probably another interview.

You’re very transparent about changes within the company, from service changes to internal changes. The website even calls John Heffner your “big fancy professional CEO.” Why is that?

We’ve always taken that approach, instinctively. Just be straight with people. When we had to raise our prices from $40 to $45, we emailed customers and explained that the increase was because our rent was raised, and our utility costs were increasing -- it’s to stay in business, not to try and get richer. And if we mess up an appointment or someone is unhappy with their service, they need to know we’re working to fix it. I’ve answered so many emails personally. In this day and age, where you can easily reach a founder via email or Instagram or whatever, it’s our job to not feed people bullshit -- because they can see through it.

The co-owner and general manager of JR Motorsports is also the author of 'Drive: 9 Lessons to Win in Business and in Life.'
David Meltzer | 1 min read

These tips on loans and grants can help.
Janet Gershen-Siegel | 5 min read

The Best Approach to Overcoming Adversity

Emmy-Winning Journalist Maria Bartiromo Explains What the Requirements of Winning

Why Apple Evangelist Oleksandr Kosovan Is Competing With His Favorite Company

How Not to Benchmark Your Way to the Bottom

Don't Be Intimidated By Giants in Your Market. Use These Strategies to Figure Out Who Your Real Competition Is.