By Kristin Hunt November 20, 2017
This story appears in the November 2017 issue of Entrepreneur. Subscribe »

Since launching in 2010, WeWork has become the go-to coworking space and office provider for growing startups and fledgling freelancers alike. With 165 locations worldwide, its affordable, stylish spaces are home to more than 20,000 businesses. But the crown jewel of WeWork’s portfolio is the company’s own headquarters in New York’s Chelsea neighborhood. A dramatic staircase with three large landings is outfitted with cozy couches and lounges, connecting three floors to provide synergy among WeWork teams (not to mention the 100 other companies that share the space). A communal kitchen encourages employees to chat as they grab an espresso or gather for weekly TGIM -- thank God it’s Monday -- dinners. A company that gets employees to celebrate the beginning of the workweek? Must be doing something right.

Related: From Cupcakes to a Musical Instrument Room, Step Inside the Dropbox Office

“We wanted to make this HQ an expression of the brand. It was built on getting people to interact as much as possible. There’s no kitchen on the fifth or third floor -- it’s on the fourth, which makes everyone go down or up there to get coffee, to get a beer after work. That, combined with the open stairs, makes this feel like one giant floor. We may not know everyone’s name, but at least we see them on a regular basis.”

“What we’re doing is unique in terms of research into workplace architecture and how that connects with technology. We have this test bed of thousands of spaces and track everything about how mem-bers use the space versus how architects have designed the space, and study this relationship.”

“If you’re driven and you want to have an impact, this is the place where you can see it become reality. A lot of places I’ve worked before, you can have impact at a smaller scale. You can do great work. But at some point, it plateaus. This is one of the rare places where it seems like there’s no limit to what you can do.”

“People think coworking spaces and startups are all play, but there is a significant amount of sophistication. Yeah, I’m wearing a duck T-shirt right now, but I’m also thinking about a partnership that involves a lot of moving pieces. Just because we have a lighter culture doesn’t mean that what we do isn’t some of the most innovative stuff out there.”

Creative Director for Europe and Israel

“My background is in hos-pitality, and I used to design restaurants, run them, own them. In a weird way, all the things I loved about that experience are replicated here on a larger scale. It’s 100 per-cent about the people. From day one, we’ve all been in the trenches together -- and we’re still in the trenches. The goals don’t get any easier. Yet we still keep achieving.”

“There’s no workplace that has this energy. I’ve worked in a lot of corporate buildings, but it’s always so dim and dull after you leave the lobby. Meanwhile, over here, you enter this buzz, and even if you’re having a shitty day, something here makes it OK.”

“I love morning yoga on Thursdays, which really speaks to the flexibility of the space. We can have a common area where we’re having tech demos, and the next morning it’s a yoga studio. I’ve seen people tie ropes to columns and create a boxing ring in the same place where I do interviews. I’ve run the stairs to do sprints. You get to see the space light up in different ways, and then every day doesn’t feel stale.” 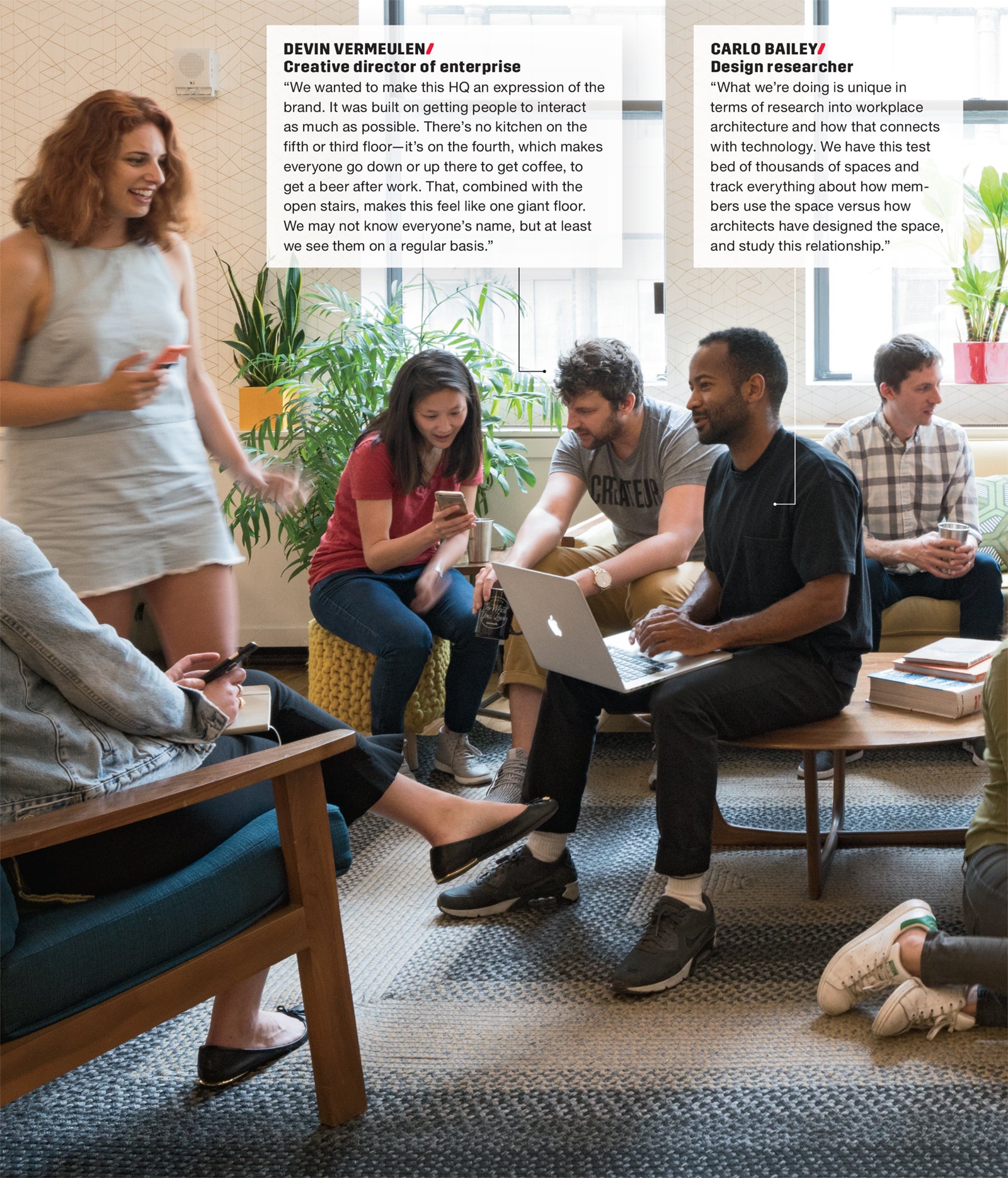 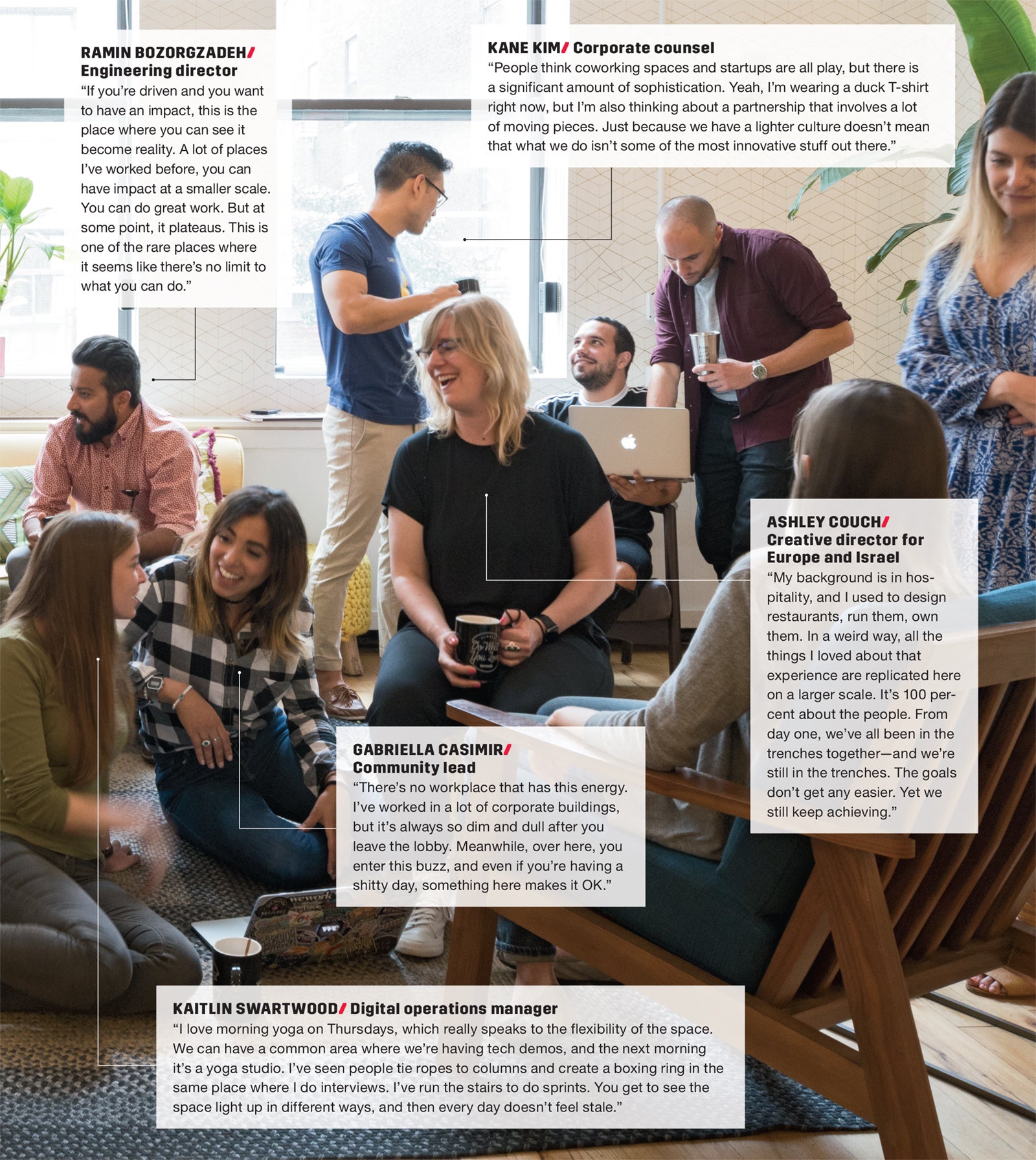 Kristin Hunt is a Brooklyn-based editor and freelance writer who covers culture, history and old movies.