The Next Generation of Entrepreneurs Are Amazing. Let's Support Them!

We need to stop the division between 'older generation' and 'younger generation.' That holds both sides back.
Next Article

Want to know why we put a 13-year-old entrepreneur on the cover of this magazine? There’s the simple reason, of course: We want to celebrate youthful achievement and inspire others.

But there’s a deeper reason, aimed at anybody old enough to rent a car. If that’s you, go take another look at Zollipops founder Alina Morse on our cover. She looks like she’s having fun, right? So carefree! Her whole life ahead of her! But make no mistake; she and her peers are coming to replace you. They are smart -- trust us, we’ve interviewed them, and they are frighteningly smart. They see problems with fresh eyes, unencumbered by the calcified logic that blinds those with more experience. They’ve watched you, and seen you fail and succeed, and absorbed the lessons. They’re savvy. They’re ready. 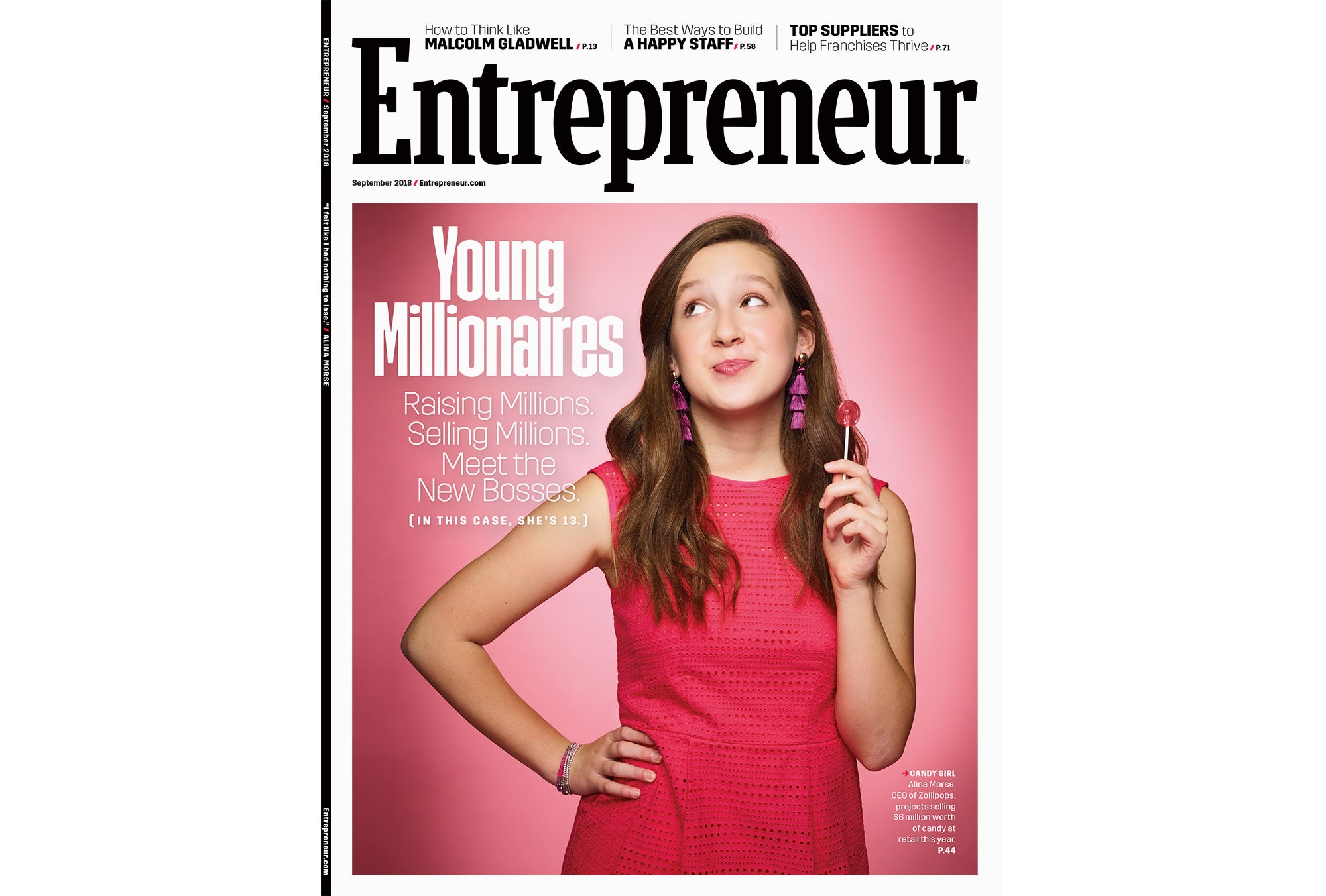 Many people don’t see this. They say young people are lazy or entitled. They say “millennial” or “Gen Z” as if it’s an insult. And when they do, they partake in one of the world’s oldest traditions. “Self-admiring, emaciated fribbles” is how the young generation was described in 1771. “So full of self-conceit and admiration of their own dear self” is how a writer in 1853 put it. “A whole 10 years of experience?!?! They must be geniuses by now” is what some dope tweeted at me in 2018, when I described millennials as leaders.

Related: 9 Assumptions You're Making About Your Millennial Employees That Are Dead Wrong

If any of this were true -- if at any time across history, the next generation were truly worse than the prior one -- then society would have ground to a halt. Innovation would have ceased. But it did not. We dismiss today’s youth the same way you and I were once dismissed by those older than us. It was never true, what they said. Not once. And it’s not true now.

If you condescend to the youth, you only blind yourself to danger. You won’t get destroyed by the competitor you watch closely; you’ll get destroyed by someone you never saw coming. That girl on our magazine cover? That’s who’s coming.

But this shouldn’t be a competition. Entrepreneurship isn’t a zero-sum game. It’s a community built on shared wisdom and mutual respect. So really, I write the above as a way to say this: We all benefit when we let these young entrepreneurs in. Respect them as they respect you. Learn from them as they learn from you. Then you’ll take part in another, grander tradition -- of paying it forward.

Consider the story of Jeff Lopez. In 2007, when he was 16, he wanted to start a marketing company but was too young to legally sign the paperwork. So Sadie Clayton, the coordinator at his after-school program, stepped in -- filing the articles of incorporation and other documents, and helping him build his company into something real. Then she continued to help him as he wrote for the local paper, which set off a crazy series of events: A fan of rapper Chris Brown read one of Lopez’s stories, then asked if he’d help develop a fan page. The page became so big that Chris Brown himself hired Lopez. (This was before Brown’s legal troubles.)

“If it wasn’t for my mentor being by my side,” Jeff tells me, “no one would have taken me seriously.” But today, major Hollywood studios take him plenty seriously. His company GLOOB works with them regularly; recent projects include Wonder Woman and Mad Max. Sadie and Jeff are still in touch. “I have learned more about myself through mentoring Jeff than I could have ever imagined,” says Sadie, now admissions director at Camden Center for Youth Development. “I learned patience, understanding and that everyone has their own path.”

That’s it right there! When we recognize talent in whatever form it takes -- any age, any background -- everyone benefits. All we must do is shift perspective. Because, yeah, you could look at our cover and say, “There’s a 13-year-old girl on the cover of Entrepreneur.” Or you could just say, “There’s an entrepreneur on the cover of Entrepreneur.” Both are true. But the second one is more useful for us all.

Want Something From Someone? Do the Work for Them.

The Pandemic Created New Opportunities. Here's How to Find Them.

Why 2020 Made Us All Better Entrepreneurs

Why You Should Break Through Your Boundaries

When's the Right Time to Pursue Your Passion? It's Right Now.