From Cupcakes to a Musical Instrument Room, Step Inside the Dropbox Office

At its San Francisco-based headquarters, the Dropbox culture is all about collaboration and a playful work culture.

By Kristin Hunt
October 4, 2017
This story appears in the October 2017 issue of Entrepreneur. Subscribe »

Since its launch in 2007, cloud-storage service Dropbox has made in-office collaboration a breeze for millions of businesses across the country, and that spirit of teamwork radiates throughout the 1,500-person company's San Francisco headquarters. The space, designed by Rapt Studio, features a chic library, designated brainstorm areas, a rec room full of musical instruments and a massive commissary serving up delicious food -- with an emphasis on cupcakes. In fact, "cupcake" doubles as an official company value, one that signifies a playful work culture. And they don't mess around: One quick tour through the ultra-collaborative space and you'll witness so much "cupcake," you'll leave with a toothache.

"When I started, we were 350 people. Now we're north of 1,500. We've had to scale how we communicate, and the way we work together has had to change. You think about, OK, what worked at 300 doesn't work at 1,000, but how do we still capture the culture we want? It's been really exciting and really difficult, but I like where we're going."

"I know there's that stereotype of toxic cultures at tech companies, but to be honest, I've never run into that here. I came from the agency world, which mirrored the show Mad Men down to a T. So this has definitely been refreshing."

"I'm a former professional athlete, so I love having a gym on-site. It's really nice that at any point in time, I can go down there. It's also great that it's OK to take 45 minutes and do what you need to do. Everyone knows you come back refreshed. No one is like, "Oh, Kelly was gone for 45 minutes. She must not be focused.'"

"Our desk pods are nicely removed from the walking space, so it's open but private enough that you can get work done. There is a space on the first level called Deep Focus that's intentionally isolated, for those times when you want to just put on headphones and crank through some work. But then there are open spaces, like the roof, or Little-R, which is our coffee shop."

"We have VTO, or volunteer time off -- they give us days off to volunteer somewhere. It's probably my favorite perk because you get to not only take time off but also do some good in your community. My manager is always pushing us to do that. It's not just something you can do if you want. It's encouraged, which is nice."

"We have unlimited PTO, which requires conversations with your manager about taking time off. I just went to Japan for a couple of weeks, and with my manager's support, I was able to unplug. There's an approach of "Be here when you're here, and when you're not here, don't be.'"

"The editorial team works on storytelling around Dropbox and our technology and innovation, so it gives me a good reason to talk to just about anyone in the company. It's a great opportunity to learn a lot about how a tech company works and have a role in helping shape that."

Related: Music Is Everywhere at Sonos, Including a Hidden Listening Room

"There are a bunch of different groups we can get involved in. There's a basketball group, yoga classes in the office -- even an a cappella group, Syncopation. And of course, we have a bunch of diversity and inclusion groups here. I actually cofounded and lead Asians@, an employee resource group that celebrates Asian-­Americans in the workplace." 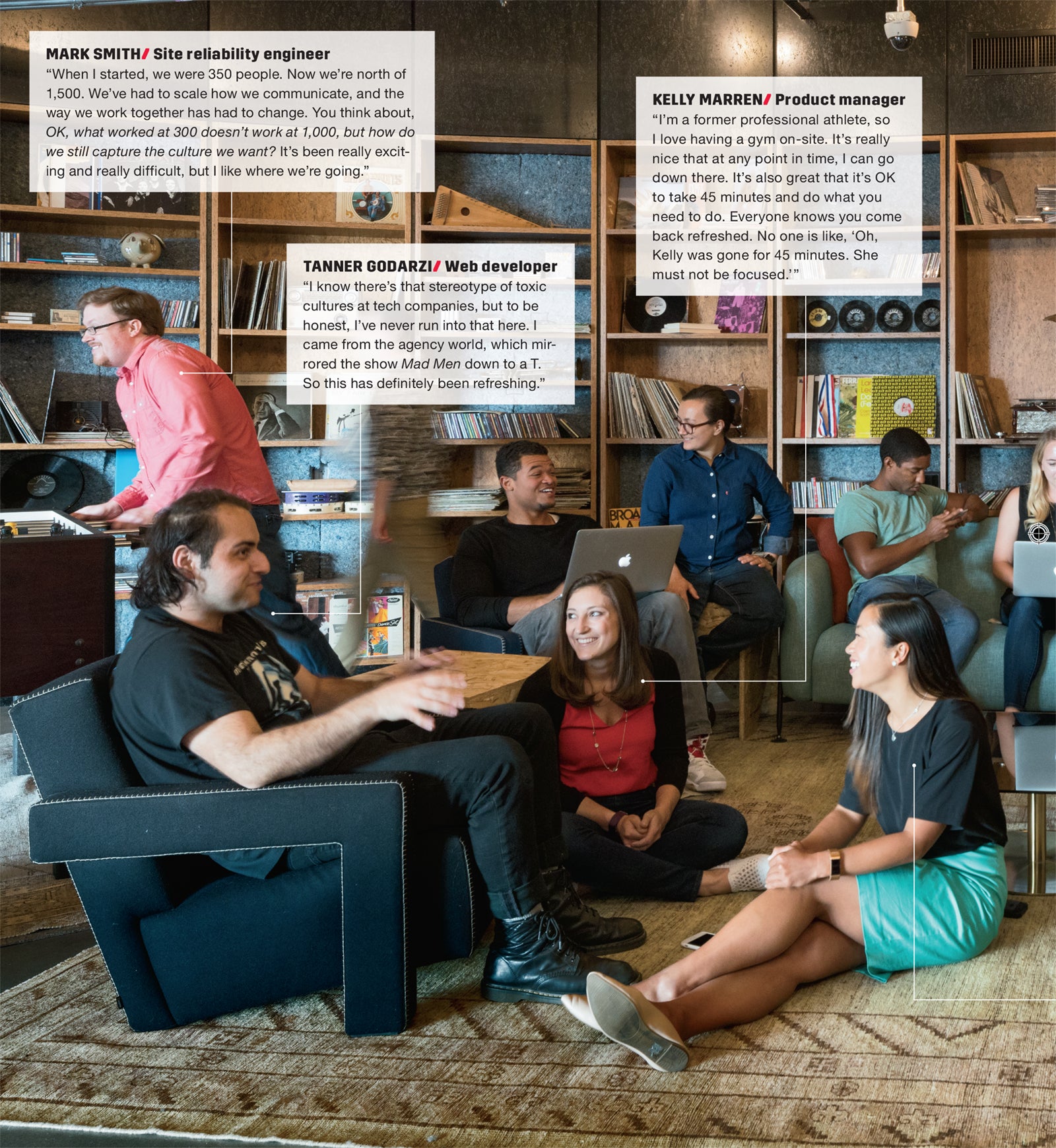 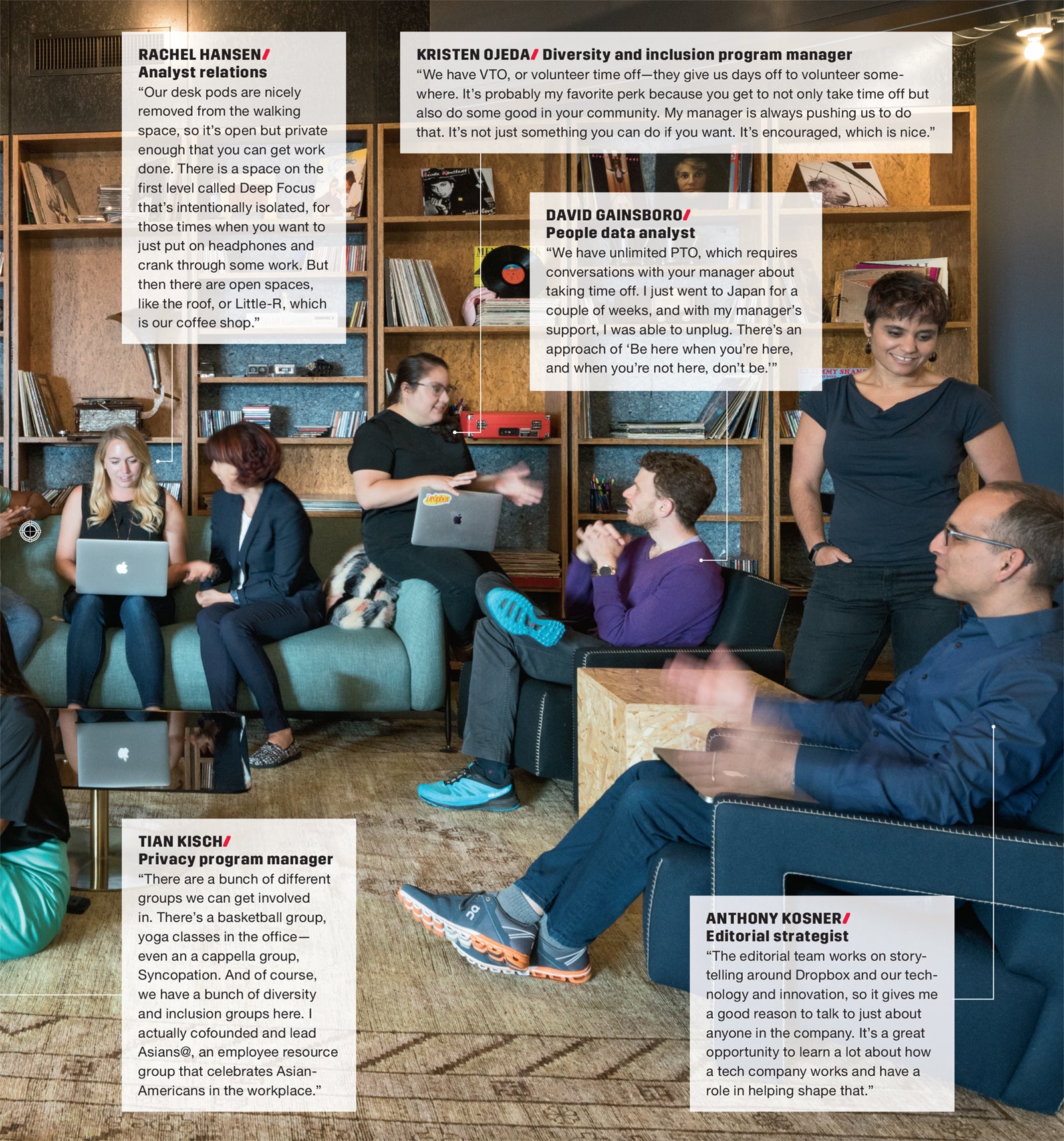 Being a Human Magnet Is Key to Your Company's Success. Here's What That Means.