From Dough to Dough 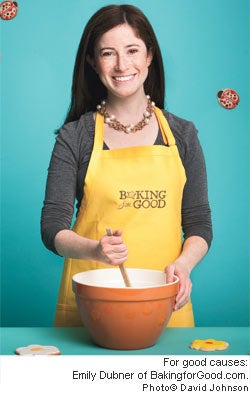 When Emily Dubner was a kid, she took her school's bake sales seriously. She worked with her mother to prepare brownies and cookies from scratch, carefully packaging them for sale. And her efforts didn't end there. "I was usually the one running the bake sale, too," she says.

Last year, Dubner was visiting her parents when a package arrived at the door. A friend had sent a gift of baked goods. Seeing her mother's delight made Dubner think of how well received baked goods are as gifts. Then, an idea began to form.

"There's such a great tradition of using baked goods as a way to raise money," she says. "Since everything is online these days, I began to think about what a bake sale would look like if it was brought online."

It would look like BakingforGood.com, the company she founded in September, within a few months of her mother's special delivery. The concept is simple: Buy baked goods and support worthy causes.