By Jennifer Wang
June 3, 2013
This story appears in the May 2013 issue of Entrepreneur. Subscribe »

"It's not easy to commercialize robots," says Steve DiAntonio, director of business development at the National Robotics Engineering Center, an operating unit within Carnegie Mellon University's Robotics Institute in Pittsburgh. "You have to find an application that is going to be very valuable to really return the investment well." Here are some robots with a good shot
at doing just that.

Company: Blue River Technology in Mountain View, Calif., has raised more than $3 million to develop a robot that addresses the No. 1 problem in agriculture: eliminating weeds without adding herbicideas to food crops, genetically modifying the seeds or resorting to manual removal. "The majority of crop-yield increases have been about weed control," explains co-founder and CEO Jorge Heraud. The 2-year-old company, which has 10 employees, will deploy its first machines this year on California lettuce crops.

Robot: Thanks to advances in computer vision and spray technology, Blue River's robot provides an alternative to GM crops or blanketing a field with herbicides. Pulled behind a tractor, the robot incorporates a camera that looks down at the field. Images are processed in milliseconds; the robot determines whether a plant is a crop or a weed and sprays only the latter.

Impact: It's better for health, the environment and farmers' margins, and could lead to more affordable food for consumers. And the technology has the potential to disrupt the market for all pesticides--worth roughly $25 billion, according to market publisher SBI--and biotech crops, worth $13.3 billion, according to the International Service for the Acquisition of Agri-biotech Applications. 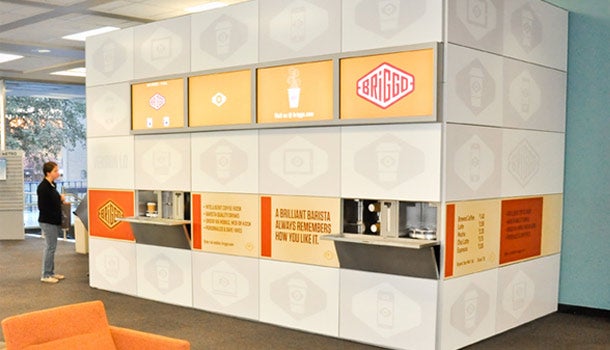 Company: Austin-based Briggo has automated the process of making a barista-brewed cup of coffee. At press time, a prototype in operation at the University of Texas, Austin, was due to be upgraded with the official commercial model. The company raised $3.2 million last year and plans to push test kiosks at hospitals, airports and corporate campuses.

Robot: Company founder Charles Studor hired champion barista Patrick Pierce to serve as the model for his "robotic barista." Behind the walls of a kiosk, a robotic mechanism grinds coffee to order, using a real tamper and stable water temperature to make precise shots of espresso, as well as a steam wand that mimics the precise angle used by Pierce. The machine can handle a high level of customization and can make multiple drinks at once. "This is the most complex coffee machine on the planet," Studor says. "It replicates what champion baristas do every time they try to make their best shot."

Impact: Consumers get 24/7 access to gourmet coffee drinks. Briggo gets a piece of the colossal $32 billion coffee market, as estimated by the Specialty Coffee Association of America. 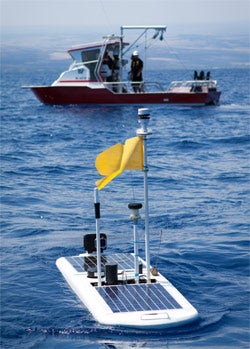 Company: Since 2011, Sunnyvale, Calif.'s Liquid Robotics has seen year-over-year revenue increase 60 percent from selling ocean observation and surveillance services and products. Its Wave Glider, an autonomous marine robot, harnesses wave energy for propulsion and has set world records for mission duration by crossing the Pacific Ocean from California to Australia. Data captured can be used for everything from seismic surveys to strategizing submarine warfare, and operating the Wave Glider is far cheaper than chartering a ship, deploying a buoy or using satellites. About 180 units are in operation now; CEO Bill Vass says there's a potential market of tens of thousands.

Robot: Vass likens the Wave Glider to a floating server rack made up of smartphones. It can be upgraded in situ and automatically daisy-chains, "self-swarming" with other units to get better network coverage. The system requires no human intervention because it harvests unlimited energy from waves. "We ran through 12 hurricanes this year, and for the first time in human history we collected ocean surface data ... and turned cameras on and saw waves up to 60 feet tall and put no humans at risk," Vass says.

Impact: It could change humanity's relationship with the ocean. "As climate change comes upon us, we would have much better ability to manage the ocean, to conserve and maximize our resources, better protect people against severe weather and tsunamis ... and have broader communication for better managing ships and fisheries," Vass says. 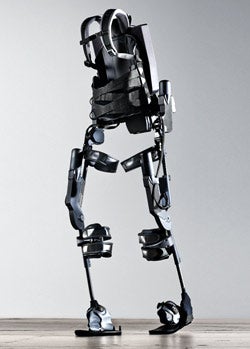 Company: For the last five years, Ekso Bionics, located in an old Ford manufacturing plant on the marina in Richmond, Calif., has been working on a bionic suit to help paraplegics walk again. The device was released in February 2012, and within a year the company had documented approximately 1 million steps taken by some 500 patients. Co-founder and CEO Nathan Harding declares that the 10-year goal is to get 1 million people walking with the device.

The base cost now is $110,000, but as demand increases, the price should plummet. "Nothing about the device should cost more than a high-end motorcycle," Harding says. "The other side is reimbursement, and we think we have a rock-solid argument to bring to insurance companies, since the lifetime cost of a spinal-cord injury is $4.6 million."

Robot: Ekso's technology is based on load-carrying exoskeleton units developed for the military, but with dramatically lower power consumption--only 5 watts (down from 5,000). Software and sensors in the device's hip and knee area judge when the wearer's weight distribution is safe for the suit to take a step. It can be sized to a specific patient in five minutes and has "anti-stumbling software" that ensures at least 200 steps for first-time walkers.

Impact: Forget about wheelchairs. "I think you're going to commonly see grandmothers in their hip new set of bionic legs," Harding says.

Company: Boston-based Rethink Robotics is the much-anticipated follow-up to Rodney Brooks' first startup, iRobot. Rethink's robot, Baxter, is billed as the first that can work alongside people in a manufacturing environment, without safety cages. Brooks says he is getting keen interest from the thousands of U.S. manufacturers with fewer than 500 employees, as well as larger companies. The base model costs an affordable $22,000.

Robot: The vaguely human-shaped and -sized Baxter is loaded with cameras and sensors that it uses for adaptive learning. It can avoid collisions, self-adjust to changes in conveyor-belt speeds and "remember" objects, halting operations if conditions are ambiguous or if it perceives that there is something happening outside the desired parameters. Setup takes less than an hour. "Current industrial robots are like mainframe computers, while Baxter is more like a PC," Brooks says.

Impact: The affordability of Baxter could lead to a reduction in outsourcing among small U.S. manufacturers. 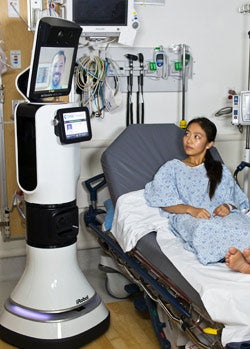 Company: InTouch Health in Santa Barbara, Calif., has been producing remote-presence robots for the healthcare industry for more than a decade, under the direction of founder and CEO Yulun Wang. InTouch robots are in 700 hospitals and handled 80,000 physician-patient interactions last year; in January, the company's newest model, the RP-VITA, became the first FDA-cleared robot with autonomous navigation technology for telemedicine.

Robot: The VITA was developed in partnership with iRobot. It travels at a moderate walking pace and features sophisticated environmental awareness and navigational technology that makes it easier for clinicians to direct--via a Wi-Fi-connected iPad--to various areas of a hospital. According to Wang, it's particularly useful in the emergency room and critical-care units, where time and access to specialists via video feed can literally mean the difference between life and death; for example, a doctor on the other side of the hospital (or at home) can direct the robot to the bed of a patient who needs immediate attention, like someone suffering from a stroke, and advise medical staff and patients on the scene.

Impact: Finally, a solution for providing quality healthcare and access at a lower cost. "We can optimize patient care by leveraging our scarce resources--physicians--so they can provide care across a larger area," Wang says. 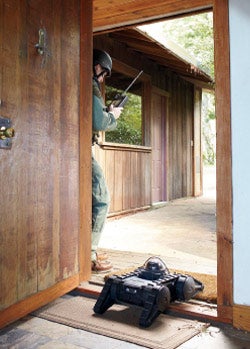 A tactical-use unit from RoboteX

Company: RoboteX, founded in 2007 in Palo Alto, Calif., by Adam Gettings and Nathan Gettings (also CTO of Palantir Technologies), deployed its first "Robocops" at the end of 2009. Since then, police and fire departments around the country have bought hundreds of the tactical-use robots, using them successfully in hostage and surveillance scenarios. About one-fifth of the SWAT teams in California own a unit (pricing starts at $12,500). The company, which is nearing profitability, recently branched out with personal and enterprise security models, scheduled to begin shipping in June.

Robot: The remote-controlled robot's base resembles a small battle tank, and a variety of plug-in accessories are available as add-ons, such as robotic arms that can search for and extract bombs or alleviate chemical spills. In hostage situations, the device can bring in supplies and support negotiations via audio and video feed. "We are aggressive in innovating--we've filed close to 30 patents," Adam Gettings says, pointing out an ever-improving drive system that addresses indoor navigation issues, a power system that works with commodity batteries and a software operating system with a super-fast feedback loop.

Impact: Robots could become the standard in security. "We've just barely scratched the surface," Gettings says. "It's a huge frontier."

Company: Wasiq Bokhari, founder and CEO of Menlo Park, Calif.-based Qbotix, has created a robotic system to improve energy collection at solar farms. With $12.5 million in backing, the company has 30 employees and a customer network in the U.S. and Japan.

Robot: Qbotix's easy-to-install robots, which came to market in September 2012, are smart, rugged and autonomous, and can work in middle-of-nowhere solar farms for decades, under extreme temperatures and high winds. Small robots are installed along a monorail track to control about 1,200 small solar panels (enough to power 30 homes), rotating each toward the sun once every 40 minutes. The devices also have sensors that collect data and track dust buildup that may affect operations, allowing ample time for a fix.

Impact: The company says the system generates up to 40 percent more energy than standard solar units and reduces electricity costs by up to 20 percent. "There's no question that everyone will use these robots once people understand what it can do. We put a step function in the graph of the solar industry road map," Bokhari says, noting the global solar energy industry's annual growth rate of 10 to 15 percent. The nonprofit Colorado Solar Energy Industries Association earlier this year stated that the industry is worth $100 billion.