How a Craftsman Turned His Handiwork into a Cutting-Edge Business

By Margaret Littman
September 29, 2011
This story appears in the October 2011 issue of Entrepreneur. Subscribe » 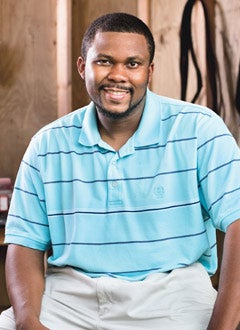 It's a good thing no one discouraged Quintin Middleton from playing with knives as a kid. "I had a wild imagination," he says. "I would make a sword from cardboard while I was watching Conan movies. I would make anything into a sword."

It paid off. Middleton now runs his 1-year-old, one-employee company--Middleton Made Knives--out of a 12-by-16-foot shop in his backyard. But the business is more than a mere hobby for 26-year-old bladesmith Middleton. He plans to expand his Saint Stephen, S.C.-based company to include a factory that will produce his high-quality culinary knives on a larger scale.

"I would like to see more American-made knives," he says. "Most are made overseas." Middleton will continue the path he took to the industry, teaching others the craft of knife-making through an apprentice program. "Each knife will still go by me," he says. "I test each knife, and I will continue to."

The American Bladesmith Society (ABS) awards three levels in knife craftsmanship: apprenticeship, which Middleton has completed; journeyman smith; and master smith. There are just 180 master smiths in the world, including Middleton's mentor, Jason Knight. Of those 180, Knight estimates just 10 do so for their full-time income (as he does, and as Middleton will when he reaches that status).

Middleton has the "passion of an artist," Knight says, but that's not his sharpest quality. "Quintin knows more about marketing than most people who have gone to college for it."

Middleton started out determined to make culinary knives (rather than the Bowie knives Knight makes, or hunting or other blades), but he is not a chef. So he sought the feedback of Craig Deihl, executive chef at Cypress in Charleston, S.C. Deihl agreed to test and critique the Middleton Made blades. 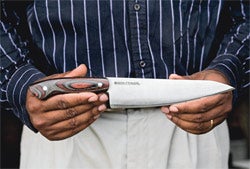 "There are not a lot of people making knives like this," Deihl says. "He sources out unique materials to make the knives, like carbon and wood. They look great and perform well."

Several chefs working in the Cypress kitchen have purchased Middleton knives, and Deihl is impressed with the personalized attention they have received. While some may worry that quality will suffer as Middleton expands the business, Deihl thinks the opposite will be true.

"I am a firm believer that the larger you get, the level of quality goes down," he says. "But in this case, he needs to produce more knives to get better."

Initially the majority of Middleton Made Knives' sales came from Middleton's one-on-one relationships, like those at Cypress, and through online sales. But the company quickly found that chefs were hungry for a non-mass-produced knife that stood up to their high-usage demands. Last year Tin Dizdarevic, a foodie working as Middleton's de facto marketing manager, started to get the word out: "I sent out invites on Facebook to 700 to 800 people in the industry. Within 48 hours, 400 became fans." The majority are chefs, although some are home cooks who crave high-end equipment. Each will wait six to eight weeks and pay $300 to $400 for a custom knife.

Middleton Knives routinely sell out at Whisk, a shop in the Williamsburg neighborhood of Brooklyn, N.Y. Assistant manager Kari Johnson says the store fields many calls from people who have seen the knives online, adding, "We are selling them as fast as he is making them."