Amanda Ealla's own childhood experiences of feeling like she didn't belong drove her to start ISH Dolls. Here are three lessons she's picked up on the journey of starting her own business.

By Mita Mallick
January 19, 2022 Updated: October 23, 2022
Opinions expressed by Entrepreneur contributors are their own.

I remember having classmates over for a playdate once in elementary school. My friend walked by my parents' room and peeked in. "What are those funny looking dolls? Why are there flowers in front of them? Why is there smoke burning from that stick?"

I explained that it was my mother's prayer area. As a Hindu, my mother prayed every evening after bathing, offering flowers and lighting incense. And those were not dolls; they were our Hindu gods.

"You pray to a statue with an elephant head?" she laughed. Our prayer area later became the talk of my second-grade classroom. The other kids just couldn't understand why we prayed "like that."

"Growing up as a Hindu, I also didn't feel like I belonged in our Brooklyn community," shares Amanda Ealla, founder and CEO of ISH Dolls. "I wanted to change that experience for my own kids. That's why I started ISH Dolls."

Although Ealla was one of the only Hindus growing up in her community, today demographics in the U.S. are rapidly changing. Hindu Americans are growing in influence and spending power. Today, Asian Americans have $1.2 trillion of spending power, with Indian Americans alone having more than $400 billion of that amount.

Brands like Target, American Girl Doll, Shoprite, Costco and Lexus have all marketed Diwali, one of the largest and most significant religious holidays, to Indian Americans. Diwali symbolizes good defeating evil, and many Hindus offer prayers, light lamps, decorate their homes and exchange sweets and gifts. Although this movement in the marketplace is significant, there is still a large area of opportunity to increase the cultural awareness for our children. This is where ISH Dolls has an opportunity to make an impact in the market.

Related: How One Entrepreneur Is Attempting to Revolutionize the Mexican Food Industry -- And Change the World -- Using One Unexpected Ingredient

"The name ISH comes from the Sanskrit word Ishta-devata, which means cherished deity," Ealla says. "My hope was to bring these vibrant and significant Hindu figures alive through our plush dolls. These are not just for Hindu children, but all children. Because when all of our families are more culturally aware, we won't be as afraid of the unknown and can truly celebrate and honor all communities." 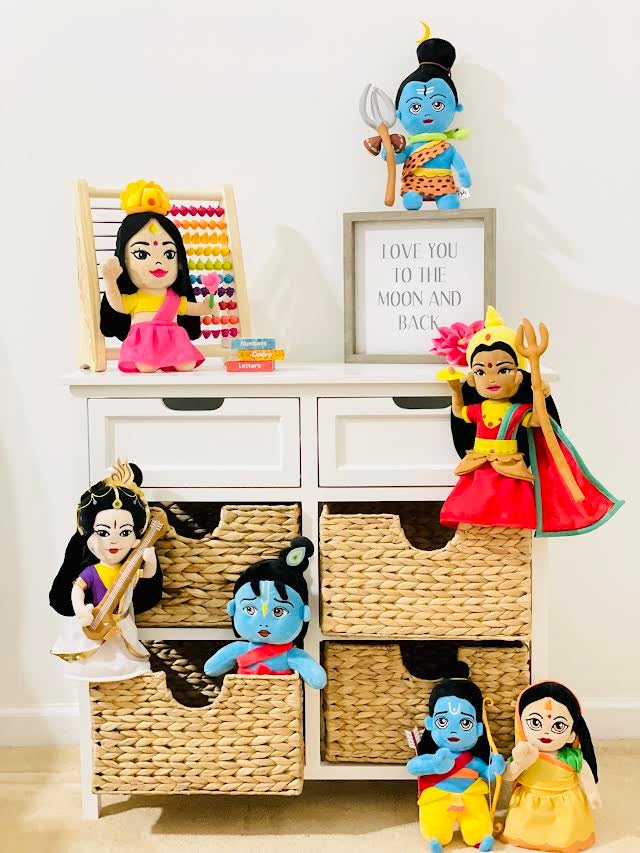 Ealla's own childhood experiences of feeling like she didn't belong drove her to start ISH Dolls. Here are three lessons she shares on her journey of starting her own business:

Know what's important to you

When the pandemic began, Ealla had two small children at home. Like many working mothers, it was a pivotal moment for her. "I was homeschooling my kids while trying to make an impact at work, and I was struggling to find my balance," Ealla says. "I remember being in the middle of a critical meeting, and my older child kept coming in needing help with his schoolwork while my younger one was having a huge meltdown. That was the moment I knew I needed to make a change."

For as long as Ealla can remember, she has been passionate about starting ISH Dolls and creating a line of products her children would be proud of. "I knew what was important to me, and that was starting this business. The pandemic made me realize it was now or never." With the support of her family and friends, and relying on social media platforms to get the word out, she quit her job and started the journey.

Ealla recalls a lot of long nights, brainstorming sessions, planning, replanning and lots of packing and shipping products. She became a frequent visitor at Michael's arts and crafts, set up her own Instagram shoots and learned how to use Illustrator and animation tools. "It felt right. It felt fulfilling," Ealla says. "I knew I had found my purpose and the impact I wanted to make in this world."

Related: How This Founder Is Challenging Us to Unlearn Toxic Expectations When it Comes to Beauty

Over a successful career at Moody's, Ealla had a track record of problem solving. When she started ISH Dolls she had no background in toys or manufacturing, so Google became her best friend. She researched everything she could to learn about manufacturing toys. She did virtual visits with manufacturers over Zoom, working through several iterations of product ideas.

"Doing my research was key," Ealla says. "I was unable to find any type of Hindu goddess figures when we launched in 2020. The ones on the market weren't what I was looking for, and all the details mattered. I was on a mission to create quality products that did justice to these figures and their rich histories."

When creating the Goddess Durga doll, the fabric the manufacturer sent to Ealla for the skin color was too light. "The fabrics would look one way, and when we produced the doll it looked another way, and we went back and forth," Ealla says. "I knew from my research that Goddess Durga's skin color was darker, and we needed to stay true to the deity stories." When she reached out to trusted customers, their feedback matched Ealla's research. Although Ealla lost some money on early iterations, she knew launching a doll with accurate representation was more important.

Related: Why This VC Is on a Mission to Get More Women to Write Checks for Female-Led Businesses

"I am the proud daughter of immigrant parents," Ealla says. "I credit my parents for my entrepreneurial spirit. They faced a lot of hardship, but together they showed me the value of resiliency, perseverance and the importance of being resourceful."

Ealla's grandmother was also a source of inspiration for Ealla when she started out. Her grandmother raised 11 children in a small village in Trinidad, and she owned a small store that helped support her family. "She sold whatever she could get her hands on," Ealla says. "She taught us to never give up."

To pay it forward, Ealla has selected a manufacturing facility based in Trinidad. By 2022, most of the manufacturing for ISH Dolls will be done there. "This island has suffered a lot during the pandemic," Ealla says. "Right now it's a small factory, and as ISH Dolls expands, we will employ more people."

As she looks to the future, Ealla wants to continue to expand ISH Dolls while balancing the line between cultural appropriation and celebrating and amplifying Hinduism through meaningful toys. Although its early growth can be attributed to word-of-mouth and digital marketing, Ealla is looking for investors to help scale and explore retail opportunities.

"As a Brown woman, it's an exciting time to be a founder. There has been a huge shift in supporting women entrepreneurs," Ealla says. "We need to trust ourselves and realize that we are capable of designing our own futures, even if it's a future I could have never imagined for myself as a little Brown girl growing up in Brighton Beach, Brooklyn."

Related: How this Founder is Disrupting the World of EdTech & Empowering More Students to Break Into Tech