The CEO of GoDaddy's Secret to Creating a Culture of Experimentation

When Aman Bhutani became CEO of GoDaddy in 2019, he saw a problem: The company had a good culture of experimentation, where individual departments were running many experiments, but it didn't have a good system of experimentation.

As a result, the team's experiments weren't driving as much innovation as they could. "Experimentation is about mindset," Bhutani says. "It's not something that people who are not aware of can suddenly discover. You have to coach people through it."

So that's what he set about doing — drawing from his experience as senior vice president at JPMorgan Chase and then as president of Brand Expedia Group, which has an experiment-driven culture. As a result, since Bhutani took over, GoDaddy has released a slew of new products — including improvements to the results when customers search for domain names, a product to help people sell their domain names on the secondary market, and more — all of which have driven millions in increased sales. Here, Bhutani explains how to build a culture of experimentation, and just how impactful it can be.

Related: Transform Your Business by Encouraging Experimentation and Change

When you arrived at GoDaddy, you put a large emphasis on experimentation. Why?

There are a couple things about experimentation that I think everyone needs to understand. The first is that experimentation is truly about doing things that you don't already know how to do. It's about trying something. It's about measuring the results and then taking the next step. And that puts the customer in the driver's seat. What you have is a hypothesis, and the customer is telling you how engaged they are.

So what did you see going wrong at GoDaddy?

You don't want every team doing their own experimentation with their own principles and their own way of doing it. What you want is one central mindset that everyone adopts. Without that, you're never going to have a systemic approach to it. But even if large parts of the company have systematic experimentation, to drive it to every part of the company you really have to elevate it as something that's very important. Have you heard the term HIPPO?

I'm guessing it's either an acronym or there are large animals in the office.

Yes. HIPPO stands for a culture where the Highest Paid Person's Opinion wins. And here's the thing: If you look over many decades, the HIPPO culture created lots of good stuff. People in high positions are right a lot. But when we think about companies today, the rate of innovation now — the rate of change now — is faster than ever before, and it's accelerating. So you're opening up more and more areas where folks are going in and trying to make things happen. There are no HIPPOs.

Or the highest-paid people might have been at an organization the longest, which sometimes means they have the least fresh ideas or feel most invested in the way things have been done.

Related: To Stay Successful, You Must Continuously Evolve Your Business

So how do you begin to build an actual structured system for experimentation?

The number one thing is transparency. It's not about me, the leader, holding people accountable. It is about creating a culture where we say, "Look, write your experiment and hypothesis, and then have a peer take a look at it." We have a very systematic approach at GoDaddy. Every experiment must have an observation, a hypothesis, a test of the data, the results, and success criteria. But then we make those transparent across the whole company. Every month, every experiment is shared with anyone in the company who wants to see it.

Then you want to win hearts and minds one by one. It takes a little bit of practice and time for people to get there. But once they start doing it, they love it, because the customer tells them whether their work was impactful or not. Then we want to move as quickly as possible to bring the tooling in place. Because if the tooling is too hard and conducting an experiment takes too much time, even if people want to do it, they're just not going to do it. 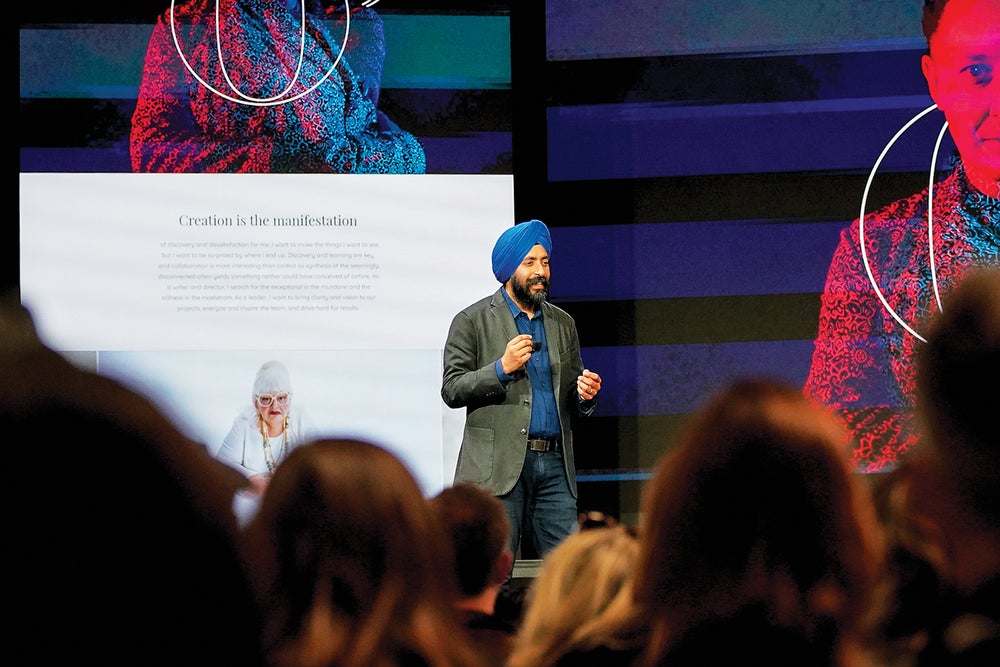 Aman Bhutani in 2019, speaking at a GoDaddy event in San Francisco.
Image Credit: Courtesy of GoDaddy

I keep thinking about your HIPPO problem. Is all of this about driving toward empowering folks much lower than the HIPPOs?

A good idea can come from anyone. We want our people to be the best version of themselves they can be. And the way to do that is to allow them to try their ideas and then learn from their ideas versus trying to get them to want to be right all the time. In a HIPPO culture, people want to be right all the time. But in experimentation, there are three possible outcomes: It's negative; it's neutral; it's positive. And guess what? At scale, it's going to be a third, a third, a third.

Say a leader of a company feels like they have a good culture of experimentation but are unsure about the strength of their system. What should they start evaluating?

Everyone doing experimentation should put their experiments in one place. Then you should look at win rates. If win rates are very high, that means people are just doing what they want. Somebody wanted to launch a product, so they went ahead and did it, and then they wrapped it into an experiment framework and said, "Look, it was an experiment." If you're pushing lots of new ideas, and you're doing really innovative things, then your success rate is going to be lower than a third. Too many neutrals mean people didn't know what they were doing, or they're doing things that are too small. Don't do things you can't measure. You don't mind the negative experiments, because they're all telling you the shots-on-goal that you took that didn't work for now, so you can focus on the winners. You want a win-plus-loss rate — winners and losers — that is healthy.

You also want people to have started with the customer and worked backward. What was the observation? What was the hypothesis? And you want people to try things. If they try something and it doesn't work, and they still keep pushing it all the time, that's not good. If they try something and never try it again, that's not good either. You want to see a healthy tension for leaders to be pressing on things, to say, "Why didn't it work? Can we do it better?" And when that conversation starts, and peer reviews start happening, and people are telling each other that, "Hey, you tried this. I really liked it. But did you think of this?" Now you know you have the experimentation mindset.

Related: How Can Leaders Create Environments That Drive High Performance, And What Are the Building Blocks That Need To Be In Place To Help Them Thrive?