Undergrads Clean Up With an 'Indoor Outhouse' Business for Pets

By Joel Holland
November 25, 2011
This story appears in the December 2011 issue of Entrepreneur. Subscribe » 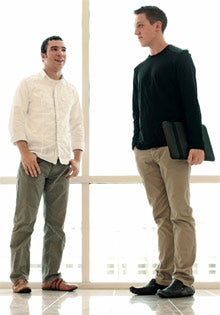 For Dylan Balsz and Tilden Smith, launching a successful pet business while undergrads at Chapman University in Orange, Calif., was a walk in the park … without the walk or, well, the park.

The co-CEOs of International Pet Solutions are thriving with a product called PetLawn, billed as an "indoor outhouse for pets." It's exactly that: a 20-by-30-inch patch of antimicrobial, odor-fighting artificial grass, lined with absorbent pads and equipped with waste bags--all so your dog can do his business without leaving the house.

Our Bad. Chevy Accidently Leaked Photos of the 2024 Corvette Hybrid