Success in game development and knowing when to quit landed PopCap $22.5 million.

By Gwen Moran
January 18, 2010
This story appears in the February 2010 issue of Entrepreneur. Subscribe » 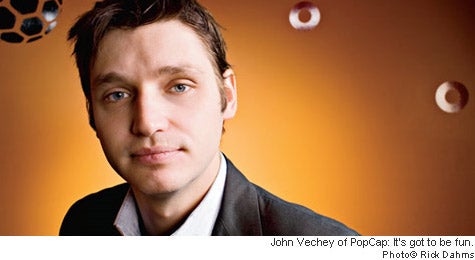 John Vechey has more than 240 employees, and sometimes he has to crush their souls. The affable co-founder of PopCap Gamesisn't heartless, it's just that for PopCap to be the "Pixar of the gaming world"--continuing to produce multiplatform hits such as the blockbuster Bejeweled, which has sold more than 25 million copies--you have to cancel a lot of projects that don't measure up, even if staffers have been devoted to them for a long time.

"We canceled a title that was in development for three years," Vechey says. "It all goes back to 'Is it fun?' Every game has got to be a great game. If it's not, we'd rather cancel it.

That's exactly the kind of ethic that attracted Rob Ward, a managing director at Meritech Capital Partners, in Palo Alto, Calif., who met with Vechey and co-founders Jason Kapalka and Brian Fiete after seeing PopCap CEO Dave Roberts speak at a conference. Ward and his team, who specialize in late-stage VC investment, had been studying the gaming space for five years, yet hadn't pulled the trigger on any deals. But in PopCap, they saw a flawless streak of successful games and blue-sky potential in retail stores, various formats online, in mobile devices and on desktops. That shook loose $22.5 million in funding.

"That huge market opportunity, as a late-stage investor, is what always gets us excited," Ward says. PopCap had made impressive moves into social network and mobile gaming with titles such as Bejeweled and Zuma while avoiding some of the sketchy revenue models that caused negative publicity for competitors last year. PopCap has a "try before you buy" model that lets users try the game for free, then pay to download it if they like it.

Founded in 2000, PopCap made its first foray into outside funding when it had to pass on purchasing a promising small gaming studio because of concerns about the economy. Although PopCap reported an 85 percent jump in revenue from 2007 to 2008, the acquisition would have left the company's reserves too low for comfort during a recession, Vechey says. He never wanted to be in that position again, so the Meritech deal was struck. The funding will allow the company to strike at good opportunities and invest in game development.

It's no surprise that Ward wants to see expansion internationally. "They have that rare opportunity to be a leading casual game company domestically and internationally as well as multiplatform, including social gaming. They need to think big about all of the different opportunities and make this a billion-dollar company," he says.

Vechey won't say much about upcoming games, but he did divulge that the company has registered a trademark called Yeti Train. "Make of that what you will," he says.