If At First You Do Succeed

Solvate's founder closed its Series A round with a VC firm that had passed on his previous venture--and regretted it.

By Carol Tice
December 11, 2009
This story appears in the January 2010 issue of Entrepreneur. Subscribe » 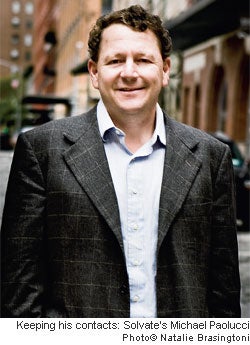 Serial entrepreneur Michael Paolucci learned three valuable lessons while hunting for funding for his new venture, temporary tech-help 2.0 company Solvate: Never neglect your contact database, don't be afraid to go up to bat again where you've previously struck out, and be ready to start on the farm team.

When he went on the stump for Solvate's Series A funding round with co-founders Julie Ruvolo and Rick Lamb last summer, Paolucci first looked up a couple of old contacts. More than a decade back, he had pitched his previous startup, ad network 24/7 Media, to RRE Ventures partners Stuart Ellman and James Robinson IV. But they passed.24/7 went public in 1998 and sold in 2007 to communications services giant WPP Group for nearly $650 million. Although Ellman and Robinson hadn't backed him, Paolucci says he'd stayed friendly and in touch with the RRE partners over the years, often running into them at New York City venture-capital events.

Ellman wanted RRE to look closely at Solvate, which offers tech help in increments as small as five minutes. But he didn't want to vet the company himself, concerned that his feelings about missing the 24/7 opportunity might cloud his judgment. Paolucci found himself referred to another RRE partner, Eric Wiesen, who concentrates on New York-area deals as well as Internet startups. Unfazed, the Solvate team met with Wiesen twice before presenting Solvate to the complete slate of 10 RRE partners.

"Solvate's story touched on themes I'd already been thinking about," Wiesen says, "like using the Internet to decrease overhead for a variety of business services. It was a very large idea in what we think will be a very big market."

He was impressed that, since starting up in 2007, Solvate already had landed several big clients, including international goods conglomerate Pernod Ricard, and had grown to 50 employees. Wiesen also liked that Solvate had seasoned VC firm DFJ Gotham Ventures as a seed-money investor. Solvate closed its $2.3 million Series A funding round in October, with both DFJ and RRE participating. DFJ principal Thatcher Bell and Wiesen both joined Solvate's board.

"This investment is a reflection of what we've been able to do so far," Paolucci says. "We're capitalizing on this megatrend of people working from anywhere."