The Opportunity in Opinion

PowerReviews proves the value of filtered, aggregated customer feedback by closing a third round of funding. 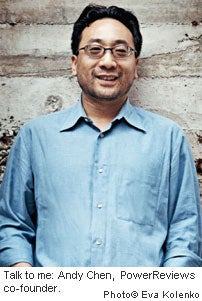 Andy Chen cares about what other people think. He is the co-founder of PowerReviews.com, which provides product- and service-review platforms and social commerce solutions to retailers and brand marketers. When someone likes or dislikes something, Chen wants to know--and so do the companies that use his platform, including Staples, REI, Drugstore.com and Toys "R" Us.

Chen and fellow founder Robert Chea came up with the idea of creating a review platform that companies could access in lieu of building, maintaining and moderating their own when they were working about 12 years ago on an online sporting goods retail site they co-founded. "We launched a customer-review feature on the site, and it was extremely popular," Chen says. "Customers liked it, and it was a very effective way for us to acquire customers."

He also saw the popularity and influence of reviews on sites such as Amazon and Zappos. So in 2005, the duo decided to create a company that would collect the review data and parse it several ways for the benefit of both customers and consumers. PowerReviews.com landed $7 million in Series A funding in December 2005 from Silicon Valley venture capital firms Menlo Ventures and Draper Richards, allowing the team to launch and begin building its infrastructure. One of PowerReviews' advantages is that it verifies many of its reviewers through a verified buyer process. This helps ensure that reviews aren't being flooded with biased accounts.

Their instincts were right on. A report from consulting company Deloitte this past April found that nearly two-thirds of customers read online reviews. And 43 percent either confirmed their decision or changed their minds based on the online reviews. But PowerReviews did more than just provide places for people to spout off. Chen and Chea built another site, Buzzillions.com, that aggregates the reviews from their 3,500 e-commerce sites into a single place, now housing more than 10 million reviews that visitors can access.

As the company grew over the next two years, it faced heated competition from other startups such as Bazaarvoice.com and Retrevo.com. In 2007, the team needed to fuel growth and turned once again to its partners in a $15 million Series B funding round led by Lehman Brothers Venture Partners. "We liked the idea. And we liked the team," says John Jarve, managing director of Menlo Ventures. "They're just a committed, fun group of people."

The second round established the firm's infrastructure and position in the marketplace. However, Chen knew that to grow, he would need to invest in a sales team. That would mean about $5 million to $6 million--too little of an ownership stake for most VCs to get newly involved. Could he go back to the well a third time?

The answer was yes and, in March, PowerReviews secured $6.1 million more from its existing investors. That money, Chen says, will be used to develop new products and to get new customers, primarily through hiring salespeople to hit the bricks and show companies what PowerReviews can do for them. The company had a small sales team of four people. Now there are 10, with possible plans to hire more.

"Sales is a profit-generating activity when it's done right," Chen says. "So there's an uncapped capacity to absorb more salespeople as long as they continue to sell."

In addition, the company will add more client support for its more than 900 customers and continue to expand the functionality of its platform. "This is a constantly changing world," Chen says. "We need to constantly innovate and improve and make our tools and technology different."