Coupons Get a Move On

Yowza!! matches merchants with customers on the go.

By Jason Ankeny
June 21, 2010
This story appears in the July 2010 issue of Entrepreneur. Subscribe » 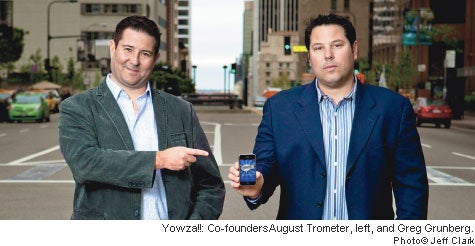 Now a television fixture thanks to subsequent roles in Alias and Heroes, Grunberg has another breakout hit to add to his résumé: Yowza!! , the mobile coupon solutions startup he founded with veteran software developer August Trometer. Already downloaded by more than a million iPhone and iPod touch users since launching in June 2009, the free GPS-based Yowza!! application identifies special offers and discounts within a consumer's immediate vicinity. Merchants work with the company to tailor deals, and cashiers redeem the Yowza!! barcode no differently than they would scan a traditional paper coupon.

Grunberg formulated the Yowza!! concept while shopping with his family. "We were in Bed, Bath & Beyond when I realized we forgot the coupon in the car--and the reason you shop in that store is so you can get 20 percent off," he says. "As I'm walking back to the car, I'm thinking, 'This sucks. There has to be a better way.' Everything just came together from there."

Grunberg connected with Trometer via Twitter, and together they created the Yowza!! app before ever meeting in the real world. "We agreed it has to be simple--it doesn't have to have bells and whistles and doesn't have to be complicated," Grunberg says. "If my mom cannot use this app on a daily basis to make her life better and easier, then it's not worth it."

Yowza!! is expanding its horizons beyond nationwide retail chains, introducing a self-serve sign-up option optimized for small, locally owned merchants. For $49 per location per month, retailers and restaurateurs can offer as many as three coupons at a time, creating new deals within minutes via the web. Because the Yowza!! app orders offers in direct relation to user proximity, there's no preferential treatment afforded to larger companies. And to sweeten the deal, Yowza!! also supplies a welcome packet including decals to alert consumers that mobile coupons are accepted, as well as a training guide for staffers.

"Yowza!! is so inexpensive compared to what retailers are doing now," Trometer says. "They're paying newspapers lots of money to reach a lot of people who will never see their ad or clip it out. We allow merchants to market to people who are already nearby--people with money in their hands who are looking to spend it."

Next up: A Yowza!! affiliate program encouraging users to sign up local businesses, awarding them a 25 percent commission based on the business's monthly sign-up fee on all referrals for the first year of the account.

"We look at Yowza!! as more of an advertising platform than just an application," Grunberg says. "It's all about helping and rewarding the retailer, and getting people back into stores." Sounds much more appealing than Smoothaise.