Foursquare, Watch Your Back

Gowalla is erasing the line separating the real world from its virtual counterpart.

By Jason Ankeny
June 21, 2010
This story appears in the July 2010 issue of Entrepreneur. Subscribe » 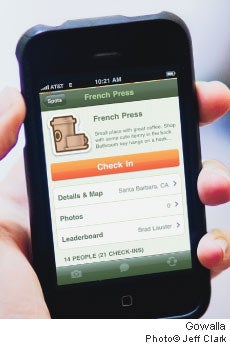 Gowalla is equal parts personal scrapbook, travel guide and geo-specific social network. Like archrival Foursquare, Gowalla lets consumers check in at restaurants, bars and related points of interest worldwide via GPS-enabled mobile devices. Users can recommend locations to friends, share photos and notes on their experience and even earn passport-inspired "stamps" and digital rewards for their efforts.

"Gowalla is about recording and sharing favorite places with friends, and the social status that comes along with that," says CEO Josh Williams. So far, the Austin, Texas, company has raised nearly $11 million in venture financing. "We're tapping into a basic human desire to associate with a sense of place."

A growing number of people believes Gowalla is the place to be: As of April, more than 250,000 "Gowalla Passport Holders" from 170 countries had checked in, and usage is increasing by more than 60 percent every month, Williams says.

"Our core group of users isn't just hipsters and Silicon Valley types. We also have a significant number of moms going out on the weekends and sharing information on their favorite parks," Williams says. "We want Gowalla to provide a rewarding, fun and entertaining experience that encourages users to explore the world around them."

DOWNLOAD
The Gowalla app is optimized for most major smartphone platforms, including Apple's iPhone, Google's Android, Research In Motion's BlackBerry and Palm's webOS. Gowalla has also expanded to Apple's iPad.

FOLLOW
Gowalla constantly updates the whereabouts and activities of users as they check in at destinations ranging from trendy nightclubs to salons to fast-food franchises. If it's open, chances are a Gowalla user is there.

PROMOTE
The site generates revenue via sponsorship deals with brands such as Chevrolet and fast-food chain Chipotle. Merchants are reaping the benefits: When One Taco, in Austin, Texas, advertised free tacos, it sold 12 for every one it gave away.