By Gwen Moran
August 26, 2012
This story appears in the August 2012 issue of Entrepreneur. Subscribe »
By the Numbers
40 million Americans went camping in 2010.

1 billion tons of carbon dioxide is emitted annually into the atmosphere from open fires.

Product designers and avid campers Alec Drummond and Jonathan Cedar were on a mission to develop a better campsite stove--one that would cause less environmental damage than petroleum-based or battery-powered options, not to mention traditional campfires.

With the blessing of their then-employer, New York-based consultancy Smart Design, the duo spent nights and weekends using the firm's resources to develop the BioLite CampStove. Requiring half the wood of an open fire, the CampStove reduces emissions by more than 95 percent and--as a nice bonus for modern campers--can charge cell phones and other electronics. The $129 stoves began shipping in May.

But Drummond and Cedar have found another use for their technology. When their prototype won the top prize from collaborative research group ETHOS for low-emission design, they realized they might have a solution to a major global health issue.

An estimated 2 million people die annually from the effects of smoke from indoor fires used for cooking and heat. Drummond and Cedar figured that if they could develop a larger stove for home use, it could be a force in reducing air pollution, as well as deforestation.

Rather than a charitable model based on fundraising, the founders--joined in 2009 by a third partner, Jonathan den Hartog--wanted to develop a market-based solution that would help even the poorest people buy the product, which they dubbed the BioLite HomeStove. 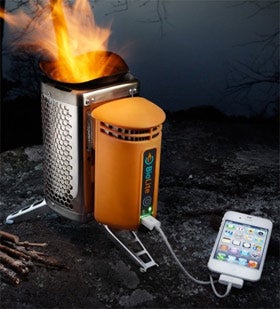 In April 2011, BioLite closed on $1.8 million in Series A funding led by the Disruptive Innovation Fund; the team also secured about $100,000 from sustainable technology awards, including prizes from Scotland's University of St. Andrews and energy giant ConocoPhillips.

The funds have been used for product development and early-stage testing of HomeStoves in India, Ghana, Uganda and Guatemala. Those tests will expand into a large-scale pilot program that continues into 2013. One major project will be a 2,000-home trial in Ghana, funded by the National Institutes of Health, in partnership with Columbia University's Mailman School of Public Health and the Ghanaian government, to show the long-term positive impact the stoves can have on newborns' health. Such rigorous trials are necessary to get government support in the form of reduced tariffs, subsidies and public education programs.

"Women who used the stoves [in trials] immediately realized the "smokelessness' and asked us, "Where did you put the smoke?' Men were interested in the electricity," Cedar says. "From surveys we've done, we see that people in these regions want to buy the stove."

Getting the word out in remote regions will require creativity: BioLite is developing promotional strategies such as painting wall murals, training door-to-door sales agents and conducting public demonstrations. The company is also testing price points--$40 is the goal--and is considering developing microfinancing models.

Entrepreneurial ventures in low-income regions are no different than they are anywhere else, Cedar says: "It's like any other market--bring your best and find ways to communicate and solve challenges."