What Does Occupy Wall Street Mean for Your Business?

Entrepreneurs may want to consider whether these gatherings are business signals about present or future customers, employees and economic policies.
Next Article

The Occupy Wall Street movement, in its third week in Manhattan, is cropping up in cities from Los Angeles to Chicago, spawning similar demonstrations against corporations, political corruption, economic inequality and a host of other issues.

Whether the grass-roots movement will affect Main Street businesses eventually is impossible to know. In New York, demonstrators often appear to have no clear message as they gather around pizza boxes, huddle in sleeping bags or dress up as what they call "corporate zombies." Early reports indicate that rallies in other cities are equally loosely focused.

But the gatherings, which generally reflect the discontent among many Americans, particularly the unemployed, may pick up speed thanks to social media such as Twitter and Facebook and mainstream media exposure.

The implications for business owners could be far-ranging. Potential customers or employees may be among the crowds sounding off on their disparate talking points. As the 2012 election season gears up, politicians may seek to capitalize on the sentiments voiced at the demonstration, from raising taxes on the wealthy to limiting the power of the Federal Reserve. And some corporations, including those drawing protesters’ ire, may simply use the attacks as an opportunity to adjust their marketing to the zeitgeist.

Facebook Poll: As a business owner, do you support Occupy Wall Street?

Here's a sampling of what’s happening at the Occupy Wall Street in New York. 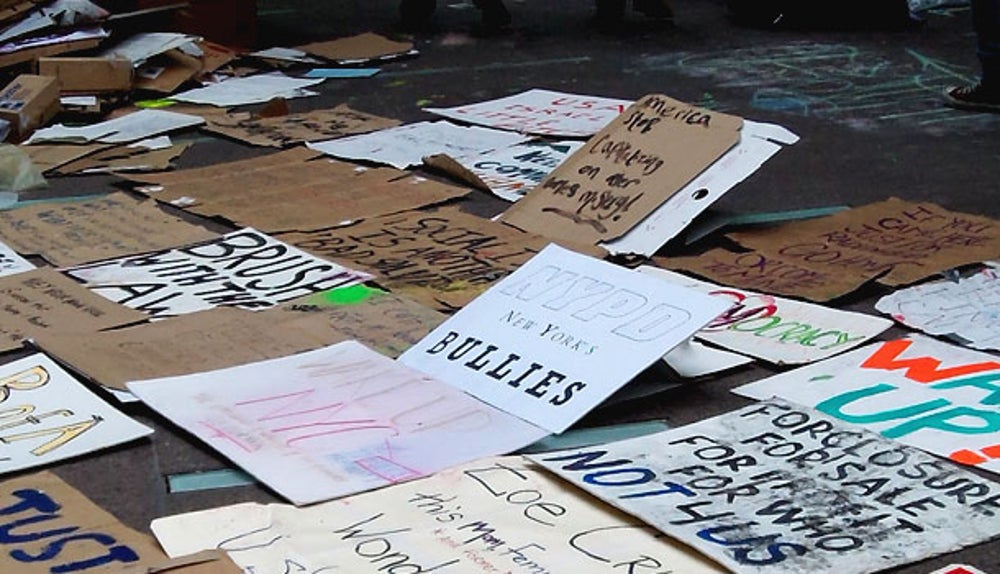 Signs spill onto the sidewalk, some written in paint on the back of pizza boxes. Messages include "Capitalism is self-destructing," "Socialism is another bad solution" and a plea to the largest corporations on earth to "Stop Spending -- Start Sharing." 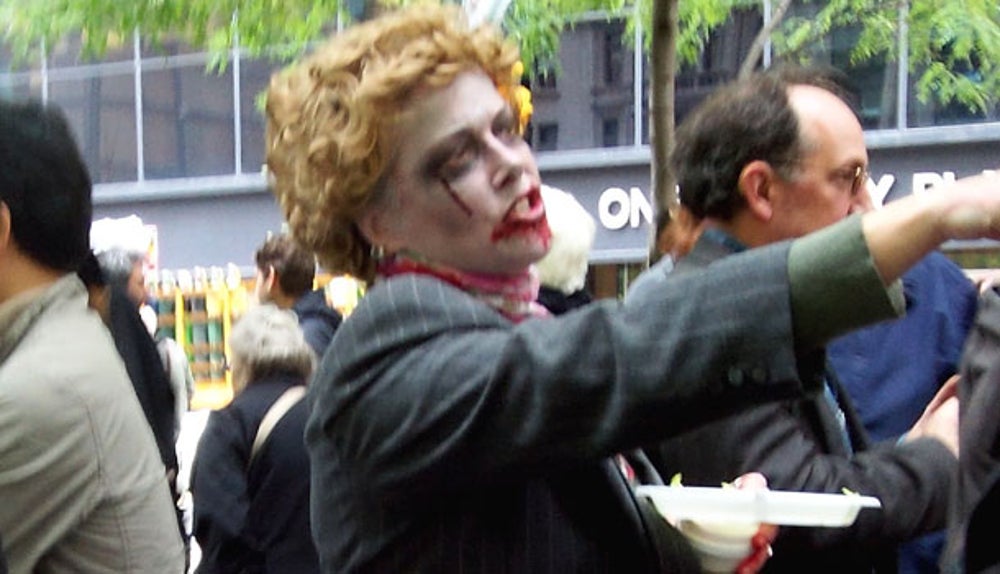 Protesters on Monday dressed as what they called "corporate zombies," some in suits and white facepaint, to protest what they view as big-business greed. 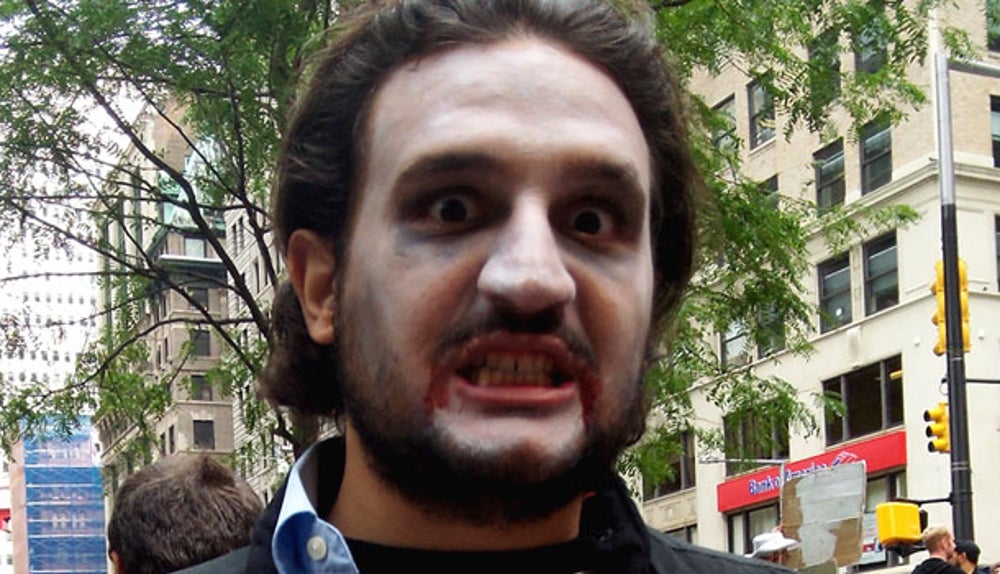 One "zombie" described himself as an unemployed teacher from Staten Island, N.Y. He says he hasn't had a full-time job in over a year, despite experience and education. "The system, as is, is not meant to reward those who struggle and work hard," he says. 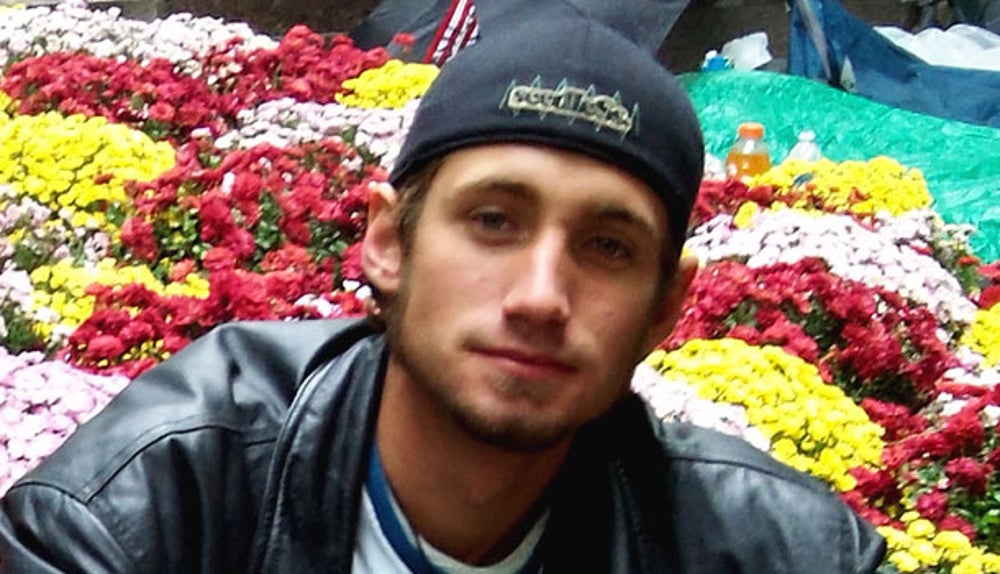 "I'd like to see more jobs," says protestor Ashton Phillips. A tile setter and carpenter by trade, Phillips says he was laid off from a pizza shop in Gouverneur, N.Y., three weeks ago. He's upset that "the richest men and women pay the same taxes we do" and big businesses like Wal-Mart have pushed smaller stores out of business. "It's hard to feed your kids, pay your gas bills," he says. "We want change." 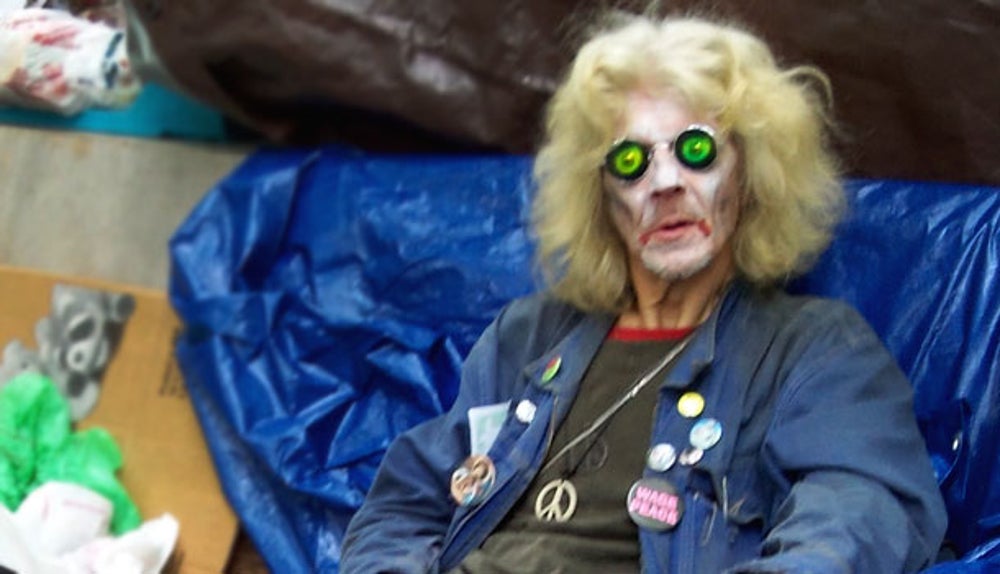 Not all protesters were up in arms against big business. Some were protesting the wars in Afghanistan and Iraq, or generally championing the peace movement. "I have nothing to do with corporate," say this protester, who wore buttons saying "Wage Peace" and similar messages. "I just drink the water sometimes." 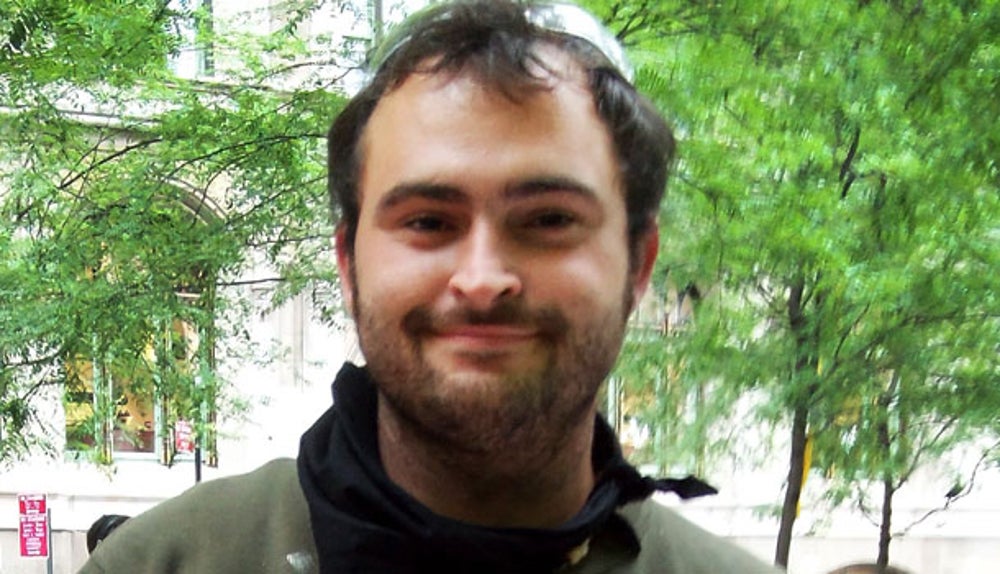 Thomas Flessas, an independent organic farmer from Dade City, Fla., and a peace activist, says he travelled up the East Coast from Florida, stopping in various cities along the way to rally other protesters to come along. "I see this as an opportunity to create a new way of doing things," he says. 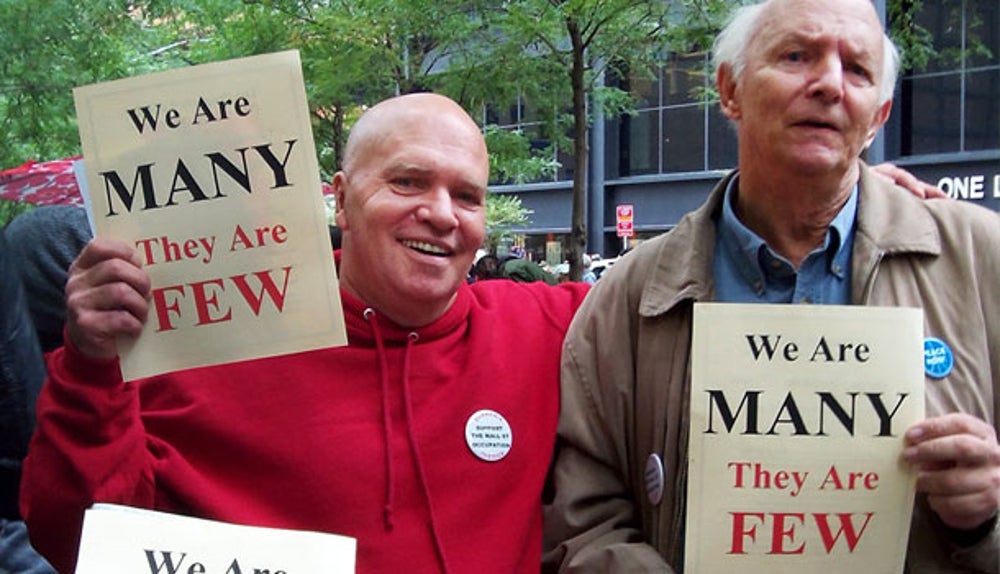 Frank Broadhead of Hastings-on-Hudson, N.Y., pictured right, says he has been attending protests for 50 years, such as those organized by the civil-rights and anti-war movements, and thinks this one is "fabulous." Broadhead passed out a sheet with 21 items that the "Occupy Wall Street" movement is protesting, including executive bonuses, unsafe work conditions, low wages and outsourced labor that has contributed to reductions in health-care benefits and pay for U.S. workers. "Our problems are very comprehensive," he said. 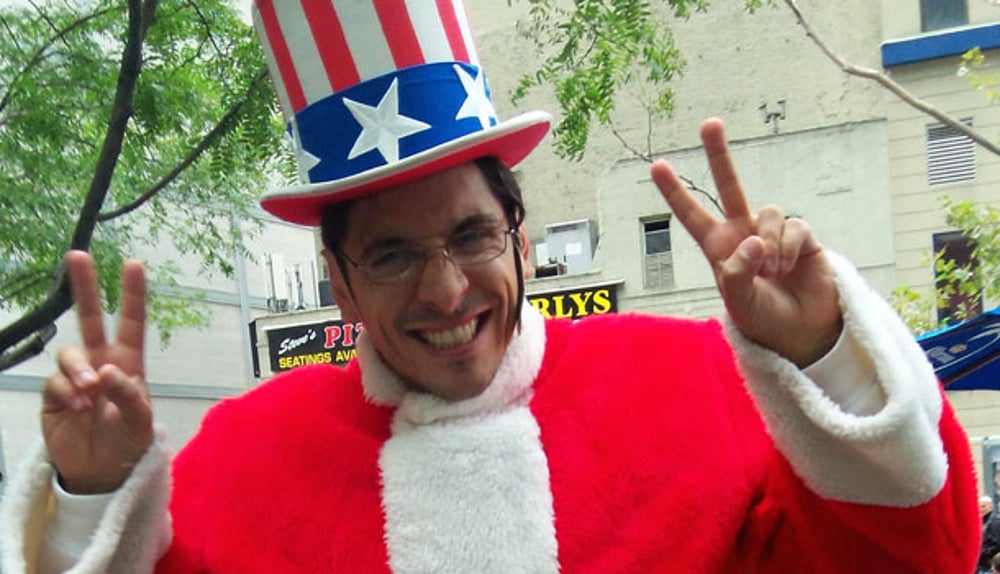 Ariel Shafir of New York, who was dressed as a combination of Uncle Sam and Santa Claus, says he is working on a film about what he called the U.S.'s system of "cloaked" fascism. He's protesting that the U.S., in his view, has become a place where "you want to socialize the debt and privatize the profits." 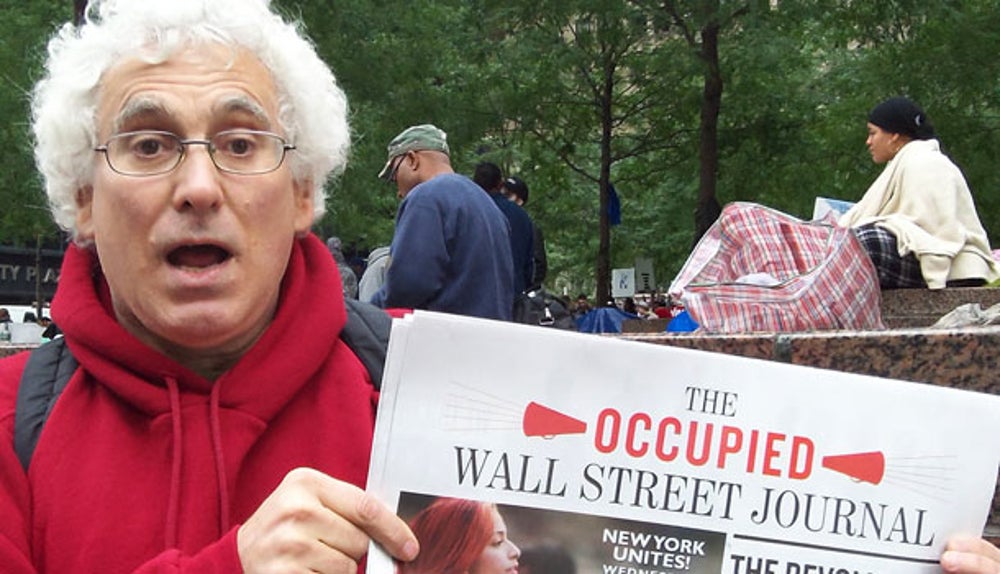 Read all about it! Michael Korn of Brooklyn, N.Y., volunteered to hand out a paper called "The Occupied Wall Street Journal," published by protesters. He's upset that some financial institutions bet against the housing market and made money through what he described as "casino" capitalism. "It's running amok and not giving us what we want," he says. "You have to have room for innovation, but give people the basics so they can have a half-way decent existence." 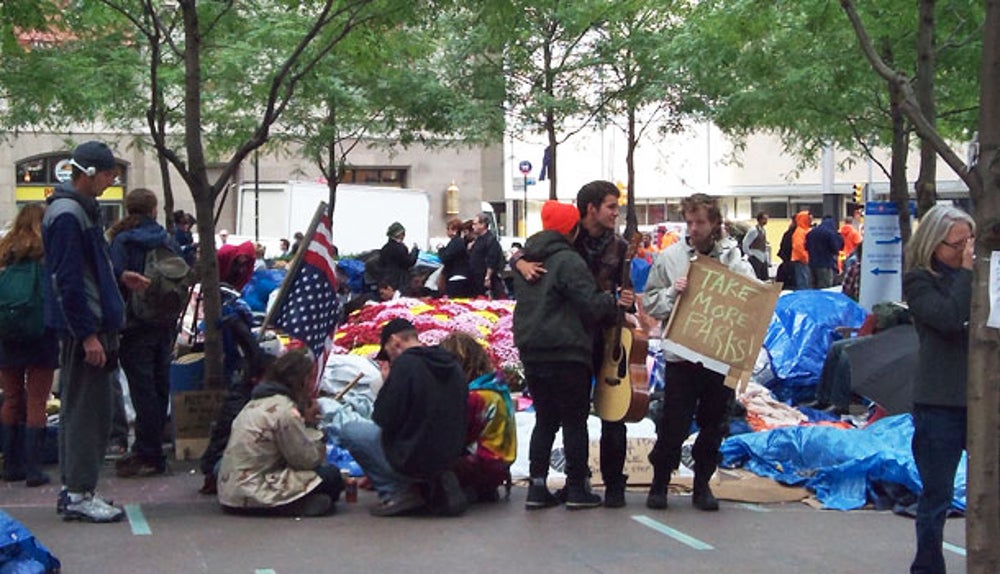 Protesters carry a sign urging others to "take more parks." Nearby, another sign claimed that the Occupy Wall Street protest has moved to 116 U.S. cities and 28 outside the U.S.