Game On for Pizza Franchises

Sarah Max
February 2, 2012 9 min read
Opinions expressed by Entrepreneur contributors are their own. Forget football. Food will also be front and center this Super Bowl Sunday -- the second biggest eating holiday of the year second only to Thanksgiving. And while chicken wings, chips and dip are game-day favorites, pizza is always in hot demand. In a survey by the National Restaurant Association, 61% of people said pizza was a "must have" item for the big event.

"It's the ultimate fun party food," says Brandon Gorin, owner of two Marco's Pizza franchises near Indianapolis. He should know. Prior to opening his stores last year, Gorin was an offensive tackle in the National Football League and took home two Super Bowl rings with the New England Patriots. "We're gearing up for a very big night," he says.

In fact, the Super Bowl is the biggest day of the year for most pizza franchises. Domino's, for example, expects to sell more than 11 million slices of pizza -- 80% more than a typical Sunday. Papa John's, which is the official pizza of this year's bowl, will give out free pizza and Pepsi to its rewards members if online voters successfully predict which team will win the coin toss.

Of course, pizza's appeal isn't just during football season. Overall, "these concepts are doing very well," says Keith Hudson, president and CEO of Charter Franchise Group, a Houston franchise consultancy, adding that pizza's low cost has worked in its favor in the post-recession years. Meanwhile, the top pizza chains have improved their game plans with streamlined ordering and efficient delivery systems, he adds.

Still, would-be franchisees need to tread carefully in this crowded category, starting by knowing what concepts will work best in their markets, whether it's delivery, take-out, buffet or a full-service restaurant. One thing to watch out for is excessive couponing. "If you're constantly having to get people in the door with coupons, it's a money loser," says Hudson.

Likewise, too many exotic toppings can eat into the bottom line. "The pizza concepts that have done best are the ones that don't get into too many high-end ingredients," he says.

Related: How to Avoid a Franchise Fad

Prior to buying his franchises Gorin looked at everything from self-serve yogurt and gourmet burgers to kids' bounce houses, but was most impressed with Marco's menu, marketing and growth potential. "I wanted to use something where my football background would lend some advantage," says Gorin. "Pizza seemed like a great fit."

Here are the top 10 pizza chains from Entrepreneur's Franchise 500 list, as measured by such factors as financial strength and stability, growth rate, breadth, experience and startup costs. 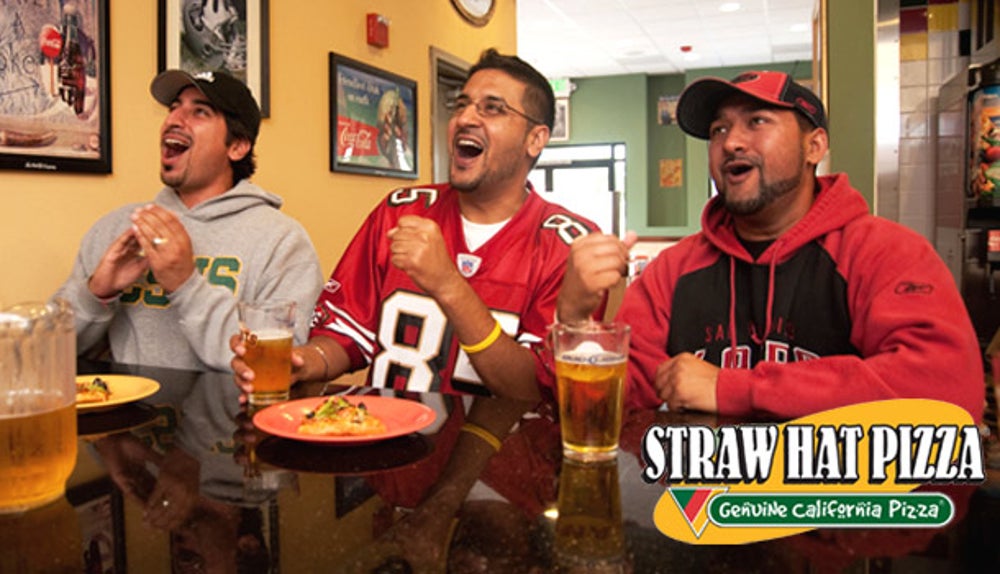 In 1959, decades before buying local was all the rage and California Pizza Kitchen was a household name, a pizza joint in San Leandro, Calif., rolled out its flaky crust, fresh tomato sauce and naturally aged cheeses. Straw Hat's California-style pizza was a huge hit, and quickly grew to be one of the largest pizza chains on the West Coast. In the late 1980s Pizza Hut bought the franchise operation and most of the franchises but some Straw Hat franchisees didn't sell. They joined forces and held onto the concept of using fresh, local ingredients, ultimately franchising again in late 2009. In fewer than two years some two dozen franchises have opened in Arkansas, Montana, Nevada and Texas. 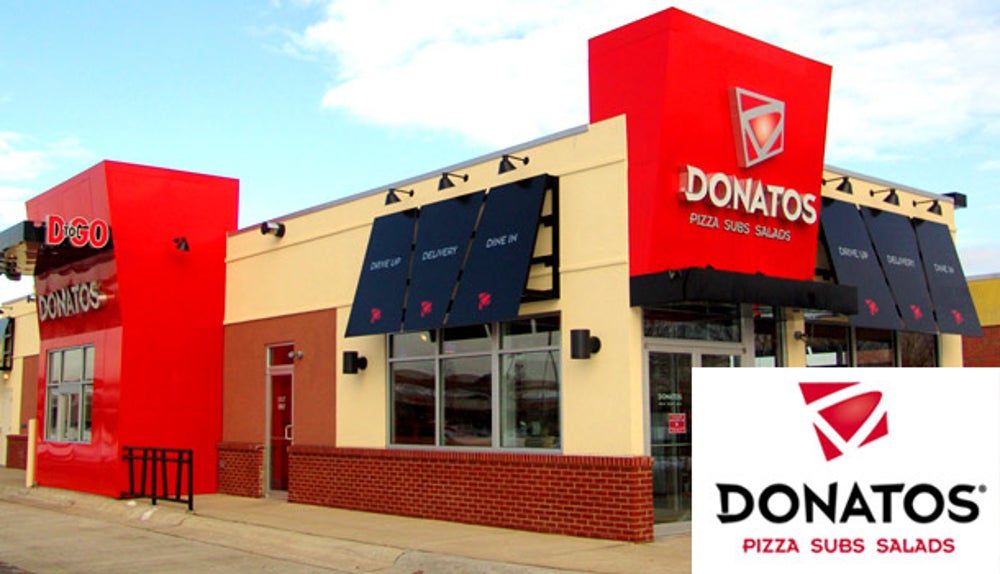 No matter how you slice it, the Super Bowl is a big event for this proprietor of pizza, subs, salads and wings. Sunday's game, in fact, will be the culmination of the chain's aggressive marketing campaign promoting its pizza and wing bundles. Donatos debuted its crispy thin crust in 1963 when Jim Grote, then a sophomore at Ohio State University, opened his Columbus pizza joint with $1,300 in his pocket and the goal of bringing real Italian pizza to the Midwest. McDonald's bought the franchise company in 1999, but four years later Grote and his daughter, Jane, bought it back. Today, Donatos offers franchisees a time-tested product and flexible real estate strategy. 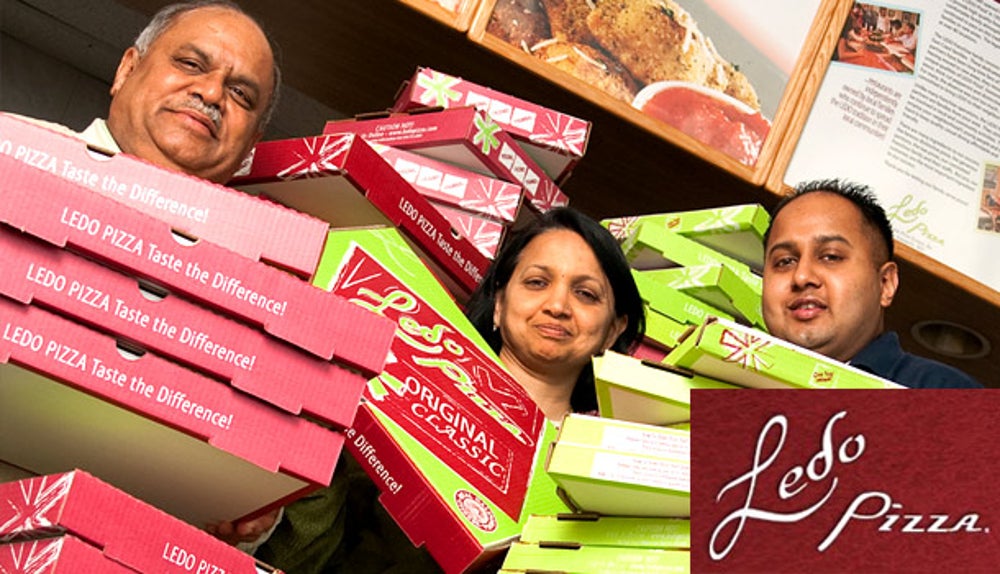 With its rectangular pans and thick pepperoni, Ledo Pizza opened its doors in 1955 and quickly became an Annapolis institution among politicians, athletes and university students. In 1989 the company began franchising, making Ledo Pizza a household name in Maryland and other Mid-Atlantic states. The menu goes beyond pizza to include lasagna, spaghetti, soup, salad and subs. One thing Ledo Pizza doesn’t offer: Delivery. It does, however, let customers order half-baked pizzas to heat and enjoy at home. 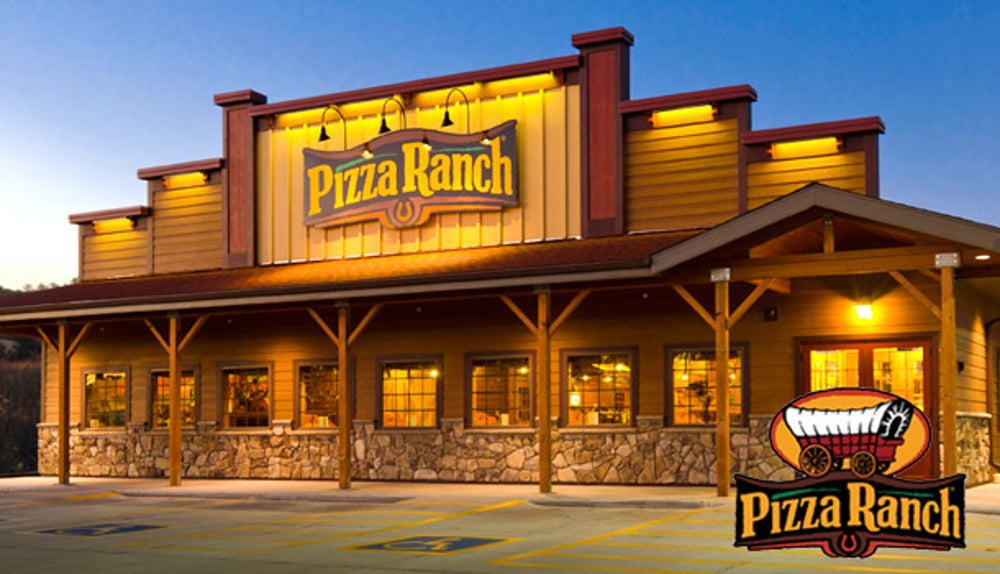 Americans may be minding their budgets, but that doesn't mean they've given up going out altogether. That's good news for family restaurants like Pizza Ranch, which saw its sales volume increase more than 19% in 2011; average unit growth was close to 14%. The concept started in 1981 when a young Iowan, Adrie Groeneweg, started selling homemade pizza using recipes developed by his mom. Today, Pizza Ranch's stand-alone restaurants seat more than 200 people, and offer diners a "mile-long" buffet of pizza, chicken and dessert in a cozy western setting; take-out and delivery are also an option. The concept has caught on, making Pizza Ranch one of the largest regional chains in Iowa, Minnesota, North Dakota and South Dakota. 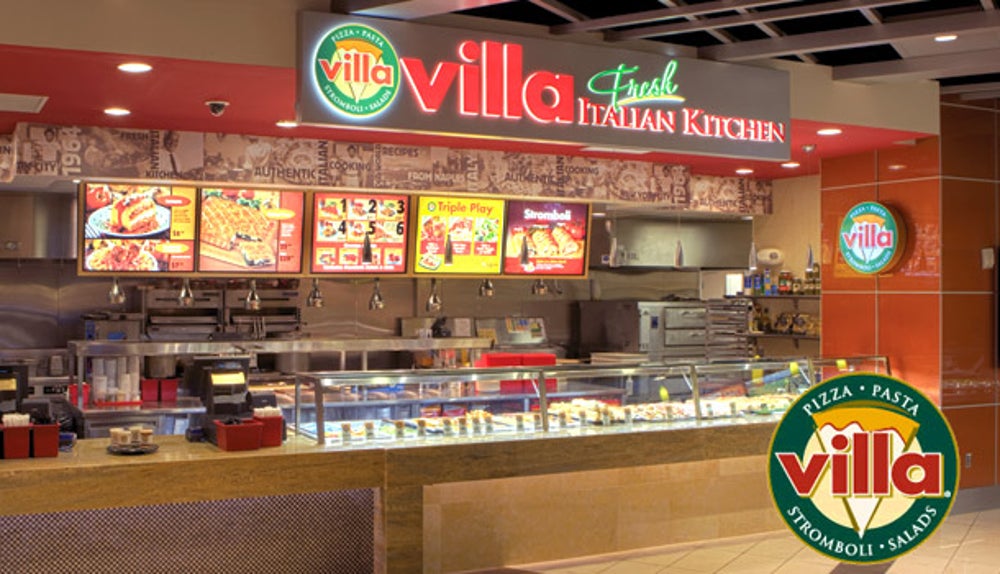 You wouldn't expect an American pizza franchise to make inroads in Italy. Yet in 1996, Villa Fresh Italian Kitchen managed to do just when it opened a franchise in Naples, the birthplace of pizza. It wasn't such a stretch, considering that when Villa founder and Neapolitan Michele Scotto opened his pizzeria in New York City in 1964 he used recipes he brought with him from the Old Country. In the nearly five decades since, the company has introduced other Italian fare developed by its culinary team in a state-of-the-art test kitchen. But the pizza is still just like Scotto used to make. 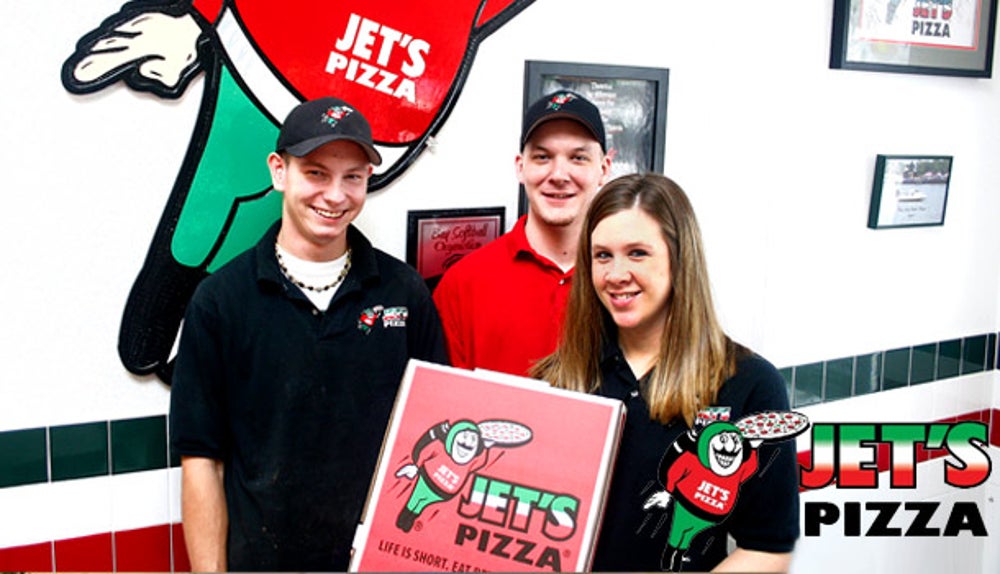 Though best known for its signature deep-dish square pizza, Jet's Pizza has also won over customers with its submarine sandwiches, salads, breadsticks and wings. Founded by Eugene and John Jett in 1978, Jet's started franchising in 1990 and has since grown to more than 200 franchises in more than a dozen states. The company gives its franchisees strict guidelines and "tasty" secrets to make sure every order is fresh, delicious and consistent. 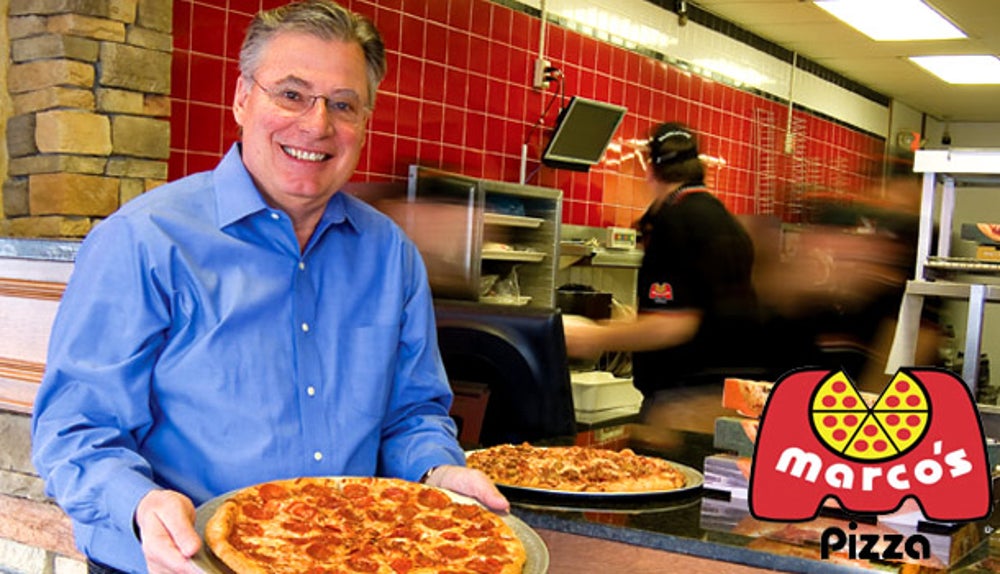 Marco's Pizza was founded in Toledo, Ohio, in 1978 by Pasquale "Pat" Giammarco, from Italy, who wanted to create an authentic Italian pizza chain. The company sold its first franchise a year later, reached 100 stores by 1994 and in 2004 changed hands. Under new ownership the company has thrived – but Pat's secret sauce and fresh-made dough remains constant. In 2011, Marco's Pizza opened 61 locations, and more than 100 stores are slated to open in the 2012 fiscal year. Same store sales, meanwhile, were up about 7.5% in 2011. 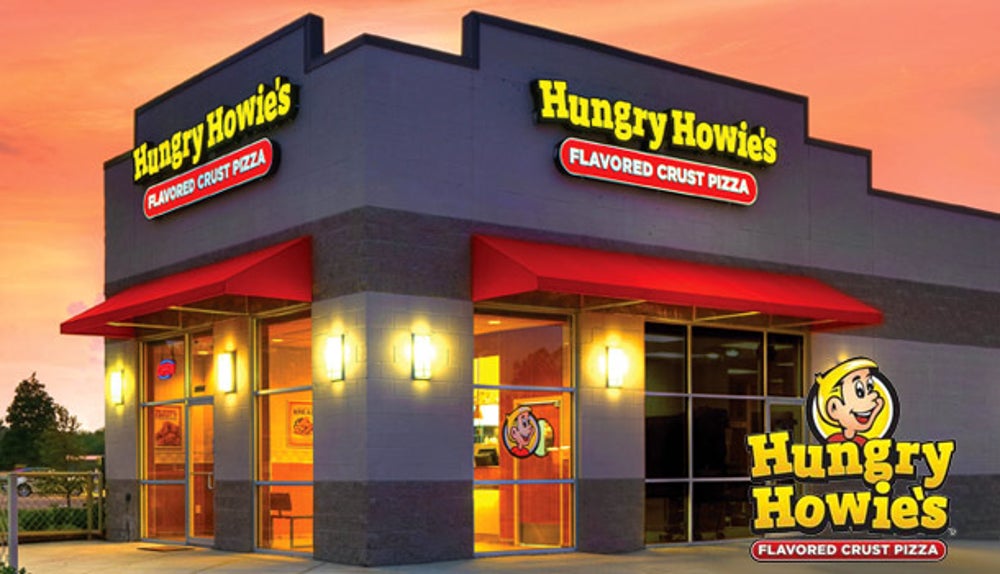 Hungry Howie’s got its start nearly four decades ago in a converted hamburger shop in Taylor, Mich. The market was indeed hungry. By 1985, just three years after the company started its franchise operations, it had more than 65 locations; in 2005 it reached 500. Although franchise growth has slowed a bit, same-store sales remain hearty – up 7.7% in 2011. Flavored crusts are a big part of Hungry Howie’s lure. Customers can choose from eight different tastes, including garlic herb, onion, sesame, ranch and Cajun. 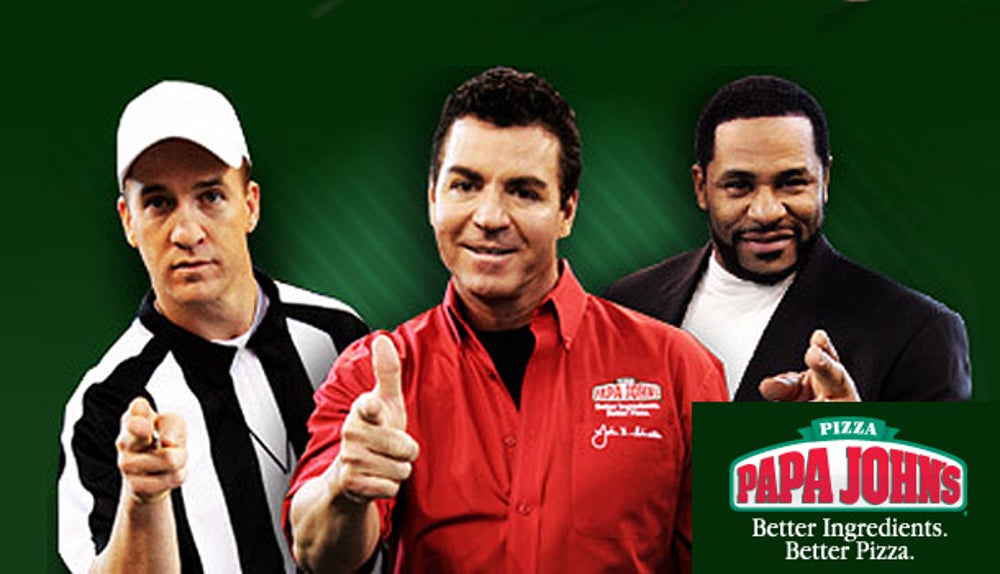 Papa John's early history reads like many pizza franchises: A young John Schnatter figures he can make a better pizza and begins delivering pies from a glorified broom closet in his father's Jeffersonville, Ind., bar. Yet somewhere along the way, Papa John's, which is now publicly traded, entered the big leagues. The brand boasts 3,900 locations globally and is slated to reach 4,000 by the middle of this year. Would-be franchisees are drawn to such incentives as no franchise fee, up to $50,000 in free equipment, a $3,000 food service credit and an initial break from paying royalties. Pizza customers, meanwhile, enjoy a system-wide rewards program that will give Papa Rewards members a free pizza if America correctly calls the coin toss on Feb. 5. 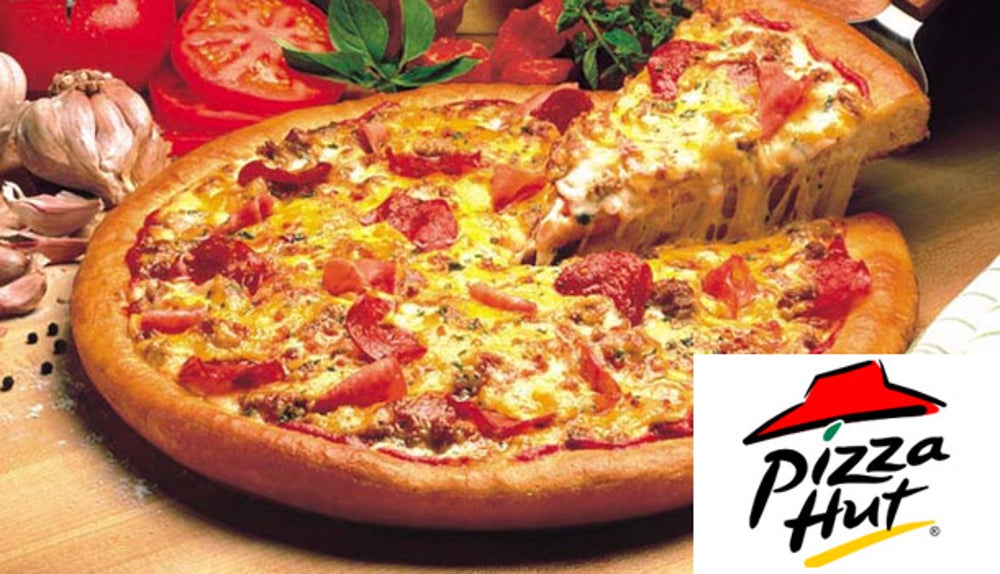 Pizza Hut, which is owned by publicly-traded Yum! Brands, is an old hat among national pizza chains, but in recent years it's undergone some notable improvements. It shed its pricy image with $10 any-topping large pizzas, introduced chicken wings to its menu, and improved its online order and delivery system. Moreover, it ramped up growth of smaller stores focused on carry-out and delivery making Pizza Hut stores a viable option in more markets. While the company is one of the biggest of the bunch, with thousands of franchises around the world, just 148 franchisees own units of this iconic brand.