Submit your email to get a sneak peek of some of the fun, educational worksheets included in our NEW book for the little entrepreneur in your life.
Lauren Lyons Cole
August 14, 2017 5 min read
This story originally appeared on Business Insider


Bill Gates, Warren Buffett and Jeff Bezos may be the richest men in the world, but they aren't the only billionaires.

There are 2,043 people across the globe with three commas in their net worths, according to the 2017 Forbes Billionaires list. The 23 wealthiest have $1 trillion collectively.

In 2017, 10 of the world's billionaires -- fewer than 1 percent -- are black, down from 12 last year, reports Forbes contributor Mfonobong Nsehe. Three of the 10 are women. All but one, Isabel Dos Santos, are billed by Forbes as self-made.

To compile the full list, Forbes uses stock prices and exchange rates to estimate the net worths of the world's richest people, and then ranks them based on their wealth. This year's list was created using data from Feb.17, 2017, but Forbes also maintains a current snapshot of the world's billionaires, updated daily.

Continue reading to see the richest 10 black billionaires in the world, according to the 2017 Forbes Billionaires list. 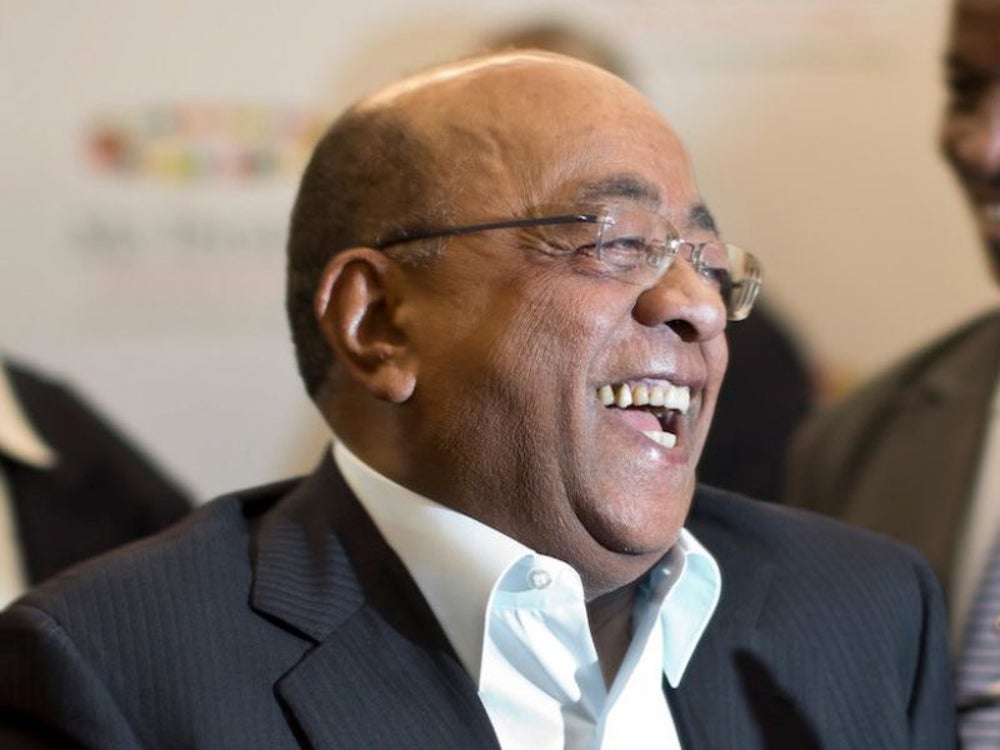 Image credit: Ben Curtis/AP
Self-made billionaire 71-year-old Mohammed Ibrahim was born in Sudan and now lives in the United Kingdom, where he is the 11th wealthiest citizen. Ibrahim became a billionaire after selling his telecommunications company, Celtel International, in 2005, according to Forbes. Now he spends much of his time focusing on improving the lives of African citizens through the Mo Ibrahim Foundation. 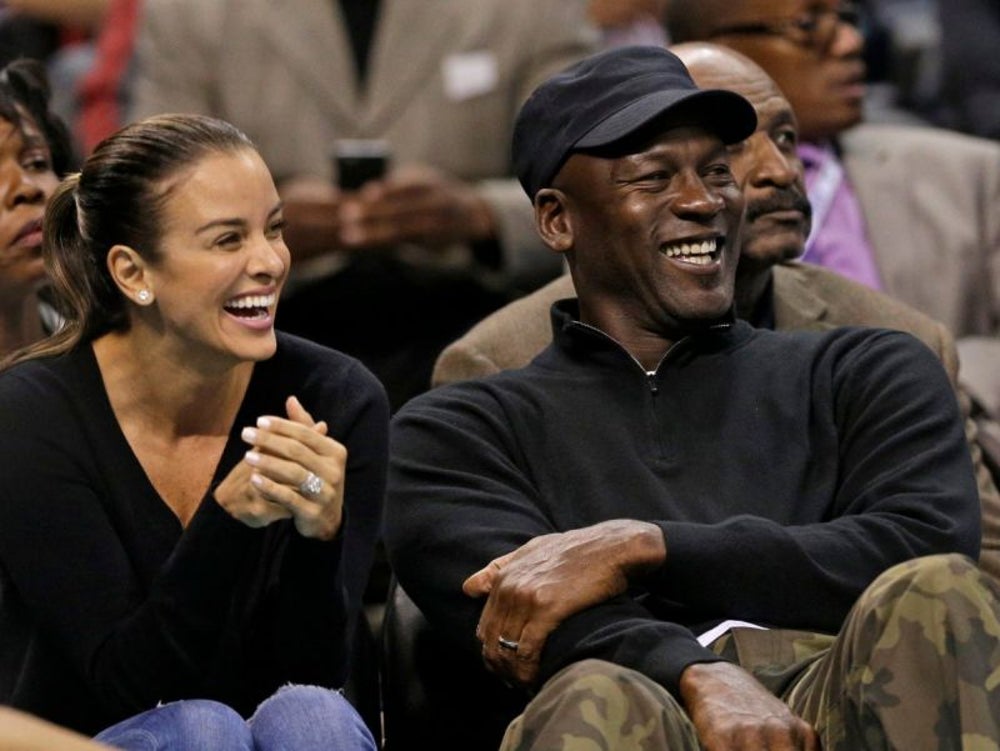 Yvette Prieto and Michael Jordan.
Image credit: Chuck Burton/AP
One of the most successful athletes of all time, Michael Jordan, 54, made a total of $90 million as a basketball player, according to Forbes. Since retiring from the NBA, he has amassed the majority of his wealth through his relationship with Nike and other corporate partnerships. Jordan, who also owns a stake in the Charlotte Hornets, now makes more in one year than he did during his entire professional basketball career, as Business Insider's Cork Gaines reported. 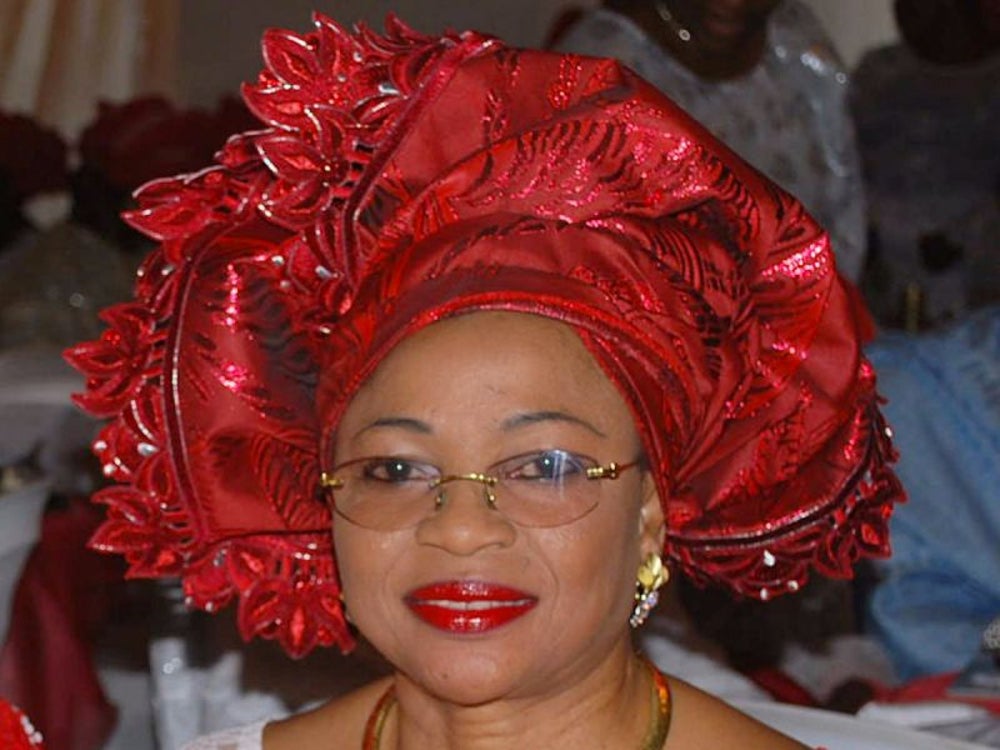 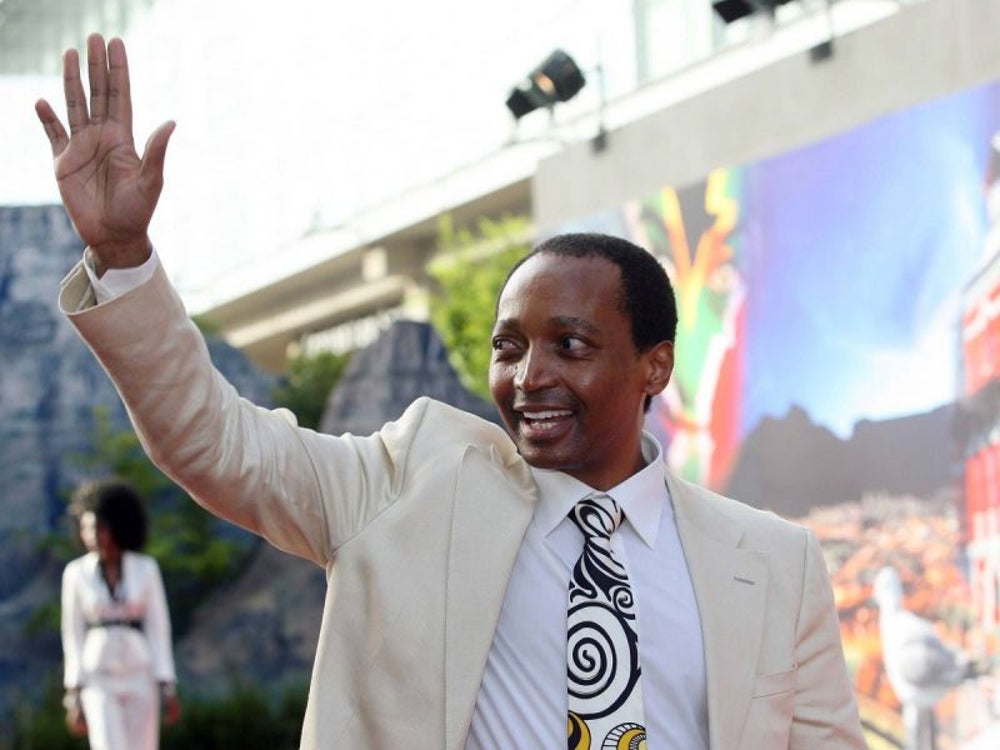 Image credit: Getty/Handout
South-African Patrice Motsepe, 55, founder of the mining company African Rainbow Minerals, was Africa's first black billionaire. The father of three was also the first African to sign Bill Gates's Giving Pledge, promising to donate at least half of his wealth to charity. Motsepe and his wife Precious created the Motsepe Foundation in 1999 to help create new jobs, support education and improve the lives of children, the unemployed and the disabled, among others. 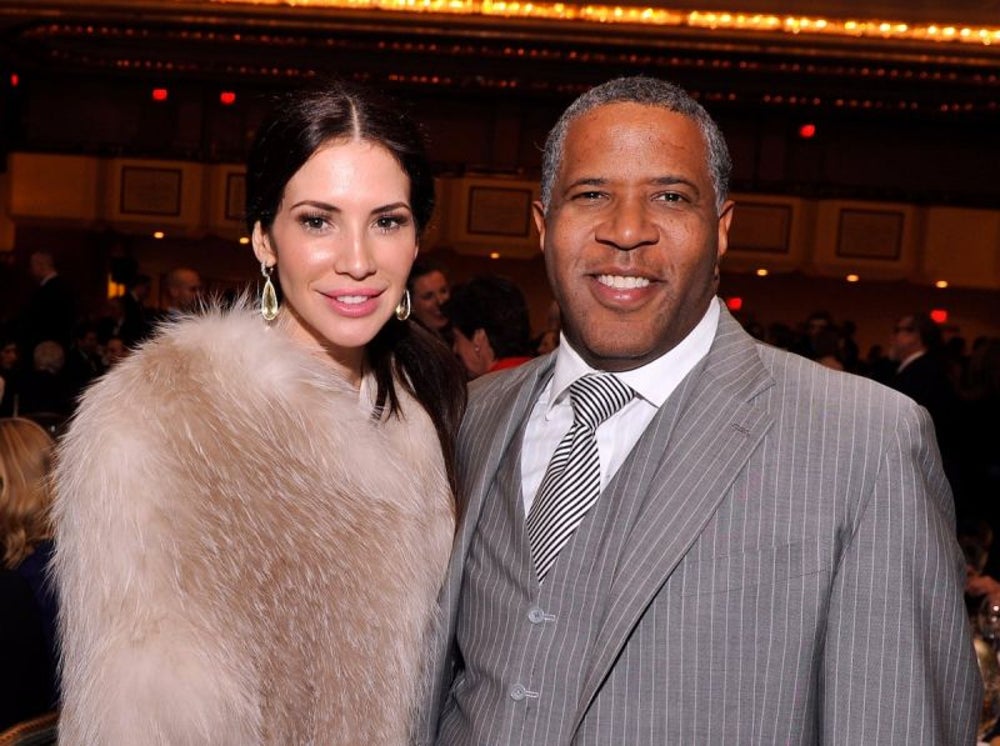 Hope Dworaczyk and Robert Smith.
Image credit: Stephen Lovekin/Getty
When Robert Smith, 54, left Goldman Sachs in 2000 to start his own private equity firm, Vista Equity Partners, his co-workers thought he was crazy. But since then, his success and wealth has sky-rocketed, landing him on the Forbes Billionaire list for the first time in 2016. In 2015, Smith wed Hope Dworaczyk, a former Playboy playmate and mother of his young son in an incredible villa on the Amalfi Coast in Italy. The private-equity titan, who resides in Austin, Texas, added his name to the Giving Pledge earlier this year. 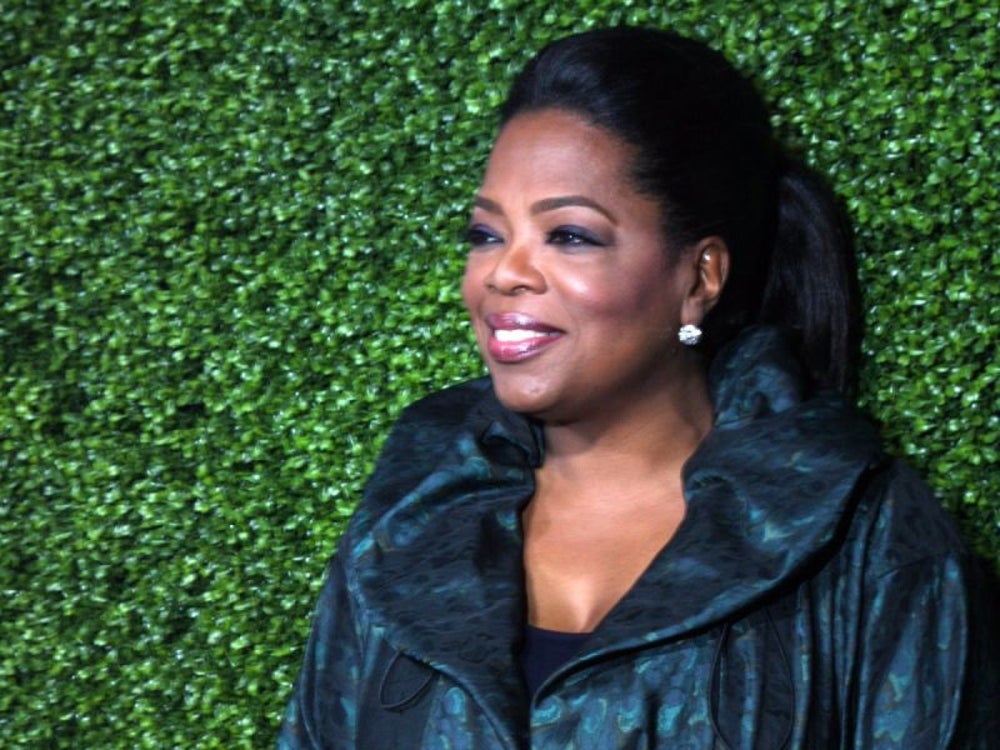 Image credit: Joe Seer | Shutterstock
Oprah Winfrey, 63, is the only African-American woman to make the Forbes billionaire list. Winfrey overcame a tough childhood to become the well-known and beloved media mogul she is today. While generous with her wealth, Winfrey still maintains an enviable lifestyle. Earlier this year, Winfrey delivered the commencement address at Smith College, telling graduates the secret to success is serving others. 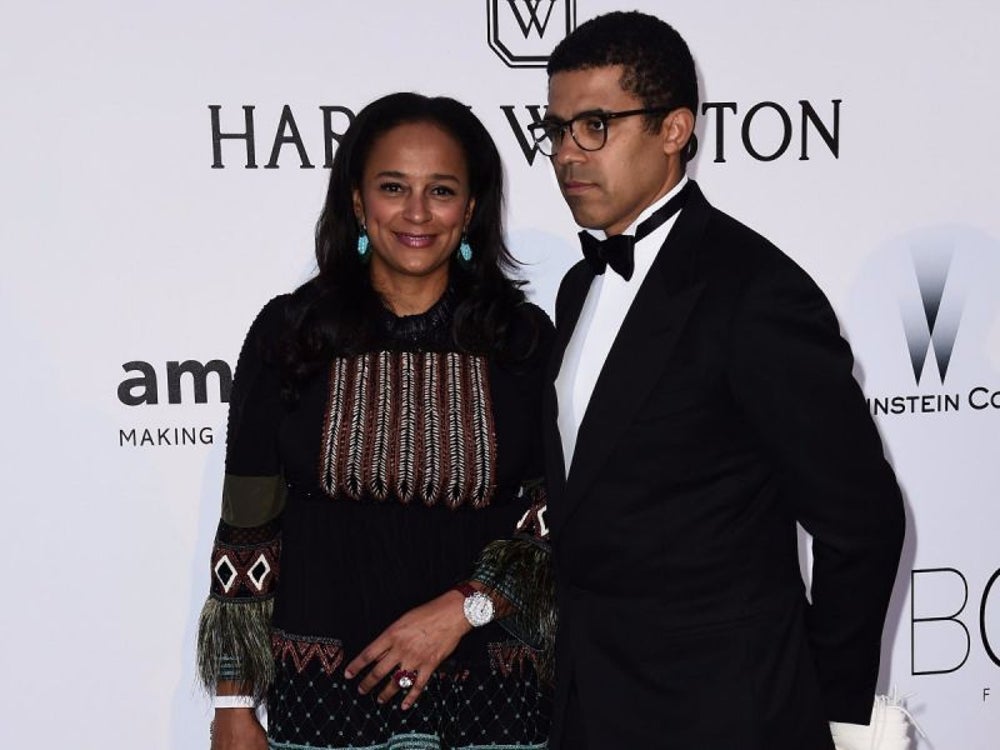 Isabel Dos Santos and Sindika Dokolo.
Image credit: Ian Gavan | Getty
The wealthiest of the three woman to make this list, and the youngest black billionaire in the world, 44 year-old Isabel Dos Santos is the daughter of Jose Eduardo dos Santos, who has been president of Angola since 1979. Her fortune comes from multiple investments, many of which are controversial and linked to her father, according to Forbes, although Dos Santos maintains her investments are private and independent. 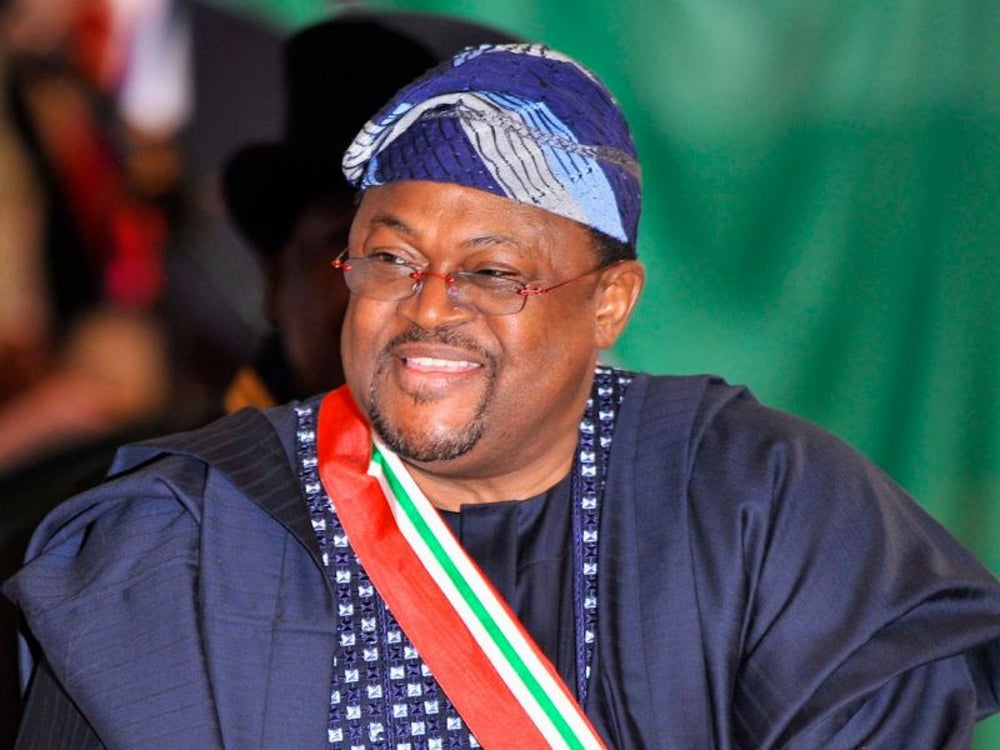 Image credit: Afolabi Sotunde/Reuters
Nigerian Mike Adenuga, 64, is chairman of telecommunications company Globacom, which has 36 million subscribers, as well as the majority owner of Lagos-based oil company Conoil, according to Bloomberg. While earning an MBA from Pace University in New York, he drove a taxi to pay the bills. Today, Adenuga, who has seven children, is the second-wealthiest man in Nigeria, according to Forbes. 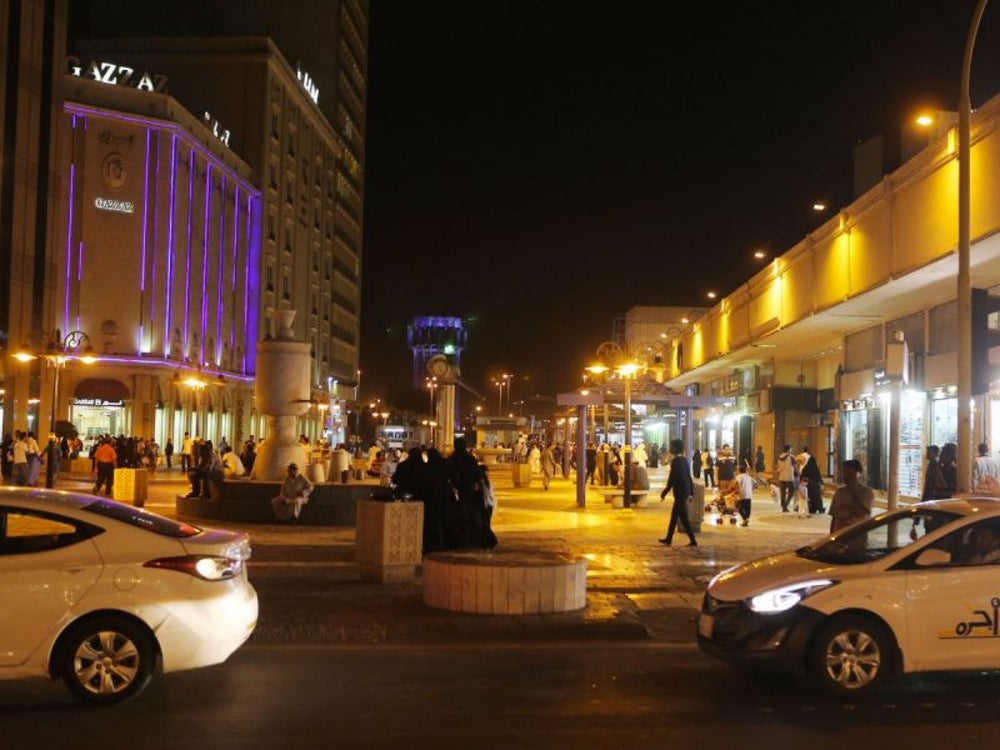 Mohammed Al Amoudi (not pictured) lives in Jeddah, Saudi Arabia. Here, people walk on a central street in the heart of Jeddah historic center.
Image credit: Jordan Pix / Getty
Mohammed Hussein Al Amoudi, 71, moved from Ethiopia to Saudi Arabia when he was 19, and began amassing his fortune from government-contracts in real estate and construction, according to Bloomberg. Now, the father of eight owns businesses across multiple industries, including oil, mining and agriculture, in Saudi Arabia, Ethiopia and Sweeden. 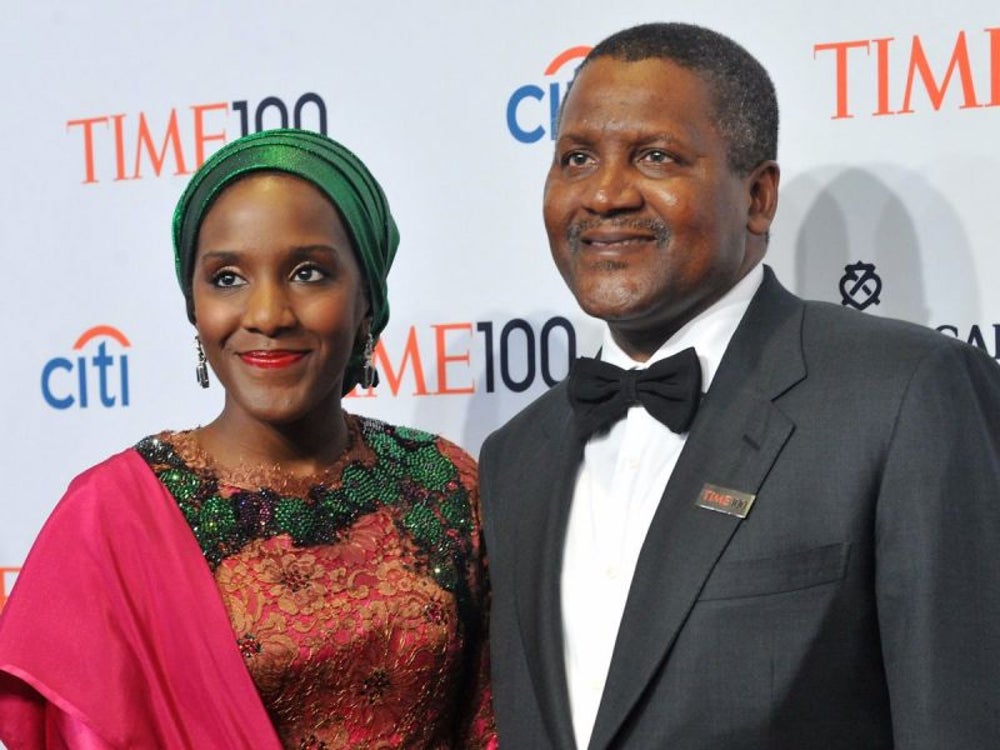 Halima and Aliko Dangote.
Image credit: Ben Gabbe/Getty
The wealthiest man in Africa is Nigerian Aliko Dangote, 60, who has been CEO and president of Dangote Group for 35 years. The majority of his fortune comes from a more than 90 percent stake in Dangote Cement, Africa's largest producer of cement, which is traded on the Nigerian Stock Exchange. He is also an active philanthropist, serving as chairman of The Dangote Foundation, which focuses on education, agriculture and health-related initiatives.
More from Entrepreneur