An upstart maker of glass baby bottles gets the attention of green-friendly VCs.

By Gwen Moran
July 16, 2010
This story appears in the August 2010 issue of Entrepreneur. Subscribe » 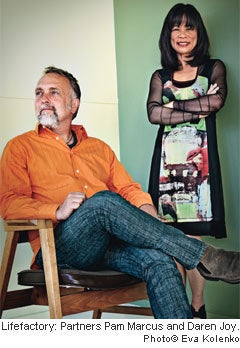 "I started reading some articles about the dangers of plastics and felt there was too much disposable plastic in the hospitals," she says.

So in 2005, Marcus contacted architect and designer Daren Joy, who had remodeled her home near Berkeley, Calif., a few years earlier. The two agreed it was possible to improve on plastic baby bottles with a well-designed, environmentally friendly option. Joy designed a glass bottle in a silicone sleeve, free of toxins such as Bisphenol A (BPA), phthalates, polyvinyl chloride (PVC) and polycarbonates. In 2007, the two launched Lifefactoryin Sausalito, Calif., with $750,000 from family, friends and a "small investment" by Greenhouse Capital Partners of Sausalito to manufacture and market the bottles, as well as to develop new products.

The partners had met Greenhouse founder and managing partner Peter Henig through a mutual contact and he had taken a shine to the fledgling company. Even during a recession, the company doubled its revenue in less than two years, a growth fueled by both the strength of its product design and media coverage of BPA and other baby-bottle toxins as the bogeymen of the baby-feeding world.

"We saw a company that was growing despite a horrible retail outlook," Henig says. "Even though we weren't looking for a company in the baby space--it's too narrow a niche for us--it was interesting." The investors also liked that Lifefactory was capital-efficient and pursuing a market segment that was largely being ignored, he says.

During the next three years, Henig was satisfied enough with the company's performance that Greenhouse joined with Big Sky Partners in Los Angeles to lead a $1.65 million Series A funding round that closed in April. Managing director Katie Schwab of Big Sky joined Henig on Lifefactory's board of directors.

Marcus says the money will be used to further promote Lifefactory's new adult water bottle, launched in February. It has landed on the shelves of retail giants such as Whole Foods and Pharmaca.

The company also plans to beef up sales and marketing staff and efforts to continue growth. For that, VC insight will be invaluable, Marcus says.

"It's so convenient for us, as a small, inexperienced startup to work with Greenhouse and Big Sky and use their resources, get their guidance and recommendations," she says. "We were lucky to find a fund that got our story and was interested in investing in us at such an early stage."