Entrepreneur's Nonprofit Rolls Out a Nontraditional Shelter for the Homeless

By Gwen Moran
September 9, 2011
This story appears in the September 2011 issue of Entrepreneur. Subscribe » 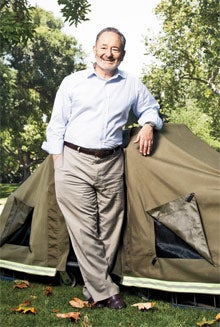 He's got it covered: Peter Samuelson with an EDAR unit.
Photo© Jeff Clark

The disagreement started at dinner. It ended on Skid Row. Media entrepreneur Peter Samuelson thought Richard Riordan, the former mayor of Los Angeles, didn't fully appreciate the extent of the county's homeless issue. So Samuelson asked Riordan to join him to sleep out on L.A.'s Skid Row, a downtown area known for its homeless population. Last November, after sleeping among an estimated 200 homeless people, Riordan wrote a check for $10,000 to Samuelson's nonprofit Everyone Deserves a Roof, which provides homeless people with rolling shelter units called EDARs, a name that doubles as the organization's shortened moniker.

Samuelson has a long history of entrepreneurship and philanthropy. He's the co-founder of Splashlife, a membership network that targets millennials; the producer behind such films as Revenge of the Nerds, Arlington Road and Tom & Viv; and the co-founder, with Steven Spielberg and General H. Norman Schwarzkopf, of the Starbright Foundation.

Samuelson first took an interest in the issue of homelessness from the seat of his bike. A cyclist who frequently rides a 15-mile route from his home to the beach, he started to notice more people sleeping in boxes or on benches along the way. One night, he asked a woman where she slept. She took him to a patch of land next to the San Diego freeway. Her home: a large cardboard box printed with the high-end refrigerator brand name Sub-Zero.

"That was my epiphany," Samuelson says. "This woman had the box, and I had the refrigerator."

Housing L.A.'s homeless population, which numbered nearly 60,000 at the height of 2008's economic downturn, would cost a staggering $3 billion--an impossible sum to raise. Instead, Samuelson decided to explore a nontraditional way of helping. He approached students at a local art school, as well as a shopping cart fabricator, to help him design and produce a mobile unit that could provide shelter and dignity--at a cost of no more than $500 per unit.

The result: a four-wheeled unit that resembles a collapsible grocery cart, covered by an adaptable, weather-resistant tarp. When folded up, the EDAR can transport people's belongings; when opened, it becomes a covered cot that provides some privacy and protection from the elements. A brake-and-locking mechanism keeps the unit from drifting.

"The EDAR doesn't claim to be a permanent fix for homelessness--far from it," Samuelson says. "But it's something we can do now to help."

Since the first prototypes rolled out in 2008, about 400 EDAR units have been distributed in Southern California, Phoenix, Denver and Camden, N.J., with 100 more to be released in 2011. Samuelson is actively looking for partners to fund and distribute the units nationwide. He is also examining opportunities to sell the units to organizations like the Federal Emergency Management Agency or forestry groups to provide emergency sleeping units.

"I look forward to the day when all of the EDARs are unnecessary and we can collect them, recycle them and everyone can dance in the streets," says Samuelson. "But with as many as two-and-a-half million people homeless in the United States, I wouldn't plan for it any time soon."