Expertise in the Field

By Carol Tice
October 8, 2009
This story appears in the November 2009 issue of Entrepreneur. Subscribe » 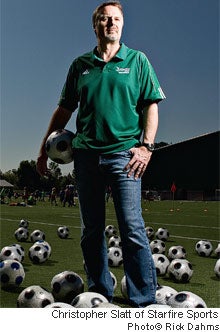 When Seattle entrepreneur Christopher Slatt set out to create a place for underprivileged youth to play soccer, he approached the project with the same strategy and ideals he applies to for-profit ventures.

"I wanted to lift up everything I learned from the school of hard knocks and apply those skills to the nonprofit side," Slatt says.

Slatt led his second startup, WatchGuard Technologies, to a $45 million initial public offering in 1999. Last year, he co-founded a network security firm, Napera Networks. But he spends most of his time at Starfire Sports, the 6-year-old nonprofit he co-founded with fellow Seattle entrepreneurial soccer dads Mark Bickham and Steve Beck.

Slatt learned that launching a nonprofit that requires a world-class soccer stadium involves taking steps as bold as those needed in the high-tech world.

When Slatt lamented to his general counsel that he wished Seattle's King County would lease him a south Seattle park in an economically depressed area, a phone call by a board member to the county's accountant led to a long-term public/private partnership at the park, which was slated to be mothballed. Slatt plunged ahead when the group had to build with no time for a capital campaign, even when construction costs soared from $6 million to $12 million.

In the past year, the Major League Soccer team the Seattle Sounders signed up to use Starfire as their practice facility, giving the nonprofit additional cachet and revenue. Starfire also hosts tournaments that attract paying amateur players of all ages from around the region.

Slatt's next project is to launch a fundraising campaign to retire Starfire's debt. The charity also plans to sell naming rights for the soccer stadium to raise cash.

An after-school study program in collaboration with a local charity that serves foster children was recently added, enabling underprivileged kids to hone their soccer skills while they continue their academic advancement.

Starfire, Slatt says, has redefined his concept of success. "I've sold firewalls around the world and been real successful at it," he says, "but the rewards here are so different--just seeing young kids from different backgrounds, all playing together, with smiles on their faces."