An online effort to connect farmers with consumers trying to buy local gets a million-dollar VC infusion.

By Gwen Moran
October 20, 2010
This story appears in the November 2010 issue of Entrepreneur. Subscribe » 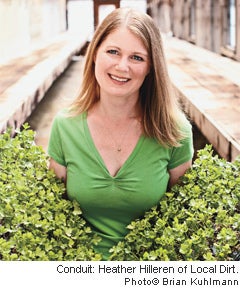 When she worked as a team leader at Whole Foods Market from 1996 to 2005 in Madison, Wis., it drove Heather Hilleren crazy when the retail giant, which prided itself on working with local farmers, had trouble finding and buying from them. She watched as one store's pool of farmers shrank from nearly two dozen to just a few.

Some farmers failed to drop off price sheets or were hard to reach to confirm pricing changes. Buyers would have to purchase from a regional distribution center to fill supply demands, Hilleren says. Produce often came from several states away and wouldn't be as fresh as customers expected, so sales would suffer.

"We ended up throwing out $600 worth of morel mushrooms because they went bad," she recalls. "We ordered a pallet of sweet corn. I know it was at least a week from when it was harvested before we got it on the shelf. It looked perfect, but it tasted like a potato." She estimates the store threw away three-quarters of the pallet.

By 2005, Hilleren had earned an MBA from University of Wisconsin Business School. As one of her class projects, she had developed a plan to use the power of an online interface to facilitate buying between local farmers, distributors, cooperatives, retailers, restaurateurs and even individuals. Hilleren cashed in her savings--mostly Whole Foods stock--and retirement accounts and launched Local Dirt in Madison that year. In 2007, she landed a $600,000 National Science Foundation grant. However, the money could be used only for development, not marketing, so she had trouble getting the word out on a broad scale.

In 2009, Mark Jacobsen and his colleagues at O'Reilly AlphaTech Ventures in San Francisco, an early-stage venture fund, were looking to invest in the local food movement. "It's not something you'd expect because engineers, software developers, usually get passionate about code, right?" Jacobsen says. "But we're seeing them get passionate about local food. Some of them were literally putting chicken coops in their backyards."

Jacobsen and company came across Local Dirt, and Hilleren's ability to build a robust site in a frugal manner made her instantly attractive. By early this year, Hilleren had received approximately $1 million in new investment from O'Reilly and Boston-based Peak Ridge Capital.

She's using the money to get the word out nationally and to continue to build her offerings for her site, which she says has thousands of farmers, distributors and buyers. Hilleren wants to offer electronic ordering services for local grocery store buyers, who can simply go online, check local farmers' inventory and buy what they need. Eventually, she plans to charge a subscription fee--probably $360 per year--to wholesale buyers and sellers.

The site saves the average wholesale buyer about four hours a week, Hilleren says. In addition, it gives farmers a new sales venue, and it offers transparency. "People can actually find out when the product was harvested and what the growing practices were that went along with it," she says. "All products need to be farm-identified, so people know what they're buying and where it came from."