By Gwen Moran
March 12, 2010
This story appears in the April 2010 issue of Entrepreneur. Subscribe » 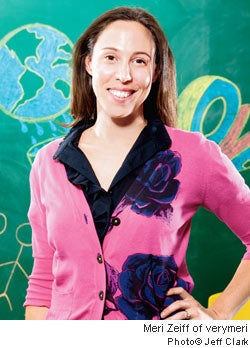 It grated on first-grade teacher Meri Zeiff to see her pupils coming to school with T-shirts emblazoned with "Spoiled Brat" or other negative messages. "That's not how happy kids think. That's how a jaded adult tells a kid to think," she says. She voiced this complaint frequently, often saying that she wanted to create her own shirts for kids. Finally, after several years, her mother got sick of hearing her talk about it and, in 2006, handed her $2,500 to help her launch verymeri, her Encino, Calif., T-shirt company.

Zeiff immediately went to work, turning to her pupils for inspiration and advice. During recess, she polled them about what they would like to see on T-shirts and found her instincts were right on. No "I'm with stupid" responses here. Instead the kids shouted out messages such as "First grade rocks!" "Go green!" and "I love Mommy!"

She narrowed down the responses and, with her seed money, had some T-shirts and a rudimentary website made. She invited mothers from the school over to see her new collection. About 20 showed up, and their responses--she sold out of the T-shirts--showed she had a viable business.

So she put her teaching career on hold and devoted herself to the company, creating a business where children younger than 18 can submit designs and customers can vote on their favorites. Winners are added to the verymeri line and receive 3 percent of profits from their designs.

But Zeiff wanted to do more than just create a happy T-shirt empire. From the beginning, the company had a charitable component, donating part of its profits to a program called Free Arts for Abused Children. However, as the company began to grow, Zeiff thought it was more empowering for children to be able to support the charities of their choice. Today, each winning designer chooses his or her favorite charity, and another 3 percent of profits from the sales of the $24 shirts are donated to that organization.

To date, Zeiff estimates that about $50,000 has been donated to various charities. She says this component allows children to voice their concerns and act on the issues that matter to them in the world.

The company also runs school fundraisers. Schools can create their own school spirit shirts in the same contest format. Students vote on a winner, and 20 percent of that design's profits go back to the school.

Despite her success, Zeiff says the call of the classroom is still strong, and she plans on returning to teaching one day. But for now she and her small team--an assistant, a few sales reps and a freelance publicist--are continuing to spread the positive word across tiny bodies everywhere.