The Most Altruistic Shopping Spree Ever

By Carol Tice
January 19, 2010
This story appears in the February 2010 issue of Entrepreneur. Subscribe » 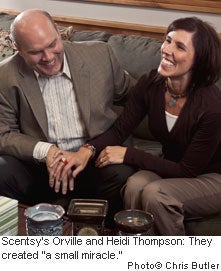 When wickless-candle company Scentsy of Meridian, Idaho, approached its fifth anniversary last summer, owners Orville and Heidi Thompson wanted to celebrate the milestone. But with their hometown, near Boise, hit hard by the recession, blowing $25,000 or more on a party for their 350 local employees seemed to strike the wrong note.

Instead, the founders decided to share their good fortune--sales neared $200 million last year--with the town's small businesses. Upping their budget to $100,000, the couple deputized 1,000 of their employees, family members, vendors and friends with $100 each to spend at local stores.

The resulting campaign didn't just fill local retailers' coffers, the Thompsons report it also made employees feel proud of their company and created positive buzz about Scentsy that lingered like the fragrance from one of its scented candles. One grateful retailer covered their own doors with the words "Thank you Scentsy­--What a Gift!"

When the designated shoppers converged on Meridian shop owners on a Saturday in July, retailers could hardly believe their good fortune. Olsen Gallery Gift & Framing store owner Amy Turner says 50 people arrived at her store en masse, crowding in to spend $2,500. Most bought gift certificates, ensuring customers would return to redeem them and possibly spend more.

"I cried. I really did," says Turner, who since has moved the gallery to a less-expensive space in nearby Emmett, Idaho. "It was extra-special slow in the summertime, and I had been praying for a small miracle."

The reaction from employees and the community was so positive that Scentsy's shop-local initiative grew into Contribute 2009 (scentsycontribute.org), a national campaign that held three more shopping days last fall.

Going national allowed some of Scentsy's more than 67,000 consultants, who sell the company's products through home parties, to participate in the program. In mid-October, 4,000 people had pledged online, adding $200,000 to local small-business coffers around the country. Orville Thompson says those who pledged often reported they brought friends along on their spending sprees, who in turn gave locally without officially pledging on the website.

The Thompsons estimate that at least 20,000 people spent $1 million to help support hometown businesses. And the pair has already heard from other businesses that want to sponsor their own give-local campaigns.

"It matters how the money we have is spent," Orville Thompson says. "With thought and a little heart, you can make a big difference."