With as Little as $500, These Entrepreneurs Created Multimillion-Dollar Businesses. Learn Their Secrets.

Successfully launching two tech businesses with almost no startup money made it easy for Mike Michalowicz to attract venture capital for his next enterprise, an angel investing company called Obsidian Launch. But in a clear case of "be careful what you wish for," Michalowicz took the money, then saw his new startup flop, victimized by what he says in hindsight was poor decision-making brought on by a lack of urgency.

"I've started a business with nothing, and I've started one with a lot of money, and I have to say I'd rather start with nothing," says Michalowicz, author of The Toilet Paper Entrepreneur, whose latest venture is New Jersey profit and growth accelerator Provendus Group. "Nothing forces you to make better and faster decisions, because you feel the pain of every mistake acutely. You're more apt to respond quickly to what works and what doesn't when you don't have a lot of money. When I failed with Obsidian Launch, I didn't feel the pain. I just threw more money and more time at it, which made things worse."

The takeaway is that lack of cash won't keep a good business idea--at least one that's executed well--from succeeding. And it's not just Michalowicz who has proved it. Take a cue from our cross section of successful businesses whose founders used their resourcefulness and hard work to create multimillion-dollar enterprises. It's time to start thinking big.

Door to Door is poised to grow to more than $40 million this year.
Photo © Jonathan Castner

Even as he was disassembling cardboard boxes in a garage that served as the warehouse for his just-launched organic produce home-delivery venture, David Gersenson's gut told him Door to Door Organics was destined for big things.

"I was breaking down the numbers as I was breaking down the boxes, and I knew this thing was going to take off," he recalls of that moment in 1997 when he foresaw the future of his company. Started for about $700 in Upper Bucks County, Pa., the business was based on an idea he hatched in his early 20s after eating organic produce on a trip to India.

While Gersenson's vision proved prophetic, he could hardly have predicted the outcome of the strategic decisions he made along the way to turn Door to Door Organics into the bustling multistate company it is today. The online grocer of natural and organic products employs more than 200 people in five metro markets around the country, posted $26 million in revenue in 2013 and is projected to grow to more than $40 million this year.

How He Did It
David Gersenson, Door to Door Organics

• Operated on the cheap, even after years of profits and growth.
• Evaluated operations regularly to find more efficiencies and reduce costs.
• Realized when it was time to hand over the reins to someone who knew how to grow and run a bigger business.

From the start Gersenson focused on residential deliveries and eschewed commercial customers, whom he says could have easily become competitors. Relying almost exclusively on word-of-mouth to cultivate a customer base, he operated the business frugally, waiting years (until the venture had a couple hundred customers) before hiring staff. During that time Gersenson handled customer service, did all his own billing and even made some of the deliveries himself (enlisting UPS for others).

That workmanlike approach helped Door to Door become profitable within two years. But in 2004, when growth plateaued in eastern Pennsylvania, Gersenson decided to move to Boulder, Colo. It was a personally motivated lifestyle decision that also proved great for business, as it established the company in a regional epicenter of the organic-foods and locavore movements.

Once in Colorado, Gersenson forged supply relationships directly with local farmers and regional trucking and distribution companies to bring groceries to his customers. Then, drawing from the capital reserves his cost-conscious ways had helped build, Gersenson assembled an in-house delivery fleet so he'd no longer need to rely on UPS. He says these moves significantly improved quality, strengthened the supply chain and cut costs.

Finally, with annual revenue hovering just above $3 million in 2009, Gersenson sought out a consultant's guidance for growing the business. That consultant, Chad Arnold, became Door to Door's CEO in 2010. "David was at the point of asking 'What do I do now?'" Arnold recounts. "He was trying to figure out how to scale the business, and I knew how to do it."

As for Gersenson, who retains a seat on Door to Door's board of directors along with a significant minority stake in the company, one of his only regrets is holding the reins as long as he did. Hiring Arnold, he says, "was the greatest decision I ever made. My goal was always to step away to let someone else take over. I had no ego attached to that."

Reinvention is a panic move for some ventures. For Peach New Media, it's part of the normal course of business. The software reseller Dave Will launched in 2001 out of his basement for $2,600 emerged from its subterranean beginnings--and multiple strategic pivots--as a solidly entrenched SaaS provider in the learning content management space.

The company packages its own webcasting and learning software platform (the Freestone Learning Management System) with related tools and services to help clients (such as state bar associations and CPA societies) deliver educational material to their constituents. Last year the Atlanta-based company's revenue grew to several million, with some 250 clients and a work force of 36.

Will acknowledges that he didn't plot the tortuous path Peach New Media took to prosperity. But he also says the company wouldn't be thriving today without his willingness to pivot from one business model to another when opportunity knocked. Over a dozen years, the venture has recorded double-digit growth each year, including a 32 percent jump in 2013.

How He Did It
Dave Will, Peach New Media

• Limited debt and resisted outside investors.
• Pivoted only when opportunities presented themselves.
• Created a strong product with recurring revenue streams built into it.

"A lot of organizations have boundaries around what they should or should not be doing, so they don't pay enough attention to the market or what their clients are asking for," he says. "We've changed our business model dramatically to take advantage of opportunities, and that has allowed us to be much more profitable."

Will says it was an unexpected layoff from a systems-integration consulting job in 2001 that left him at a crossroads: "Work for The Man again or do something myself." He chose the latter, spending $2,600 for a pool of licenses to sell web-conferencing tools to consumer-goods retailers. With a few hundred dollars more, he set up a makeshift basement office.

For a while the venture generated enough revenue to sustain itself and put food on the table. But within two to three years, amid rapidly growing competition, Will made his first pivot, guiding Peach New Media into managing web-based events for clients such as Wal-Mart.

Soon it dawned on him that the template for his company's web-based learning portals had a market outside the realm of consumer packaged goods. It was time for a second pivot, this one from a service-centric to a product-centric model. "We realized we were creating something that people wanted to buy--our learning content management software. So we shifted to an SaaS model that allows us to sell services on top of our software and build a new and recurring revenue stream with our existing customers," he says.

All pivoting aside, Will maintains a resolve to grow his business methodically. Restraint, he claims, has served him well. He's resisted accepting venture capital so he can retain control of the company. He didn't even hire an administrative assistant until he'd been in business for more than a year; it took him three years to move out of the basement and into an actual office, and four years to hire his first salesperson.

Focus has also been key to Peach's ascent. "One of our mantras is, 'Expansion by contraction,'" he says. "Despite our history, we've been careful not to grow by pursuing every new concept that comes along--as tempting as that can be--but by becoming laser-focused on what we do best." 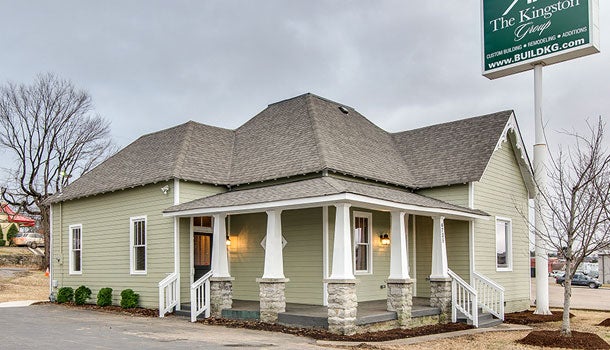 For a construction startup, the timing could not have been worse. In 2007, months after childhood friends Ricky Scott and Robbie Edwards opened The Kingston Group, their Nashville, Tenn.-based residential construction and remodeling firm, the local real-estate market tanked.

But it wasn't long before some of the highly leveraged, now-idled contractors and developers with whom Scott and Edwards competed slid into bankruptcy. Meanwhile, The Kingston Group's grounded, risk-averse approach to growth helped it add clients and build revenue, even as economic and local market conditions continued to deteriorate.

It was survival of the fittest, and the restraint and resourcefulness that equipped The Kingston Group to survive the economic downturn are helping the company thrive as one of the few still standing.

How They Did It
Ricky Scott and Robbie Edwards, The Kingston Group

• Reinvested in the business with new employees, equipment and office space.
• Hired quality staff.
• Focused heavily on networking and word-of-mouth to build initial customer base.

Launched for about $500 to cover licensing fees, the company spent its first two years operating out of a spare bedroom in Edwards' home with little more than the tools, equipment and computers he and Scott already owned. Legal documents were drawn up inexpensively, using online tools whenever possible. The company's marketing campaign initially consisted of little more than a Facebook page, periodic e-mail blasts and a commitment by the two founders to work their personal networks relentlessly. "Having a good network, and using it, is vital to getting a business off the ground," Scott says.

When revenue began to flow in, the partners resisted the temptation to follow the fix-and-flip housing-renovation frenzy that doomed many of their competitors. Instead they focused on their core competencies: custom builds and remodels for which clients paid deposits upfront and in full upon completion.

"It was about starting slow and making sure we built a strong foundation," Scott says. "Instead of leveraging ourselves, then having to use revenues to pay down debt, we were conservative and reinvested in the business. Now we're seeing the fruits of being debt-free."

Even without a formal business plan, the startup generated revenue of about $340,000 its first year and recorded $3.9 million in work in 2013, up from $2.38 million in 2012. Now, in addition to its founders, The Kingston Group has eight full-time employees, among them an office manager who freed Scott of administrative duties so he can focus on sales and strategy.

Part of that strategy is to continue reinvesting in the still-young company, such as the recent purchase and renovation of its own office building. Says Scott, "We've reached a point where we can now focus on building our tangible assets and our human assets."