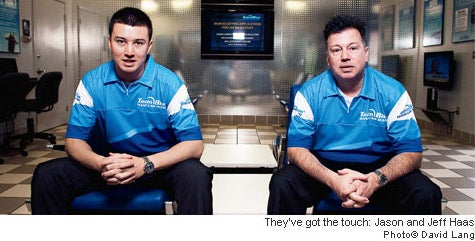 A year after graduating from Stanford University, Jason Haas got a daunting assignment from his father: Create a franchise concept the two could develop together. Jason--who was earning a shoe-leather MBA at the family architectural and construction firm in State College, Penn.--freaked out a little. But soon enough, he had a plan for Team Blue , a fast, affordable hand carwash. Now, team Haas is preparing to roll out 35 carwashes in the next two years.

It seems Jason has inherited some family magic. His father, Jeff, has a knack for dreaming up and building successful businesses--not only did he create and eventually sell Bubba's Breakaway, a funky sandwich franchise in five states, he's also put up pizza places, bars, casual dining restaurants, printing firms, the construction company and invested in a dozen other ideas. This father and son know when to build a franchise--and when to throw in the towel.

How do you know when a business is right for franchising?
Jeff: I've been doing this for almost 30 years, so you get a feel for what works. Do we do all kinds of surveys and extensive research? No. That leads you to do nothing in some cases and just gives you a reason not to do something. You have to go by gut instinct to make it happen--and I realized early on you have to make changes to make it happen.

What kind of changes?
When I started Bubba's Breakaway, I was 22 and was trying to sell pirogies based on my grandmother's recipe. Business wasn't great. I kept getting calls for sandwiches and delivery, and I saw that was the great opportunity. When I started Pennsylvania Pizza, I planned on franchising. But the late '80s pizza wars broke out, and I realized I couldn't compete with the expanding national chains. So I added a bar and beer sales and just made it a great local place. You have to be flexible.

What's the No. 1 key for success?
Few things will happen if you don't plan to make them happen. When I was working 18 hours a day with my first business, I took a piece of paper and wrote down every single thing that was wrong and what it would cost to fix it. I implemented that paper and the business took off. Owners need to step back and look at their business objectively. You need objectivity to be successful.

Jason, do you have your dad's instincts?
At first, when he asked me to think up a franchise, I was scared and thought, "Are you serious? How am I supposed to come up with a business?" But my dad and I both love cars, and I worked with that. I washed his car for $2 when I was a kid, and he washed his dad's for a quarter. The carwash concept we use today duplicates what I used to do in the driveway at 16.

Why is Team Blue a franchise?
Jeff: Once I investigated it in terms of costs to open, revenues and expenses at unit level, my eyes became wider and wider because of the expansion possibilities. We could tap into something that wasn't going on in the $23-billion carwash industry: A 100-percent hand carwash just like you would do at home in about 15 minutes for $18.95.

Would you've done this without Jason?
While he was at Stanford, I was champing at the bit to create another franchise. But I didn't want to start until Jason came back so he could feel what it's like to make something from nothing.