A Mobile Franchise Brings the Party to Kids 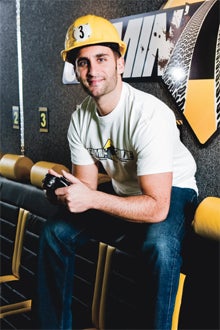 Michael Falgares' idea came to him during a trip to Amsterdam: Why not make video games portable? In 2008, he traveled with his father, Phil, to the Netherlands to check out the latest in video game technology, a dance pad called iDance that lets up to 32 players participate at once. The Falgareses signed up to become U.S. resellers.

But the younger Falgares, of Asbury Park, N.J.--who has taught first grade, fifth grade and special education, owned a preschool and worked as a DJ-- wasn't interested in just selling the pads. So he had a trailer outfitted with 16 vibrating gaming seats and flat-screen TVs, installed a rockin' sound system and plugged in gaming systems with a huge assortment of the latest games. Add to that the iDance pads, laser tag and a ball cannon, and Gamin' Ride was born.

A little more than a year after the first trailer started pulling up at parties (two-hour packages start at $299), Gamin' Ride has 18 mobile gaming theaters in seven states and has sold master franchise rights in Mexico and India. The theaters also are a hit at store openings, game launches and corporate events.

Falgares hit pause to tell us about his mobile success.

Where do you get your trailers?
A company in Indiana makes them for us, and it puts up the aluminum walls and all the finishing touches, like security alarm systems, big lights, awnings and storage.

What's the response been?
I had three people coming in for a prospect day to see if they were interested in buying a franchise. They came to a party in Jersey City. Cars kept stopping to find out what we were all about, and we needed all three prospects to hand out cards and tell people about Gamin' Ride. It was the best situation--I couldn't have orchestrated it myself.

What happens on weekdays?
We have something called Earn and Burn--we earn money for schools and kids burn calories. Franchisees go into schools with the iDance and set it up so 150 kids can play the dance game. The kids exercise, raise money and win prizes like time in the Gamin' Ride trailer or laser tag. The schools do very well, and we do a 30/70 split.

Are girls into this, too?
In our first year, it's been about 20 percent girls, 80 percent boys. So in April, we're launching four units of Glamour Ride. It pulls up to a house, and the girls get "before" photos. Then on the trailer they all get ready for the "big show": getting their hair done, mani-pedis and glitter at stations in the theater. At the end of the party, the side of the trailer folds down and becomes a stage, and parents can watch the girls put on their show. There are also arts and crafts, karaoke; and they can stuff their own animals.

What's your favorite video game?
I actually don't like video games. I've never had an interest. I just want people to have good time.