How to Raise Cash With Crowdfunding 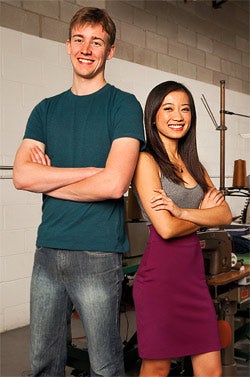 Crowdfunding sites are putting money in the pockets of budding entrepreneurs like Sam Miller and Leona Liu, founders of jeans company Civali.
Photography by Tom McKenzie

Crowdfunding sites like Kickstarter and IndieGoGo attract hobbyists and wannabes, but they can also net real cash for those who use them strategically. With savvy profiles and targeted campaigns, some aspiring entrepreneurs are even raising amounts in the five or six figures. Here's how they do it.

Sam Miller was so sick of not being able to find jeans that fit that he decided to start a business to solve the problem. He and his partner, Leona Liu, spent nearly two years studying how they could create a company that would deliver custom-made, U.S.-manufactured jeans at a $60 price point. They sketched out a plan for Chicago-based Civali, sourced the technology they needed and then ran into a common entrepreneurial problem: no money. At the same time, they had no interest in having "investors breathing down our back," Miller says.

The two found the kick in the pants their business concept needed from the crowdfunding website Kickstarter. They launched their funding campaign in July 2011, eventually surpassing their original goal of $29,000 and raising more than $47,000 from 404 backers.

Aspiring entrepreneurs are increasingly jumping onboard with sites like Kickstarter, IndieGoGo, peerbackers and ChipIn. Now, as the concept becomes more well-known, users have become savvier about creating interesting profiles, targeting their audiences and promoting their offerings. Some are even managing to raise funds in the five and six figures.

The poster boy for successful crowdfunding is Scott Wilson, who worked on his LunaTik watch design as a pet project while running his Chicago-based design consultancy, Minimal. Wilson, a former creative director for Nike Watches, conceived a wristband that would hold an iPod Nano so the device could function as a watch. He'd heard buzz about Kickstarter, but his employees scoffed when he suggested a campaign for the LunaTik design in November 2010. Wilson had the last laugh, though. In 30 days, he far surpassed his goal of $15,000: He ended up raising nearly $1 million to develop his innovative design, the largest amount of money ever raised on Kickstarter.

"People get excited about it," says Kickstarter co-founder Yancey Strickler. "They're not just buying the thing--they want to help make it happen. They feel like they get a greater piece of it."

When those creative ideas solve a popular concern or problem, all the better. Houston-based LuminAid Lab raised more than five times its $10,000 goal to develop its solar-powered inflatable light during a 40-day campaign on IndieGoGo in November and December of 2011. U.K.-based eMakershop, meanwhile, raised nearly $160,000 on IndieGoGo for its 3-D printer concept.

Crowd Mentality
Selling the masses on an idea requires a well-crafted profile page, says Slava Rubin, co-founder and CEO of IndieGoGo, and key to that is a persuasive video component. In fact, the company has found that campaigns that include videos raise 114 percent more money than those without.

The consensus is that showing at least one of the people shepherding the idea to creation is important, as is getting to the point quickly. Kickstarter's Strickler says it's a good idea to front-load the video with the most important points, assuming that people are going to click "stop" after about 30 seconds.

Before taking to Kickstarter with their jeans concept, Miller and Liu spent about two months studying successful campaigns; LunaTik's Wilson shot his own video at his kitchen table on a Sunday afternoon.

Offers in exchange for funding are also important. IndieGoGo has found that 93 percent of campaigns that reached or surpassed their targets included perks, such as presales of the product in development. Seventy percent of successful campaigns included between three and eight perks, most correlating to levels of funding.

Miller and Liu used the exchange approach effectively. For example, $5 got a buyer listed on Civali's website (five people contributed at this level), while $60 earned a listing, plus a pair of custom-made jeans (248 people opted for this level). Ten of Civali's backers sprung for the top-tier $500 donation, which got them four pairs of jeans with custom embroidered messages delivered in a handcrafted box and a top-tier donor credit on the company's website.

Campaign Reform
Successful campaigns typically pack heavy promotion into a short period of time. Kickstarter says 30 days or less is the optimum campaign length; IndieGoGo puts the mark as high as 70 days or "as long as you can stay active," Rubin says.

IndieGoGo has found that profiles with four or more external links--to Facebook, Twitter, LinkedIn, YouTube or the company's own website--raise twice as much money as those without. Building a following and communicating via tweets, Facebook updates, e-mail and text is critical to creating momentum and keeping potential backers informed of the project's status. Successful campaigns usually have the first 30 to 40 percent of their stated goals funded by the project owner's personal contacts.

For overachieving campaigns, bloggers and high-profile social media users have proved critical. Ten days before the end of their campaign, Miller and Liu saw a $10,000 jump in funding after Crain's Chicago Business tweeted about their story. LuminAid founders Andrea Sreshta and Anna Stork e-mailed product descriptions and specs, along with a few photographs, to bloggers who cover sustainability issues. Once a few of those bloggers picked up the story, more followed suit--even those the duo never contacted. The coverage fueled a stream of $800 to $1,200 in funding per day, Sreshta says.

LunaTik's Wilson found similar success via the blogosphere. Just prior to launching his project, he sent information about his watch to a design blogger with whom he had discussed his project two months earlier. The story broke at about 8 a.m., and soon several other high-profile bloggers picked it up and ran with it. By 5:30 that evening, Wilson's project had earned its first $6,000. Feeling good, he left to meet his friend for a beer at a local bar. At 6 p.m., his wife, Nicole, texted to tell him the campaign had reached $22,000.

Such sites can help build loyalty, provided there is follow-through. Wilson fulfilled approximately 13,500 pre-orders from the watch campaign, and LunaTik has been spun off into its own profitable company--one that's separate from his design firm.

In mid-December 2011, Wilson launched a Kickstarter campaign for the LunaTik Touch Pen, a pen-stylus hybrid. Within three days, fundraising shot past the $75,000 goal; by the end of the month it exceeded $160,000, with 40 days left in the campaign. 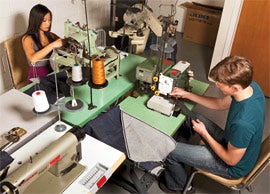 As the sites become better known, additional benefits kick in. Strickler says Kickstarter has become a go-to place for bloggers and journalists looking for compelling startup stories. Actively posting updates, tweeting and otherwise promoting your campaign also gets the attention of the crowdfunding sites themselves, which can boost visibility. IndieGoGo promotes campaigns based on their "GoGoFactor," an algorithm that tracks funding, updates, comments and page views. Those with high GoGoFactors get prominent placement on the site, thus generating more traffic.

Miller and Liu say they are still getting inquiries from their Kickstarter campaign, noting that Civali will be fully operational by late summer and will fulfill its approximately 600 pre-orders shortly thereafter. They may launch another Kickstarter campaign later this year. Miller says he is confident that by adding a professionally shot video and heavier promotion to the following they've built, they can raise more than they did in their first campaign.

Product presales and perks for funding are popular elements of many crowdfunding campaigns. But don't offer equity or a financial return on investment in your company in exchange for donations, as that can quickly put you on the wrong side of state and federal securities laws, according to C. Steven Bradford, a law professor at the University of Nebraska-Lincoln who has studied crowdfunding sites.

"It's not as much the word investment as whether you're offering an investment," Bradford says. "[Offering] profits, shares of profit, interest on your money or calling it a security, stock or bond could trigger securities issues."

One site, ProFounder, tried to skirt securities laws in two ways. First, it limited offers to existing acquaintances, which is allowed under Securities and Exchange Commission Rule 504. Second, it structured public offerings that were repaid from the business's earnings without profit, so they arguably weren't securities, Bradford says. In August, the California Department of Corporations filed a consent order to desist and refrain, alleging that the site was selling securities without a license.

Now Congress is getting involved. In November, the U.S. House of Representatives overwhelmingly passed H.R. 2930, the Entrepreneur Access to Capital Act, which would relax securities laws and allow entrepreneurs to raise up to $2 million annually from crowdfunding with audited financial statements (or $1 million without). A similar Senate bill, S. 1791, the Democratizing Access to Capital Act (now pending), would allow companies to raise equity investment of up to $1 million annually. Each bill limits the amounts individuals can invest in a project.

"[Currently] the definition of a broker is really indefinite, and the SEC takes a pretty broad position," Bradford says. "Both bills make it clear that those website intermediaries would not be considered brokers for the purposes of federal securities laws."

Why Seller Financing Could Save Your Acquisition Deal From Disaster

Your Guide to 2020 Year-End Tax Planning