How Green Power Can Benefit Both Small Retailers and the Environment

By Carol Tice July 23, 2012
Opinions expressed by Entrepreneur contributors are their own. 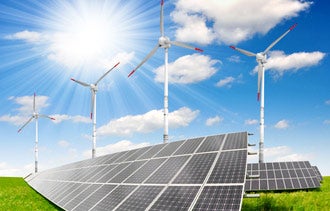 You've bought compact fluorescent light bulbs for your store, offer reusable shopping bags and stock your shelves with eco-friendly products. What else can you do to show your commitment to the environment?

Consider switching to green power. While the upfront costs of green energy can be substantial, the investment can pay off in lower energy costs down the road.

The first step is to decide on the type of alternative energy program. There are a variety of ways you can reduce your store's use of traditional energy sources, such as coal and gas, or compensate for some of the carbon emissions they generate. The most clear-cut approach is to install power generators, such as solar panels or a wind turbine, at your store. You also could buy energy from a utility that commits to obtaining some or all of your power from green sources.

Then there's the option of purchasing renewable energy credits for wind, solar, biomass and other alternative power projects. You don't use the renewable energy yourself, but your purchase helps America develop green-energy resources and reduce the use of traditional power sources.

Here are some tips from other retailers, both big and small, for how to start moving to green power:

While solar is the most common choice, it won't work for stores in rainy climates or areas blanketed by trees. For instance, Brian Great, owner of The Great Escape restaurant in Schiller Park, Ill. found solar wasn't a good fit for his site, which adjoins a forested area. Instead, he installed a parking-lot wind turbine. He spent $315,000 on the turbine, which now provides between 50 percent and 70 percent of the restaurant's power, and expects the investment to pay for itself within 10 years. Because of the wind turbine, Great estimates that 200 fewer metric tons of carbon dioxide are released into the air each year.

Some large retailers use multiple sources of green power. For example, Whole Foods Market uses rooftop solar panels, as well as fuel-cell technology and a power unit fueled by cooking oil waste. You may think your landlord won't allow such technology, but Whole Foods has found many of its landlords receptive to its requests to install solar panels, says Kathy Loftus, who oversees the company's energy program.

Seek financial help. Be sure to investigate possible state or federal financial assistance, which is usually available through programs of varying duration. Great says he received a 30 percent federal rebate through a short-term federal rebate program for his wind turbine that refunded more than $100,000 of the $315,000 price tag.

Work with an energy producer. Many utilities are moving to diversify and provide more green energy, making it easier for retailers to plug into a cleaner power source.

At Clark's Market, a grocery chain based in Aspen, Colo., owner Tom Clark connected with the Clean Energy Collective (CEC), an alternative-energy producer in Carbondale, Colo., that is hooked up to Clark's local energy grid. Clark's paid to add 40 solar panels to CEC's large, existing solar array. Now, energy from the CEC solar panels is delivered to the stores through Clark's existing utility.

Capitalize on the promotional power of clean energy. Green energy can provide marketing, as well as environmental, benefits. Great says his eye-catching wind turbine, with its 32-foot blades, has garnered free publicity for his restaurant. "It's a heck of a lawn ornament," he says. "We've been on all the TV stations, and school kids come out here on buses on field trips to learn about the environment."

PrAna, a maker and retailer of yoga and outdoor clothing, purchases renewable energy credits that fund wind-power projects because wind fits the company brand. "Prana" means "breath" in Sanskrit, according to Nicole Bassett, the company's sustainability director. "It was really smart," she says, "because of how it ties into our marketing and our branding." Starting in 2005, the company began a public education media campaign, positioning prAna as an "ambassador" for wind power and noting the environmental impact of its wind-power purchases.

Start small. Whatever approach you take to investing in green energy, it's best to begin slowly with a test program or pilot project. For instance, when the Kohl's department store chain started buying renewable energy credits in 2007 to offset its use of non-renewable power, it purchased only enough to offset 8 percent of its energy use. By 2010, the company had ramped that up to 100 percent. Starting small gives you a chance to try out the organizations that produce energy or sell credits and determine if a program if a good fit for your budget and your environmental goals.

Check credentials. If you're shopping for renewable energy credits, also make sure you buy from a reliable provider certified by the consumer watchdog program Green-e, says prAna's Bassett. Some providers of the credits didn't invest in green projects or double-sold the credits of a single plant's output, she says. She recommends two reputable providers: 3Degrees and Bonneville Power Foundation.