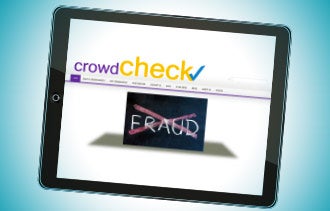 Thanks to the JOBS Act signed into law in April, startup founders soon will be able to tap average Joes and Janes for equity-based investments. To help the process along, a new crop of crowdfunding companies has already sprung up. In April, industry resource Crowdsourcing.org predicted the world would have 536 crowdfunding companies by December, up 60 percent from last year.

Joining the pack is CrowdCheck, which aims to verify the legitimacy of companies seeking crowdfunded cash. Founded in January by Sara Hanks, former general counsel on the U.S. Congressional Oversight Panel, along with attorneys Thaya and Brian Knight, CrowdCheck wants to help entrepreneurs attract investors by confirming that they're playing by state and federal rules. Provided the U.S. Securities and Exchange Commission finalizes the crowdfunding regulations before the Jan. 1 deadline, the company will launch its service in early 2013.

In the meantime, CrowdCheck is teaming up with crowdfunding platforms to ensure that the businesses listed on those sites next year are the real deal. So far, the company has announced partnerships with several websites, including EarlyShares, Initial Crowd Offering and Return on Change. We spoke with Hanks about the services her company offers this new army of entrepreneurs and investors.

We spend a lot of time on the phone with the company, checking up on all the things that it claims. We look at its certificate of incorporation. We check that it is in good standing in whichever state it has been incorporated. We check out all the statutory requirements there are going to be, with respect to background checks and the like.

We don't give any indication as to whether it's a good investment. But we say that this is a real company.

Who does the verifying?
We have 20 or so researchers signed up as contractors to do the actual work of checking out companies. These are mostly people we've worked with in our previous lives--mostly securities lawyers, though some of them might come from the banking side.

Do you plan to help companies with the disclosure process, too?
Yes. We call ourselves a "disclosure and due diligence advisor." Entrepreneurs probably are not going to have gone through a process like this before, so we'll help them get their documents together and present themselves to crowdfunding investors in a much better way.

How long will the due diligence process take?
At the most basic check, it will just be a few hours spread out over the course of maybe a week or 10 days, depending on the entrepreneur's timeline. But the highest level will be at least something like 20 hours of work. That would be for the companies that are seeking high-end crowdfunding, such as a $1 million raise. We'll be available at whatever times they want to talk. And if they want it done really fast, we'll try and do it that fast.

How will your services be priced?
We're probably talking about four different levels of checks. The most basic one is just saying, "Yes, you have met the regulatory and the statutory requirements." That's going to be somewhere in the hundreds. At the high end, we'll be going up to something like $10,000, which would be the most appropriate check for someone who's raising $1 million or doing a $1 million crowdfunding raise at the same time they're doing a Regulation D raise.

Do you offer services for investors?
Investors will be able to check on everything that we've checked. Everything's free to investors. On our website, you'll be able to see the description of financial position that the entrepreneurs have put together with our help. You'll be able to see their certificates of incorporation, their certificates of good standing. We're not anybody's lawyers. We're not an investment adviser. This is purely a verification. But it lets investors make a better-informed decision.